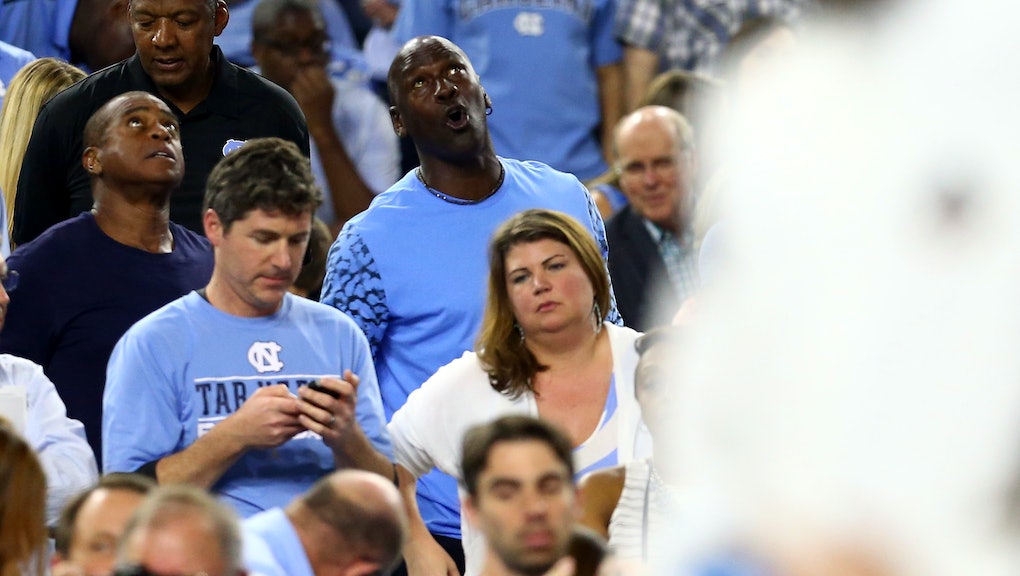 On June 25, throngs of sneakerheads will pitch tents, set up beach chairs and form lines around a block near you to buy the Nike Air Jordan 12 in Grey and University Blue, a $190 shoe you've probably never heard of and that they themselves might never actually wear.

This means nothing to the vast majority of Americans. But the lasting popularity of Air Jordan sneakers — a line of shoes that launched in 1985 and, according to Forbes, raked in $2.6 billion in sales in 2014 — remains a testament to the popularity of the man whose name they bear.

It's easy to forget this popularity came with a caveat. Michael Jordan — who is widely considered the greatest basketball player of all time — has been criticized throughout his career for an at-times striking silence on political issues. This manifested itself most famously in 1990, when black former-Charlotte mayor Harvey Gantt ran for a U.S. Senate seat in North Carolina — Jordan's home state — against racist Republican Jesse Helms.

This was not an isolated incident: Jordan's teammates have frequently knocked his political silence, especially around issues affecting black people.

"When they came to Michael after the L.A. [riots] went down and asked him what he thought, his reply was that he wasn't really up on what was going on," Craig Hodges, Jordan's former teammate with the Chicago Bulls, told the New York Times in 1992. "I can understand that, but at the same time, that's a bailout situation because you are bailing out when some heat is coming on you. We can't bail anymore."

Hodges added that athletes have a responsibility to speak out on important issues by virtue of their vast privilege and cultural influence.

"Leadership in America is the athletes and entertainers," he explained. "That's why I feel I have to start speaking out. I don't like to, I don't like to step on toes."

It's a dilemma many other athletes have had to face lately — whether to speak out about politics, or avoid ruffling feathers to become more palatable brand ambassadors.

Most recently, in December, Cleveland Cavaliers star LeBron James — who made headlines in 2012 when he organized a photo of himself and his then-Miami Heat teammates wearing hoodies in solidarity with Trayvon Martin — was inundated with calls to stop playing basketball to protest a Cuyahoga County, Ohio, grand jury's decision not to charge Cleveland police officer Timothy Loehmann for killing Tamir Rice.

James declined to do so, claiming ignorance of the issue at hand.

"[To] be honest, I haven't really been on top of this issue," he said in response to the calls, according to ESPN. "So it's hard for me to comment."

However you slice it, such silence is a privilege. Both Jordan and James have hinted at political stances in the past: In Jordan's case, it was a vague and belated rejection of North Carolina's homophobic bathroom laws — but the fact remains Jordan in particular has not made it a habit to address such issues publicly. Nor do either of them have any obligation to do so, or even keep up with them. They're rich. They're successful. They'll be fine if they say nothing, and in fact, may be better served — from a business standpoint — by doing so.

This is in stark contrast to many of their iconic forebears. Black professional athletes have paid dearly in the past for getting involved in politics. The premier example is Muhammad Ali, who died in May but courted controversy and a dramatic end to his boxing career in 1967 when he refused to be drafted to fight in Vietnam.

"Why should they ask me to put on a uniform and go 10,000 miles from home and drop bombs and bullets on brown people in Vietnam while so-called Negro people in Louisville are treated like dogs and denied simple human rights?" Ali famously asked reporters in his hometown of Louisville.

Ali was promptly arrested. He had his world heavyweight title stripped and was banned from boxing in the United States for years.

But that was then. Risking so much now has become almost unimaginable for professional athletes. Political outspokenness is not absent in sports, but the spectre of the consequences that stem from courting controversy — a loss of endorsement deals, a fickle fan base turning on you — is a clear consideration when athletes decide whether to get involved in politics, especially in an era where anti-black racism is making news headlines at a rate not seen in years.

Michael Jordan has spent most of his career in the "not" camp. It remains unclear what direct affect this political silence has on his shoe sales. In fact, it seems unlikely at this point they'd take a dramatic hit at all, since Air Jordan sneakers have become so engrained in the cultural lexicon. But one can't help but speculate: Would they have become so popular had their namesake been a political firebrand? Is it a stretch to say Jordan's broad appeal — at the expense, at times, of speaking out about things that mattered — made his sneakers so appealing to such a broad cross-section of Americans?

At the end of the day, Jordan owes his ability to sell so many shoes — as he undoubtedly will on Saturday — in part to avoiding anything that could make him politically toxic. It's not a decision that will make him a civil rights icon in the future. But it has made him very, very rich — and will continue to do so for many years.