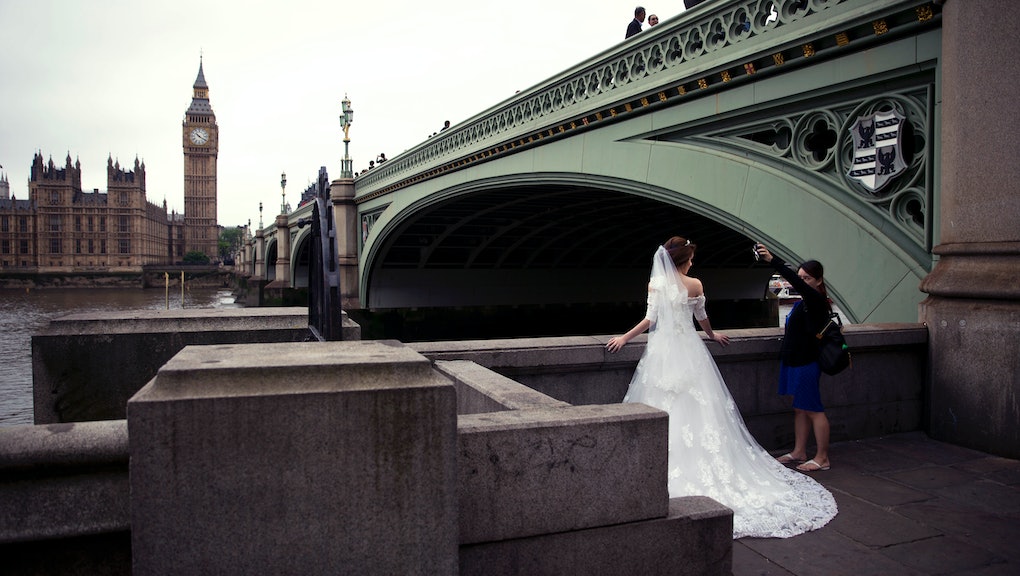 The Terrifying Effect Brexit Could Have for Mixed-Nationality Couples

"It feels like London is in shock," Asya Kovarsky, the Russian-Israeli wife of a British citizen, said in a Facebook message. "My husband is really upset about it. I don't want to move but I feel like he will not want to live here anymore."

Kovarsky works in international relations and most of her London colleagues are foreign citizens. So the Brexit, or the United Kingdom citizens' recent decision for Britain to leave the European Union, will have a huge impact on her social circle.

According to Kovarsky, fear of the future is all anyone can talk about — especially people in mixed-nationality relationships.

According to the British Office for National Statistics, there are more than 100,000 couples in London where a British national is dating someone of another EU nationality. There are thousands more foreign-born Londoners living with and dating EU citizens. Especially in the capital city, the rising popularity of relationships between non-British people of color and EU citizens was propelled by "more recent migrants" labeled as "Other Whites," 84% of which were born outside the U.K.

Currently, an EU citizen has the right to live and work in any other EU country. But with the Brexit, that could change. "At a minimum, that would mean that people moving to or from Britain would need to worry about passports and residency rules," Vox's Timothy B. Lee wrote. "And it could mean that some British immigrants may lose their right to continue living and working in the UK and be deported."

As a result, multicultural relationships are bound to get tricky. While it's unclear what will happen next, the Independent has reported that British partners might lose the right to immigrate with deported foreign-born partners to their home country, inevitably forcing a long-distance relationship or a break-up.

"We never really thought this would actually happen. I guess we would both have to move if either of us can't stay," Manchester resident Jana Bukolovska told Mic on Facebook. "It could mean going back to the beginning: me moving to Latvia, and my partner to Lithuania in case we don't come up with something else."

Reddit user lolowalsh is concerned the general upheaval will derail marriage plans with his partner from Morocco, who is trying to come to the U.K.

"We just want to to settle together and get married," lolowalsh wrote. "However, this whole referendum is making me confused."

It's too soon to say precisely how British lawmakers will reconfigure immigration policy after leaving the EU, yet couples of all kinds are reconsidering their futures in Britain.

"A lot of my colleagues are worried," Kovarsky said. "One of my [non-European] colleagues, whose partner is European...started thinking maybe their future is in Europe, not in the U.K. [The vote] could affect their visa status."

Although she has been living in the U.K. for three consecutive years, the vote could also impact Kovarsky's legal status. British law requires households to meet certain income standards in order to bring a foreign spouse. Kovarsky and her husband initially didn't make enough money for her to move as the wife of a British national, so they spent time living in Belgium and returned to London under EU law. "I am here on a visa that is because of EU free movement, so it could affect me," Kovarsky explained. If British reforms decide to reject old EU visas, she could theoretically be forced to leave.

Luckily, Kovarsky's husband found a job with higher income, so she could finally apply for a British residency if she was threatened with deportation. Not all couples, however, will be so fortunate.

Financial journalist Daniele Palumbo, who is originally from Sicily, is anxiously wondering how the Brexit will impact his relationship and family plans. It took Palumbo and his Italian girlfriend years to earn enough money to live together in London, due to the city's expensive housing market.

"If they put some [new residency requirements] and we are not able to meet these requirements, we will be forced to leave," Palumbo said in a Skype interview. "After all the sacrifice we did to come here and realize our dreams."

Back in April, a spokesperson for Leave.EU dismissed the concerns of people like Palumbo and said that multi-national relationships were still protected by the conventions of international relations. "Absolutely nothing will happen to couples after Brexit," he told The Independent. "Their rights are guaranteed by the Vienna Convention."

Yet even if they are both granted the right to stay, as a finance expert Palumbo worries what new laws will mean for his ability to buy a home and raise a family.

"We are really worried...we don't know [how the Brexit will affect mortgages for non-British citizens] but we fear this. We will have to move out and start again," Palumbo said. "If we don't have the right to stay here, we lose everything."

Palumbo is also concerned about the general atmosphere of the U.K., which he says has turned hostile and "more aggressive" towards non-British nationals after the vote. He worries about how the nationalist sentiment will impact EU citizens, both socially and professionally.

"Everything is so uncertain. [Brexit] is changing a lot of how British people behave with us Europeans," he said, describing how the British are celebrating this vote as a sort of "Independence Day."

Kovarsky agreed. The public pro-Brexit sentiment, she said, "feels like a slap in the face."