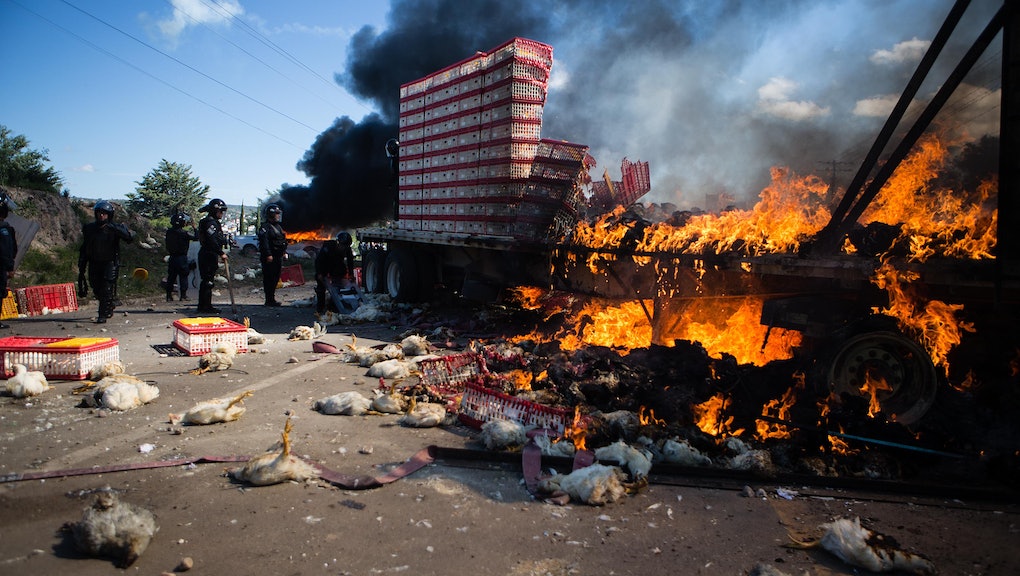 For the past several weeks, massive teachers' union protests have rocked the province of Oaxaca in southern Mexico, with members of the radical National Coordinator of Education Workers (CNTE) labor group erecting barricades and shutting down roadways across the region in protest of major planned federal education reforms.

According to Vice News, the protests had intensified after authorities arrested two local union leaders for money laundering. Both police and demonstrators insist the other side attacked first, although it is now no longer contested law enforcement agencies used live ammo on protesters.

This week, the State Department issued a warning to all U.S. citizens planning to travel to Oaxaca following the deaths.

According to Jacobin, the current protests stem from a prior movement in 2006 which was met with heavy federal repression. Supporters of President Enrique Peña Nieto's proposed reforms "invoke notions of 'accountability' and 'quality' instruction," the magazine wrote, "But the reform itself contains numerous measures aimed at undermining the power of teachers' unions including measures that weaken the union's control of the hiring process at normal schools (which they historically controlled), eliminate teachers' ability to pass down a position to their children, make it easier to fire teachers who miss work, and limit the number of union positions paid by the state."

The reforms would also implement state-administered centralized tests — including for teachers, who could be fired if they fail to perform, the Nation wrote.

On Wednesday, representatives from the union and the government met, but succeeded only in negotiating another meeting for Monday, the Yucatan Times reported. Interior Secretary Miguel Angel Osorio Chong released a statement saying the reforms would continue but he was open to negotiating on other issues.

Mexico News Daily reported protesters have continued to block roadways in Oaxaca and have expanded to Chiapas, with some blockades only letting privately-owned vehicles through or charging 50-100 pesos for entry.

According to Vice, as of Friday, the standoff continues with small odds of an immediate resolution, with the teachers maintaining about 30 roadblocks throughout Oaxaca. CNTE spokesperson David Estrada Baños told the site the movement was growing.

"There's much injustice in this country, and there are many people who join up with us because of it, people who don't agree with the government and join the struggle of the teachers," he said. "... I don't think, at this stage, anyone within the union is willing to give up the struggle, on the contrary. If anything, we'll march and block the highways with more resolve."