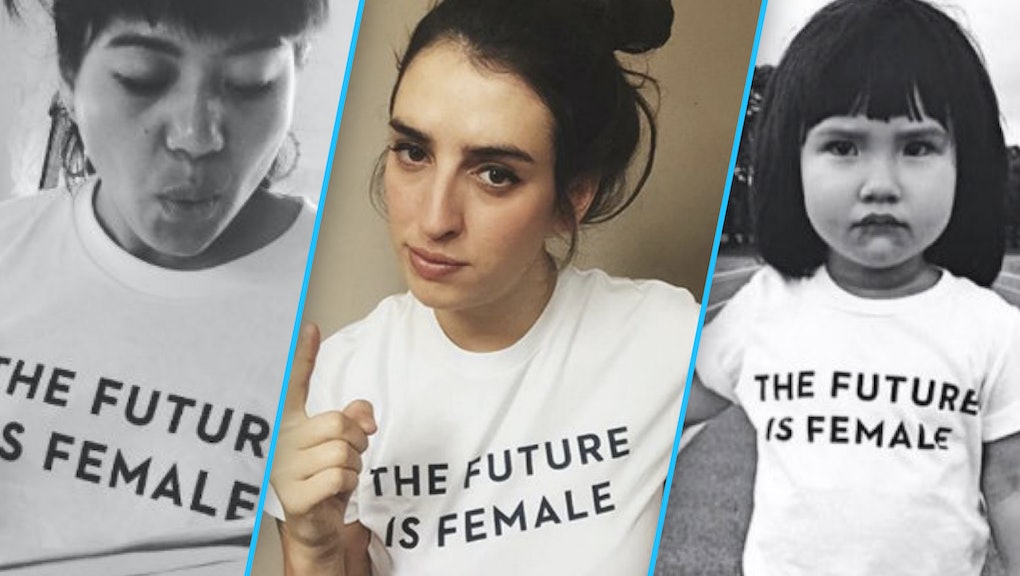 Otherwild is the kind of store where you can pick up a vase with breasts and undies with "Feminist" printed on the back; a "You Are Feminist Art" poster and both elixirs and crystals. It is also where someone can pick up and a T-shirt that reads "The Future Is Female," which has been worn by the likes of Lena Dunham, Gillian Anderson, Kim Gordon and Kiran Gandhi, the London runner who notoriously free-bled through a marathon.

For all of that, you can thank Rachel Berks, the owner of Otherwild who has effectively turned an artist and design space in Los Angeles into a feminist emporium online and in its expanded stores in Los Angeles and New York City.

What used to be a place where you could buy an eclectic assortment of pottery or check out local artisans is now also the go-to spot for people looking to make a feminist, queer-friendly statement by slipping into a T-shirt or buying a pin or hat that comes emblazoned with a call for equality.

"I think that people always thought that we had a unique perspective," Berks said in an interview. "There were a couple things we were doing different and I think it was about being unapologetically queer and unapologetically feminist. There's always been this connection to the art world. That's how Otherwild has managed to keep in fresh."

The first Otherwild store, which launched in 2012, was just a little bit more than 280 square feet and, according to Berks, was one of those places you didn't know about "unless you already knew about it."

Four years later, the store has found a massive following online. On Instagram, where the brand has 47,000 Instagram followers, many are quick to like archival pictures of Audre Lorde or a sneak peek at some of Otherwild's latest merch, whether it be a patch that reads "Come Out" or a hat with "Gay Power" stitched across the front.

The T-shirt that changed everything: How most people know Otherwild, or were first introduced to the brand, is because of that Future Is Female T-shirt.

Truth be told, the design found Berks last summer, when she saw a 1975 photograph by Liza Coward of Alix Dobkin. The photo was posted by Herstory, an Instagram account that posts old pictures of queer and lesbian women through time. (Since then, Otherwild and Herstory have teamed up for two special collections.) In the picture, Dobkin lazily leans on a building and shows off her white T-shirt, which has "The Future Is Female" printed across the front, the slogan of New York City's first women's bookstore, Labyris Books.

Berks reposted the picture of Dobkin onto her own Otherwild account, and saw a response not like anything she had seen before.

"It was such an overwhelming response to the image that I decided to make the shirt," Berks said. Later that day, she sent a design to her screen printer and made roughly 20 shirts. Soon afterward, they sold out, so she made more and reached out to Cowan. The shirt was starting to catch on.

"For me, I think it's nicely rooted in history, which is like one aspect of it, but then it also still resonates," Berks said. "'The Future Is Female' really is about looking towards a future where we don't have to have some of these conversations that we're always having, like a rapist is always getting off. Where Planned Parenthood is constantly under attack. Where women's rights and healthcare aren't a priority."

For Berks, the other aspect of the shirt's popularity is that it came at seemingly the most opportune time. Shortly after the shirt was first produced, Congress was voting on whether to defund Planned Parenthood. In response, Berks set it up so 25% of proceeds from sales of the shirt would be donated to Planned Parenthood, which only sparked more interest in the shirt and its ultimate message of a more hopeful, peaceful future for women.

"It's about more than wearing that slogan or more than wearing 'I'm a feminist' or whatever," Berks said. "It's about something that's actually empowering. Maybe it's empowering you to wear this statement across your chest but it's also tangibly helping other people by supporting Planned Parenthood. It's not just about wearing something that says 'feminist' on it. It's like, how does it actually function in the world?

A bump in the road: But then late last year, the inevitable struck. The shirt's popularity and ability to resonate faced a bit of a scandal in the form of a copycat. Model Cara Delevingne started selling nearly identical T-shirts with "The Future Is Female" across the front, and initially gave no credit to Otherwild.

"That was a major bummer," Berks said. "It was a major bummer because she got the shirt from me. St. Vincent, who she was dating, bought two sweatshirts from me and then [Cara] went out and made her own. I've never gotten more press in my life, and it wasn't the press that I want. It really felt like I didn't want to leave my bedroom for days but I stopped reading the articles."

Delevingne faced a barrage of negative press for ripping the design, especially since, unlike Otherwild's design, Delevingne's didn't donate to Planned Parenthood.

Making a safe space: However, months after that scandal, Berks says she's pretty over it, as Otherwild has only grown. In its New York City outpost, which opened in May, a rack of Future Is Female T-shirts, tote bags, sweatshirts and tank tops snuggles tightly in one corner, while handmade candles, tapestries and pottery stands on the other. There are cases of jewelry and posters hung on nearly every available wall. The floor is deep blue like the sea. It is neat little hideaway, which is no accident for Berks.

"I think [the idea of it as a safe space] has grown over time," Berks said. "It's definitely become more of a focus and priority all the time. I don't know if it was what my [former business] partner and myself set out to do originally but as time as passed, two things became really clear to me: that that was a very important component and that I didn't ever just want to have a store. I wanted it to be a very active space. You can sometimes catch a performance or a comedy show or take a class or a variety of things."

At the store in Los Angeles, customers can attend tarot readings or art classes. Artists come in to talk and young, queer people come in to hang. In that sense, the physical space, and even its presence online, feels like a safe space for queer-identifying people and/or nonbinary people and/or people who identify as women.

"I hope to appeal to lots of different people, but I think that to a young, queer person, we're an exciting store," Berks said. "Nobody else is speaking to certain interests or desires that they might have."

And those certain desires could mean wanting to buy a boob charm necklace or a pin that reads "dyke" or white socks with the film titles "Single White Female" and "She Devil" stitched into the top.

"When you do something like this, you realize how many other people are out there searching for community like that," Berks said. "And so you think you have this one community, however large or small. I feel like five minutes I had 2,000 followers. I really feel like that happened so fast. As people start to hear about you, you realize a lot of people are looking for what you're offering."

For Berks and Otherwild, that couldn't be more true.