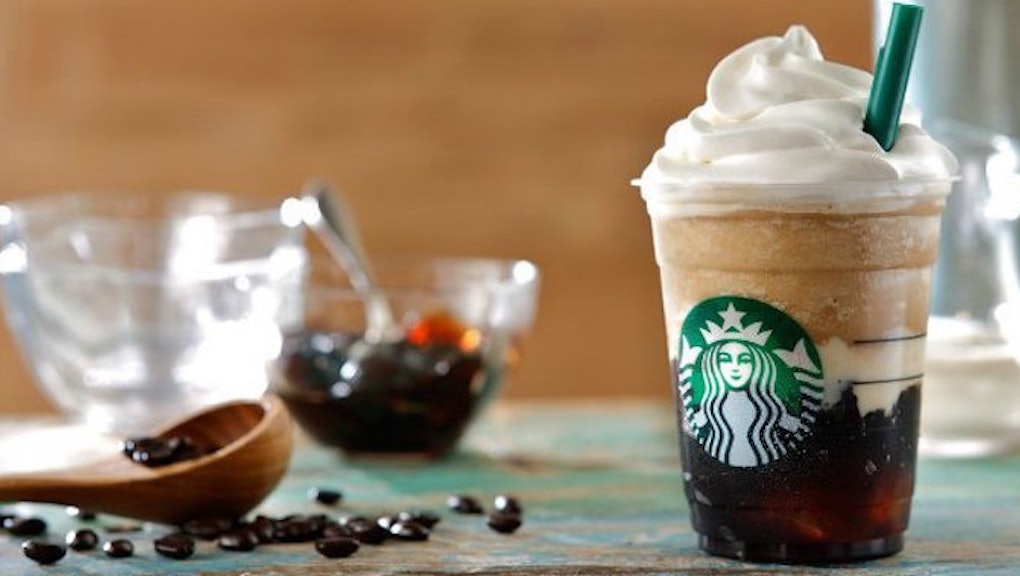 Why does Japan get to have all the Starbucks fun? First they get boozy Frappuccinos, and now the latest summer Frappuccino flavor stars coffee jelly, Rocket News 24 reported.

Coffee jelly is a popular Japanese dessert which is made from coffee and gelatin, according to Japanese Cooking 101. The dish, which isn't overly sweet, is believed to have originated at a Japanese coffee chain in the 1960s, according to its description on JC101, and is now a popular ingredient at bubble tea shops around the world.

Starbucks' coffee jelly is made from the chain's roast espresso blend and serves at the bottom layer of the Frappuccino. The jelly gets topped with a "creamy custard vanilla sauce," a layer of blended coffee and a thick pile of whipped cream,  Rocked News 24 wrote. The drink comes with with an extra-wide straw — similar to those found in bubble tea stores — so that customers can suck up the coffee jelly without anything getting stuck.

Coffee jelly has appeared on Starbucks Japan's menu before. A limited edition Frappuccino featuring the item was first introduced in 2008 and was popular enough that it was subsequently brought back to the drinks line-up a number of times over the years. The layered version, with the custard vanilla sauce, appears to be the newest iteration of the blended beverage.

For those drooling, there's good news: Japan isn't the only country that gets a coffee jelly Frappuccino. Customers in the U.K. will be able to slurp down Caramel Coffee Jelly Frappuccinos this summer to ease their Brexit woes, Cosmopolitan U.K. reported.

If it's any consolation, Americans are the only ones that get to knock back Starbucks' new nitro cold brew.