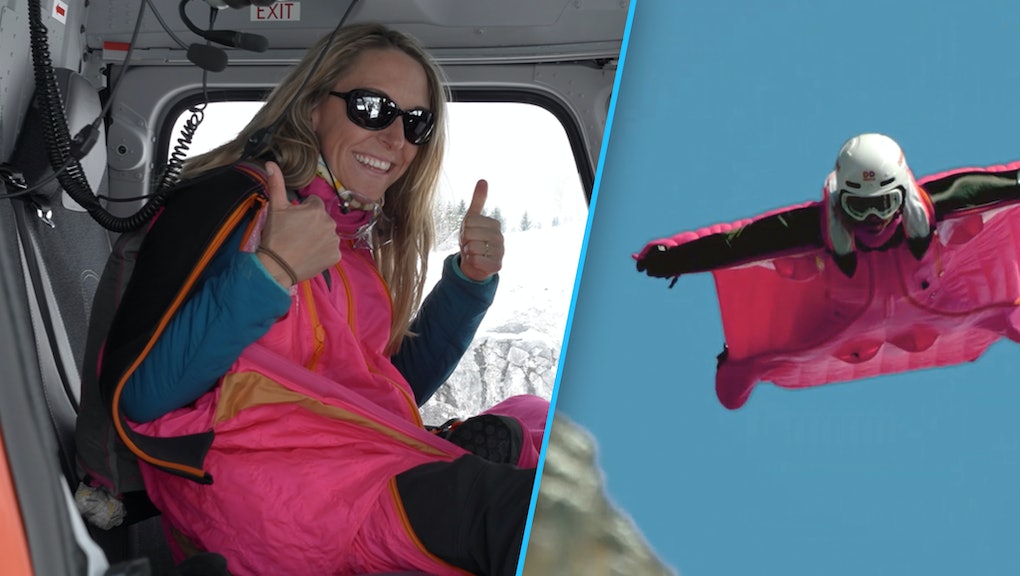 This Woman Jumps Off Cliffs at 120 Miles Per Hour. Here's What She Eats to Avoid Barfing.

Heck, cheetahs, the fastest land animals, can only gallop along at a mere 68 to 75 miles per hour.

For Ellen Brennan, internationally-renowned BASE jumper, 120 miles per hour is the speed at which she hurtles toward the earth during a jump from an insanely high rock face.

A more dangerous variation of skydiving, BASE jumping is a fringe sport where adventurous souls (people who are out of their minds?) jump off fixed structures or cliffs. (BASE stands for building, antenna, span and earth, or objects from which one can jump.) Participants wear flying squirrel-like wing suits that have a quick-deploying parachute.

CNN estimated that around one in 10 BASE jumpers will lose their lives during a jump. The sport of BASE jumping is legal, but it's prohibited in some areas of the U.S., like New York City and some national parks, Esquire reported.

One in 10 BASE jumpers will lose their lives during a jump.

Feeling queasy yet? This doesn't hold a candle to that time you almost puked on a carnival rollercoaster.

Brennan has been a pioneer for BASE jumping. CNN reported that she moved from the U.S. to France in 2009 to learn French in order to eventually become a nurse in western Africa, but she gave it up after falling in love with gliding bird-like through Chamonix, an area near the border of France and Switzerland. She holds the title of "fastest flying woman on earth." Pretty badass, no?

"You have to learn to focus on just your body — to see only the things you need to see — otherwise it is too much," Brennan told CNN in 2014.

Leaping off a cliff that stands 8,346 feet tall in Chamonix, France, Brennan recently grabbed a bag of Dunkin' Donuts mid-flight, the first time a BASE jumper has successfully grabbed anything mid-flight, a Dunkin' Donuts marketer told Adweek. Check out a gut-wrenching GIF of the jump below, or check out the full jump video here.

Did your stomach just heave uncontrollably? Yeah, ours too.

All this makes a person wonder... what in the actual fuck does a BASE jumper eat before launching themselves into the air?

Brennan told Mic in an email what she eats (and drinks) to prep for an epic BASE jump. [Her responses have been edited and condensed.]

What Ellen Brennan Eats Before and After BASE Jumping

I know quite a few people, however, who have learned the hard way that a big Mexican meal the night before never turns out well when you're jumping.

On getting caffeinated: I usually wake up two hours before I have to leave the house. This gives me plenty of time to drink my coffee, catch up on the news, make sure my gear bag is packed, and do one last weather check before I head out.

On breakfast: I like to have something light but with lots of energy.  My easy, go-to meal is a banana with some peanut butter before I leave the house.

On staying hydrated: If you are not well hydrated, you risk getting muscle cramps while flying. This can have a significant impact on flight performance.

On a typical three-hour hike [to the summit where I jump], I will drink between one to one-and-a-half liters of water. I have to pace myself so I don't get to the top with an empty water bottle. I watch the time very closely and make sure to drink two to three sips of water every 15 minutes.

On hiking snacks: I will snack on nuts to keep me fueled [while hiking to the summit.]

While hiking, I don't like to listen to music. Instead, I listen to the wind and animals to get a sense of the conditions I will experience during my flight down.

On her final summit snack: Once I arrive at the top I give myself at least 15 minutes to relax and eat a final snack before I gear up ... I will usually eat something like an apple to give me a little sugar boost before flying down.

On her celebratory post-jump meal: One of my favorite aspects of jumping is the celebratory meal when you land. My typical go-to meal is a hamburger with a side salad.

On the joys of European shandy: Along with my burger, I will almost always order a Panaché. This is a classic European drink made with half beer and half Sprite. I know it sounds disgusting, but it is incredibly refreshing on a hot summer day.