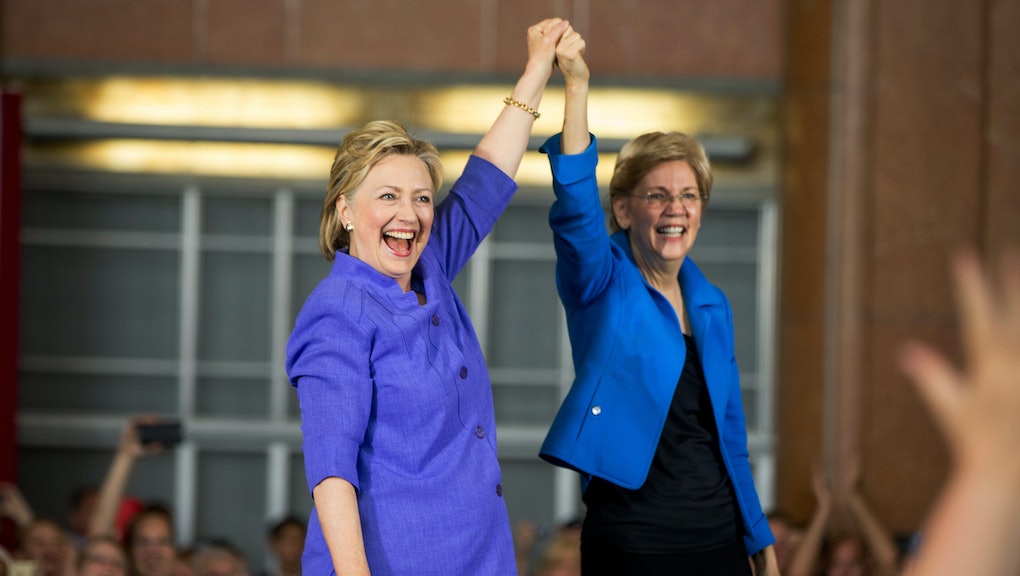 Sen. Elizabeth Warren appeared to pass her first test in the Hillary Clinton veepstakes, delivering a fiery speech at a joint campaign appearance with the presumptive Democratic nominee in Cincinnati, Ohio, in which she praised Clinton as well as tore into Donald Trump.

Any previous consternation between Clinton and Warren was nowhere to be found at the appearance, where the Massachusetts senator and progressive icon was effusive in her admiration for Clinton, and declared "I'm with her."

Warren also went on to attack Trump, turning his "goofy Warren" nickname against him, saying, "You want to see goofy? Look at him in that hat."

Clinton's campaign has confirmed Warren is on the vice presidential shortlist. Democrats say Warren's star has risen in the veepstakes, as Clinton tries to woo reluctant supporters of Sen. Bernie Sanders to her side. And she's solidified her status on the shortlist with her comfort in being an attack dog against Trump, whose scorched-earth campaign style gives some Democrats heartburn.

On Monday, she painted Trump as a "thin-skinned bully driven by greed and hate."

"Donald Trump cheered on Britain's current crisis — which has sucked billions of dollars out of your retirement accounts because, he said, 'Hey, it might bring more rich people to his new golf course,'" Warren said. "He cheered on the 2008 housing crash because he could scoop up more real estate on the cheap. And he cheered on students, desperate enough to sign up for his fake university, so he could bleed them dry and turn a profit for himself."

Clinton, wearing a matching blue pantsuit, stood alongside Warren and smiled as she watched one of the members of her vice presidential shortlist attack the presumptive Republican nominee.

"Now, you just saw why she is considered so terrific, so formidable, because she tells it like it is," Clinton said.