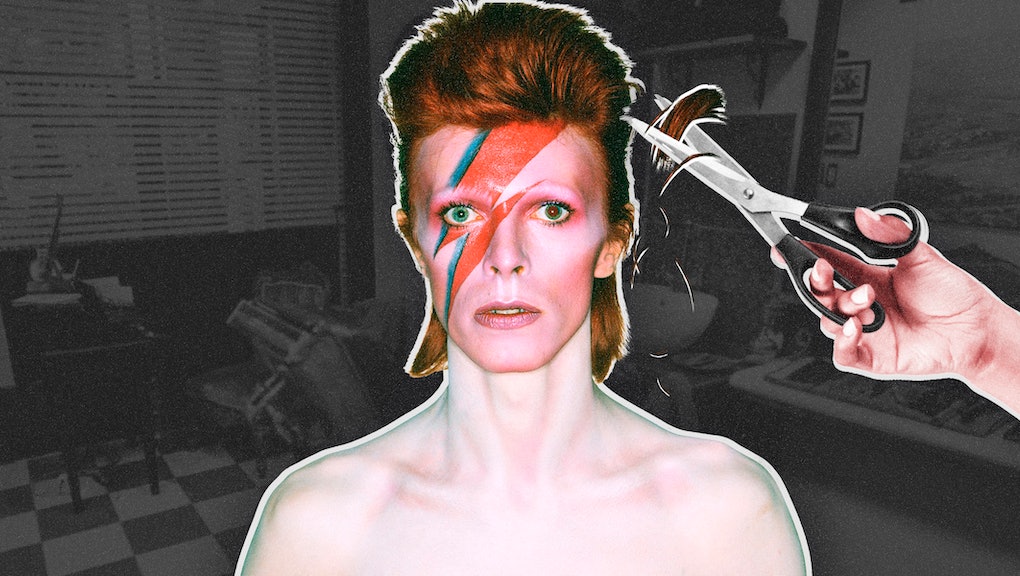 Inside the Dark, Weird and Surprisingly Expensive World of Selling Dead Celebrity Hair

Last week, less than six months after David Bowie died, a lock of his hair went up for sale.

It had been trimmed from Bowie's head back in his Let's Dance era, and taken by a wigmaker when Bowie was to be immortalized in wax by Madame Tussauds museum in London.

In a letter to Heritage Auctions, the woman who was auctioning off the strands, Wendy Farrier, wrote, "The head of the Tussauds studio during my employment was a talented sculptor called Ian Hanson, and my head of department was the innovative wigmaker Ray Marston. They both knew I was a Bowie fan and kindly let me take the hair samples when he came for a sitting in 1983." Now, six months after his death, Farrier was ready to let the pale blonde strands of hair, tied in a blue ribbon, go.

The business of buying and selling a dead celebrities' hair is, to put it lightly, massive, preceding not just eBay, but the internet as a whole.

So, the question you may be asking now is: Why? Why hair?

According to Adrian Roose at JustCollecting.com, an online community for collectors where they can buy, sell, upload and manage their collections, buying celebrity hair now is just an extension of a long, weird history dating back to the 19th century.

"[It] actually dates back to Victorian times when it was seen as the norm, the equivalent of collecting autographs today," Roose said in an interview. "Harry Rubenstein, a curator at the Smithsonian National Museum of American History says 'more so than an autograph, it was a sign of affection.'"

But other than proving paternity, it is, by and large, one of the most personal things you can have from someone you love, or admire from afar. It's like buying Michael Jackson's white glove (which sold for $20,000), or Prince's coat from Purple Rain, but far more compact, personal and niche. The auction world's not-so-secret, hugely profitable dark underbelly.

Babe Ruth's hair, for instance, went for $38,000. Some hair from Lord Nelson, a British officer known for his actions during the Napoleonic Wars, went for $44,000. Currently on sale on Paul Fraser Collectibles, an online epicenter of auction items, there's hair from Elizabeth Taylor and Geronimo, right beside Hans Christen Anderson and Katharine Hepburn. It's hair from literature's largest figures beside Hollywood's most fabulous beside politics' most powerful.

And because of the internet, the hair of dead people is more accessible than ever before. Previously, people had to have physically gone to an auction, or communicate directly with a dealer. Now, you can pick up a few strands of Marilyn Monroe's hair from the comfort of your couch for just a few hundred dollars.

"Who's buying it? Collectors. People with a passion for their subject," Roose said. So it's not as though rabid fans are buying this hair and putting it under their pillow every night, in hopes of reincarnation. They're just adding one more piece to their collection.

Currently, the largest collection of celebrity hair is indeed over at Paul Fraser Collectibles, which currently has strands of hair from Elvis ($529), John Lennon ($529), Marilyn Monroe ($529) and Neil Armstrong ($529) all for sale.

Of course, though, people aren't only interested in buying this hair because they know people have been collecting hair for centuries. They're interested in it because, according to Roose, it gives them a "very personal link to the person involved."

"[Paul Fraser Collectibles] sells half inch strands on a presentation card, the majority of our customers have the item framed for display," Roose said. "It's certainly a good opening conversation at a dinner party."

And judging by the breadth of celebrity hair online, there really could be a collector for everyone.

And now, it's not even just dead celebrity hair that's bringing in the biggest bucks. It's the celebrities that are alive and kicking too. Most recently, Frasier Collectibles purchased Justin Bieber's hair directly from the charity that was selling it, and the funds (which was more than $44,000) went towards building a new school.

Although getting surgery or buying loads of a favorite celebrity's products is far more socially acceptable than hanging some hair on your wall today, the practice boils down to the same thing: Affection.

Buying hair is just a little bit creepier — and a lot more interesting.