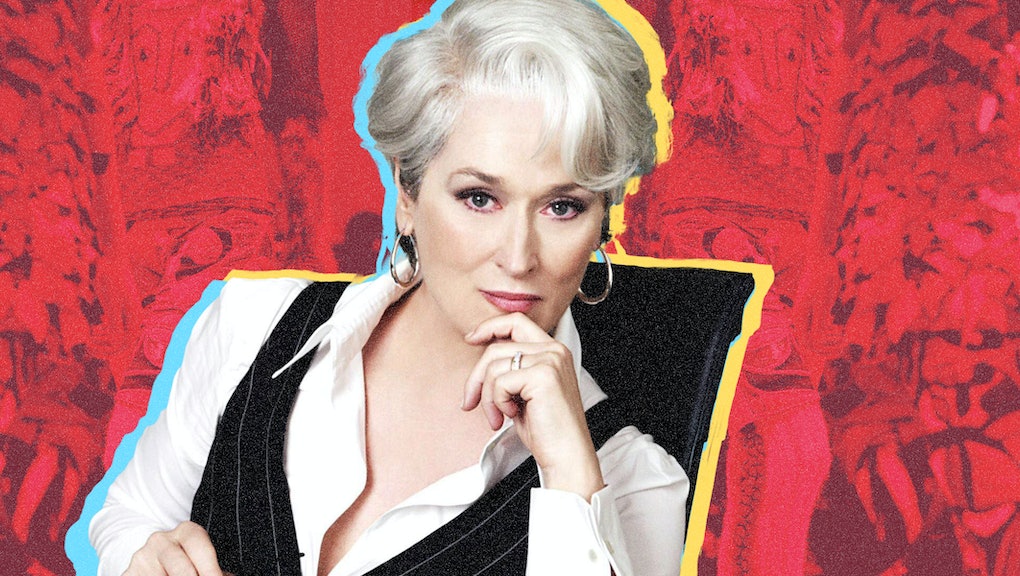 How, In One Monologue, 'The Devil Wears Prada' Nailed the Cultural Appropriation Issue

Ten years ago today, movie viewers were treated to one of the most iconic monologues in film history.

As ticket holders sat down to watch The Devil Wears Prada when it premiered on June 30, 2006, they might have expected that there'd be lots of clothes. They might have expected that Meryl Streep would steal the show. (And they were right about both of those things.) But what they probably didn't expect is that in a single monologue, Streep would be able to succinctly tell you why fashion isn't a joke — and also nail the real issue with cultural appropriation.

"OK, I see. You think this has nothing to do with you," she says, sounding exhausted. "You go to your closet and you select that lumpy, loose sweater, for instance, because you're trying to tell the world that you take yourself too seriously to care about what you put on your back, but what you don't know is that that sweater is not just blue. It's not turquoise. It's not lapis. It's actually cerulean."

She continues: "And you're also blithely unaware of the fact that in 2002, Oscar de la Renta did a collection of cerulean gowns, and then I think it was Yves Saint Laurent who showed cerulean military jackets, and then cerulean quickly shot up in the collections of eight different designers. And then it filtered down through department stores, and then trickled on down onto some tragic Casual Corner where you no doubt fished it out of some clearance bin. However, that blue represents millions of dollars and countless jobs, and it's sort of comical how you think you made a choice that exempts you from the fashion industry when, in fact, you're wearing a sweater that was selected for you by the people in this room from a pile of stuff."

Her point? Before you try to immerse yourself in an industry or culture, or mock it while appearing to embrace it (like Andy), learn the history. Because, after all, in fashion, a blue sweater is not just a blue sweater, but the result of many different people working very hard to give you something exciting. Every garment has a story.

Have a little respect.

Ten years later, people still have to give explanatory, long-winded monologues about respect, but it has nothing to do with sweaters or defending the fashion industry. In many ways, Priestly's monologue nailed the real problem with cultural appropriation: people not understanding the history or meaning behind something like cornrows or headdresses, but treating it like a new trend or accessory anyway — like buying a "rain stick" from Free People for a music festival as a joke, and not thinking about what that rain stick really means.

Today, people like the Kardashians are channeling Andy in this scene whenever they try to wear something like a feather headdress. And who is Miranda Priestly? Well, the internet and anyone who actually understands the meaning behind that headdress, of course. (Alternatively, Priestly could be played by Amandla Stenberg, who has gone on the record before on the dangers of Kardashian cultural appropriation.)

That's something that Ira Madison III, a senior pop culture writer at MTV News, noticed last month. Upon viewing the film again on Bravo in May (he had seen it in theaters when it opened and again several times after that), he tweeted the following: "Every black person who's ever had to explain something to a white person deeply connects with Miranda Priestly's cerulean monologue."

"I've always loved Meryl Streep's character and there's been so many posts all over the internet about how she's the real hero," Madison said in an interview. "The movie has you believe that Anne Hathaway is your way into this world, but at a certain point, you're just sort of like, 'Girl, get it together.' Once Meryl dresses her down, a lightbulb goes off, and it's like 'This is the bitch I wanna follow.'"

To Madison, Streep's monologue was the lightbulb. What Priestley is doing in that scene, essentially, is exposing how dismissive and unknowledgeable Andy is of the culture she's taking part in — a culture that she previously viewed as frivolous.

And what do we call it when people are dismissive and unknowing of a culture they're taking from today? Oh, that's right: cultural appropriation, which happens to coincide with the presence of white privilege.

For Madison, the most recent incident in which he had to channel Priestly and explain to a white person what their garments really mean was during Coachella.

"For an example, you could use the jokes they wear at Coachella," Madison, who lives in Los Angeles, said. "I've seen people at parties with Indian headdresses or African dashikis and they're like 'Oh, they're just comfortable.' And it's fine and it's one piece but people go through that it's performative. They're like 'let me just wear the beads, it's party fashion.'"

It's also ignoring an entire, elaborate cultural history, much like Andy was ignoring the elaborate history of the fashion industry.

"It's just a hairstyle, you're allowed to wear it," Madison affirmed. "It's the idea that you came up with it on your own and not acknowledging the fact that other people created this hairstyle and it wasn't your original idea to embrace this culture. It's because of the work done by other people that you're wearing this."

Kylie Jenner, for instance, claimed that she "started wigs," and Kim Kardashian West banked on launching "boxer braids," which are actually cornrows. They, like Andy, probably don't fully understand the work and culture of the people (i.e. black and Native American people) who enabled them to wear those headdresses and wigs.

So, despite being 10 years old, Miranda Priestly's monologue lives on in the hearts of anyone waiting to take down the idea that a culture can be worn like an accessory, or that a blue sweater is just a blue sweater.