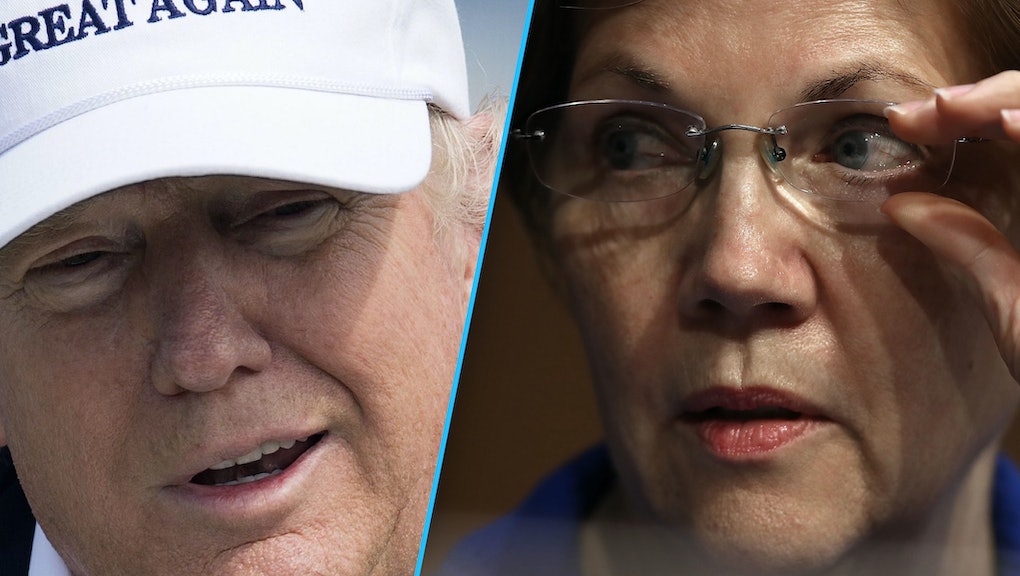 Donald Trump Just Doubled Down on Elizabeth Warren: "We Call Her Pocahontas for a Reason"

"We call her Pocahontas for a reason. She said she's 5% Native American," Trump said in an interview with NBC's Hallie Jackson. "She was unable to prove it. She used the fact that she was Native American to advance her career. Elizabeth Warren is a total fraud."

"She made up her heritage, which I think is racist. I think she's a racist, actually because what she did was very racist."

In 2012, Warren repeatedly cited her Cherokee heritage as part of her "family stories," and in the past, reported the Atlantic "was touted as a Native American faculty member while tenured at Harvard Law School in the mid-1990s." However, the outlet also reported Warren "would not be eligible to become a member of any of the three federally recognized Cherokee tribes based on the evidence so far surfaced by independent genealogists about her ancestry."

According to Indian Country Today, genealogist Christopher Child has turned up corroborating documents from 1894 saying Warren's great-great-grandmother, O.C. Sarah Smith, is Cherokee, Indian Country reported. But some right-wing pundits such as Breitbart contributor Michael Patrick Leahy have pressed the issue as evidence Warren is a liar, contesting the authenticity of the documentation.

"An Indian identity is something someone claims for oneself; it is a matter of choice. It is not legally defined and entails no legal benefits," wrote the Washington Post. "Being an enrolled member of a federally recognized tribe, however, is a legal status that has nothing to do with identity and everything to do with blood quantum."

The paper noted Warren "doesn't claim an Indian identity, just Indian ancestry," since she has not applied for membership in any tribes.

While it's not surprising Trump has latched on to Warren's heritage as a line of attack, given his long history of using racist language to taunt his opponents, it's not clear that the use of "Pocahontas" as an ethnic slur will affect his chances. A recent Washington Post/ABC News poll found the real estate billionaire has slipped up to 12 points behind Clinton, while just 28% think Trump has a "better personality and temperament" than his opponent.