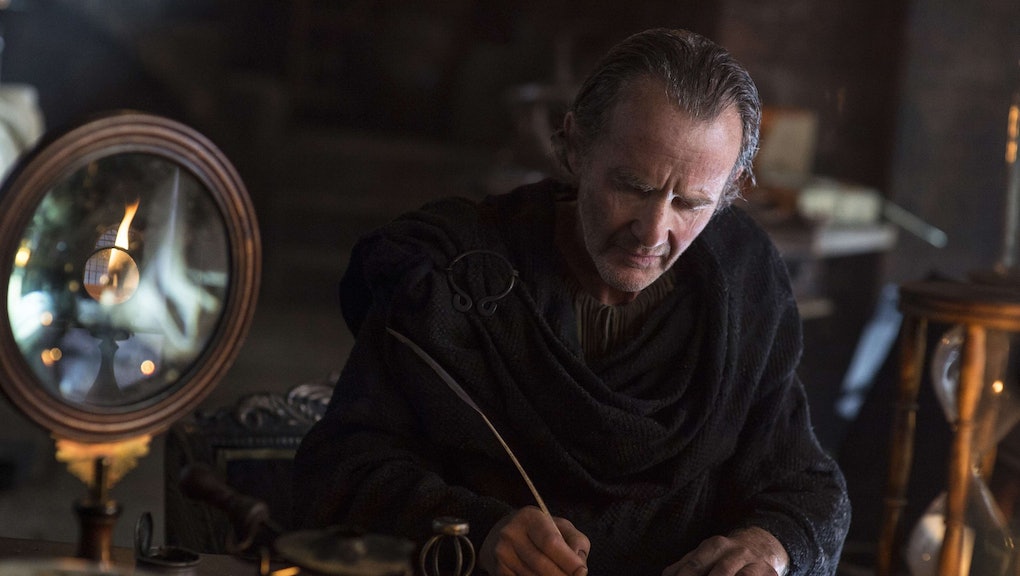 (Editor's note: This post is dark and full of spoilers from Game of Thrones season six.)

Much attention has been paid — and rightly so — to the strong female characters who dominated Game of Thrones season six.

But one male character who truly came into his own this season deserves a mention as well: Qyburn, the unsavory ex-maester who cloaks his deceit and back-stabbing with smiles and sweets. Through a combination of Machiavellian intrigue, terror and naked force, Qyburn has wormed his way to the top of Westeros' hierarchy. Here's three reasons the mad scientist has become a force to reckon with in the world of ice and fire:

Cruel, horrifying and unethical as his methods may be — Grand Maester Pycelle warns Cersei of the "arrogance that had [Qyburn] expelled from the Citadel," and in the books it is established that Qyburn's crimes include vivisecting the living to learn the secrets of death — Qyburn gets results.

During Ser Gregor Clegane's trial by battle with Oberyn Martell, the massive knight was pierced with a lance full of manticore venom — one of the strongest poisons known in the Game of Thrones world. Using some incredible medical knowledge known only to himself, and possibly a smattering of dark magics, Qyburn has pulled off one of two things: Either he prevented Gregor's death entirely, or more ominously, resurrected the giant's body as a some form of undying monstrosity.

Either feat would arguably establish Qyburn as one of the greatest medical and scientific innovators in Westerosi history, and perhaps the world. He has conquered death.

What the red priests can only accomplish with magic, the maester has accomplished using only his mind. Moreover, the lumbering beast he created has already proven invaluable to Cersei's plans, and we've barely even seen the knife's edge of his capabilities in combat yet.

Qyburn, having just taken control of Lord Varys' network of "little birds," was instrumental in the success of Cersei's fiery coup. Not only did he verify rumors of the wildfire stockpiles beneath the Great Sept of Baelor in the season six episode "No One," his subterfuge was doubtless the key factor in actually enabling the plot to succeed, from preparing the trap to luring Lancel Lannister to his cruel demise beneath the sept.

In one fell stroke, the wildfires consumed every noble of note in King's Landing, all leaders of the sparrows, and the queen Cersei hated — not to mention King Tommen, a death by suicide they did not anticipate but nonetheless resulted in the queen mother's ultimate power move.

Without Qyburn, Cersei would have been powerless to pull her massive murder scheme off. Technically, the bombing probably qualifies as the Game of Thrones world's first terrorist attack.

That leads into the third point, which is that...

When we first saw Qyburn in season three, the disgraced ex-maester was the sole survivor of a massacre of prisoners at Harrenhal, seemingly stunned at his "lucky" survival of the mass slaying. It was hardly an auspicious place to find himself.

Seasons later, and Qyburn has not only become the most trusted adviser to the newly crowned Queen Cersei, but seemingly earned the title of hand of the king, judging from the pin he wears at Cersei's coronation ceremony.

Qyburn's murder of Pycelle eliminated the opposition of that order to his new queen's power, as well as cemented his de facto position as both master of whisperers and acting grand maester. Furthermore, it would appear from the reanimated Clegane's position at the side of Cersei that his creation has usurped the position of lord commander of the Kingsguard. Other positions on the Small Council, such as master of laws, master of ships and master of coin, have all sat vacant or were eliminated through the wildfire plot.

Cersei's new autocracy thus depends squarely on the machinations and counsel of Qyburn, who has perhaps become the most important member of her new order. That stunning rise to power from commoner to kingmaker is unrivaled in the show — Jon Snow, Daenerys Targaryen and Petyr Baelish may have all had relatively humble origins, but they could all claim a degree of royal heritage which enabled their ascent within Westeros' political and economic spheres.

Unfortunately for Qyburn, his astonishing transformation into one of the most powerful men in Westeros may soon be accompanied by a dazzling fall as Cersei faces the threat of a joint Targaryen-Tyrell-Dornish rebellion, the advance of Euron Greyjoy's reavers on the continent's west coast and an Iron Bank which is sure to demand its due. Only the final two seasons will tell.