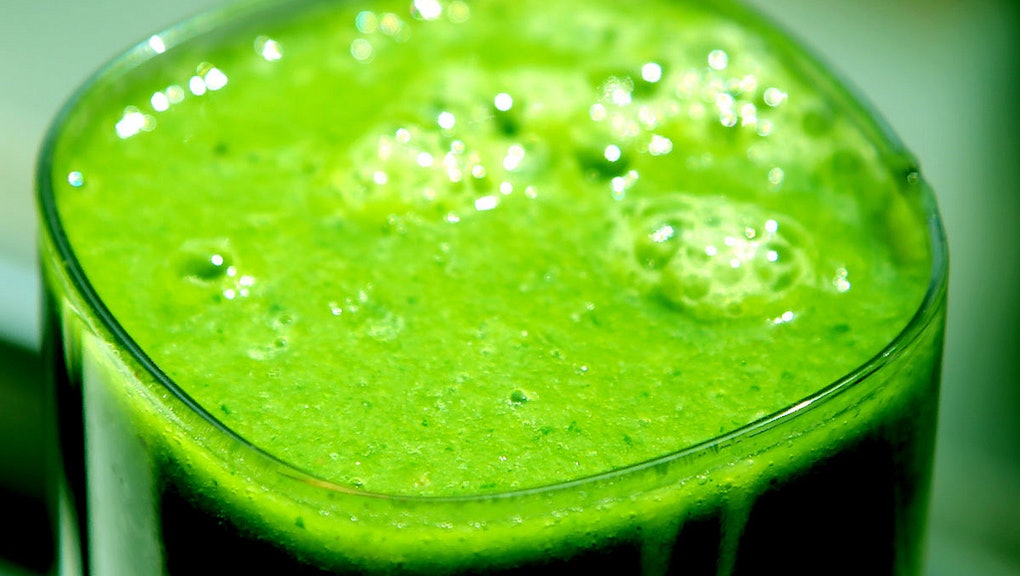 Despite the fact that the cold-pressed juice market is thriving — estimated at $100 million per year, the Los Angeles Times reported in 2015 — experts agree that suckling the liquid from full pieces of produce isn't the best way for a person to get their nutrients.

But for those who are time-pressed, stressed or just don't have the desire to delicately chop a salad or wash and chew some fruit, the idea of slurping down a helping of fresh produce in juice or smoothie form may seem mighty attractive. Some say it's not the worst alternative.

"[M]ost of us are not eating enough fruits and vegetables," Barbara Rolls, a nutrition professor at Pennsylvania State University, told the Washington Post in 2014, "so if [smoothies are] encouraging people to eat more fruits and vegetables, they're keeping the other ingredients pretty healthy and they're finding them satisfying, I think that could be a good thing."

So if you're working on getting your five to nine servings of fruits and veggies a day, a smoothie or juice can be a healthful option to help you get there (but certainly shouldn't completely replace whole foods). If you're yo-yoing between the two options, go for the smoothie.

"I like smoothies more than juices because you get fiber," registered dietitian Rebecca Scritchfield, said in an email. "[W]ith juices, all the fiber is removed. When you have sugar and no fiber, your blood sugars spike because you don't have fiber (or other nutrients like protein) to slow down the blood sugar response."

Here are 8 reasons why smoothies > juices.

All the pulp that's removed from a piece of produce to make juice contains dietary fiber, a part of fruits and vegetables that the body can't digest. Fiber can help moderate your poops, lower your cholesterol and keep you full, according to the Mayo Clinic. Smoothies keep the fiber intact.

2. Juices set off a blood sugar spike, but smoothies won't.

The fiber in whole fruits and veggies slows the body's absorption of fructose, the main source of sugar in most fruits, the New York Times reported. "[F]iber-rich fruit breaks down more slowly so it travels far longer through the digestive tract, triggering the satiety hormones that tend to cluster further down the small intestines."

3. Juicing doesn't make the most of all of a fruit's benefits.

Juicing oftentimes neglects to include a fruit's skin in a beverage — another lost opportunity. Fruit skins contain phytonutrients like carotenoids and flavonoids, which have been found to support longevity and reduce the risk for some cancers, the website World's Healthiest Foods stated. Don't you want to know the colorful beverage you're sipping on is literally giving you life?

4. Juices are more expensive to make than smoothies.

The volume of a smoothie will be greater than the volume of a juice when using the same ingredients. As registered dietician Melissa Montalto calculated for a blog post for the University of Washington, "2 oranges, 1 stem of kale, ½ red pepper, 1 cup berries and 1 stalk broccoli will make about 1 cup of juice but about 3 cups of smoothie." You'll have to buy more produce to make a juice equal in volume to a smoothie.

5. Juice can waste close to 5 pounds of produce, while smoothies leave almost nothing behind.

While a smoothie uses virtually all of the ingredients in their entirety, juices leave the produce's fibrous pulp behind, which can amount to up to 4 1/2 pounds of leftover pulp per juice, depending on serving size and ingredients, according to Modern Farmer. Some establishments will compost this pulp, but oftentimes the waste is dumped into landfills, where it will give off methane, a greenhouse gas with potential to contribute to global warming, according to a September post on the Environmental Protection Agency blog.

Some innovators have transformed juice leftovers into snacks (like these organic vegetable chips), but that's one extra step that requires will and resources. Nearly everything gets eaten (or slurped) when produce is made into a smoothie.

One-third of the world's food produced for human consumption is lost or wasted every single year, according to the Rockefeller Foundation. Juices contribute to this waste; smoothies do not.

6. Juicers are one-trick ponies while blenders beg to be experimented with.

7. Juicing is more time-consuming than blending.

Because smoothies call for use of the whole fruit or vegetable, you can plop the ingredients straight into the blender (though bigger items may need to be quartered or halved). Before juicing, frozen fruit must be thawed (but add an iciness to smoothies) and certain items must be sliced to fit in the mouth of the juicer, which tends to have less surface area than that of a blender.

8. Cleaning a juicer is even more annoying than cleaning a blender.

All that slicing and dicing calls for washing and rinsing of the cutting boards and utensils you've used. Plus, you'll have to clean out the pulp that amasses in the juicer. Neither are necessarily fun to clean, but at least you can clean out everything inside the blender by easting it.