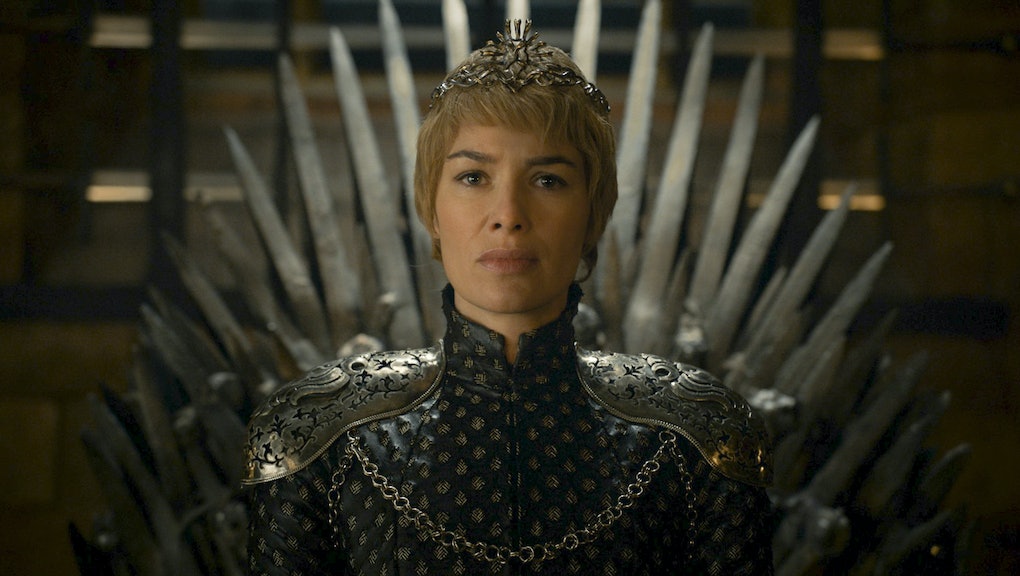 Game of Thrones' season six finale was an incredible feat on all narrative and technical fronts. Jon Snow's true parentage was finally revealed; Cersei Lannister's revenge on the High Sparrow exploded into action; we lost another king of the Realm in the aftermath; and the score was universally praised. Most impressive of all, however, was Cersei's newly unveiled black dress.

The new queen of the Seven Kingdoms went away with her typical red and gold outfit — true to House Lannister's colors — for the black ensemble with silver shoulder pads. The best part? It was presumed she was getting dressed for her trial at the Sept of Baelor, as the finale begins with shots of several characters donning their outfits to attend the trials of Cersei and Loras Tyrell.

Instead, she stayed at the Red Keep — watching the explosion from a distance with a chalice of wine by her side. Essentially, she wore the outfit to bask in the glory of her fiery victory.

While it was an impressive victory, the unfortunate aftermath of her actions caused King Tommen Baratheon to jump out of his balcony window and kill himself after losing his wife, Queen Margaery Tyrell, in the explosion. It certainly wasn't planned — Cersei intentionally made sure Tommen wasn't at the Sept when it blew it — but as a result she sits on the Iron Throne (and yes, she was still wearing the dress during her coronation).

While the season has ended, fans aren't ready to let go of Cersei's dress. There's already a Cersei Reddit thread for black dress appreciation purposes, and fans on the Twitterverse were similarly in awe of the new, fierce ensemble.

Cersei's reign might be short-lived, what with Daenerys Targaryen and her dragons finally sailing to Westeros, but her outfit is the latest dress to break the internet.