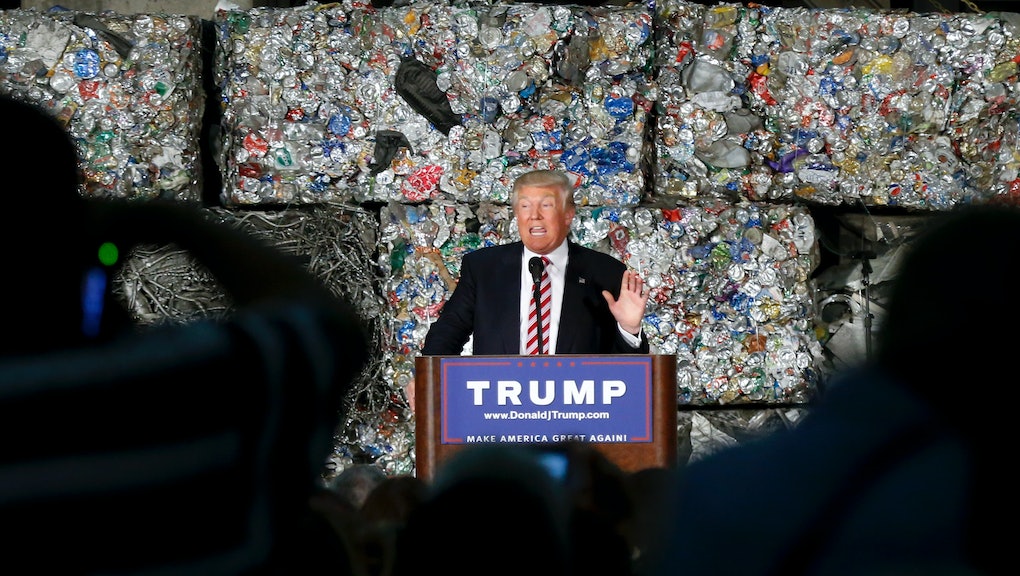 But as Trump talked trade deficits and manufacturing policy, viewers had difficulty focusing on much besides the setting of the speech. Gone was the gold-plated backdrop of Trump Tower in Manhattan. Instead, Trump opted to speak in front of giant heaps of recycled metal.

Trump may have hoped the scene would conjure images of a manufacturing revival, but to many viewers, the optics were just, err, garbage.

Meanwhile, here's what he said: Hoping to overcome an early polling deficit against Clinton by riding a wave of white working class support to the White House, Trump's choice of location was no accident.

Polls suggest that Trump's populist message on trade and manufacturing could make him competitive in the region. According to RealClearPolitics, he trails Clinton by just 2.5 points in Pennsylvania and three points in Ohio, while the most recent poll of Michigan voters showed him down just four points there.

Trump's message to voters in the region: I'm the turnaround artist you need.

"The era of economic surrender will finally be over. ... We will have four, maybe eight, great, great, productive years," Trump promised, vowing to withdraw the U.S. from ongoing talks over the TPP, label China a currency manipulator and renegotiate NAFTA — or withdraw from the agreement if Mexican and Canadian leaders didn't agree to satisfactory terms.

"A new era of America prosperity will finally begin," Trump said. "America will be independent once more. Doesn't that sound great?"

With mounting populist anger around the globe — exemplified by U.K. voters' decision last week to withdraw from the European Union — Clinton has calculated that her best bet of staving off Trump is by convincing voters he doesn't actually aim to "make America wealthy again," as he promised Tuesday.

"Interestingly, Trump's own products are made in a lot of countries that aren't named America," she said in an economic policy speech last week. "Trump ties are made in China, Trump suits in Mexico, Trump furniture in Turkey, Trump picture frames in India, Trump barware in Slovenia. I'd love to hear him explain how all of that means 'America first.'"