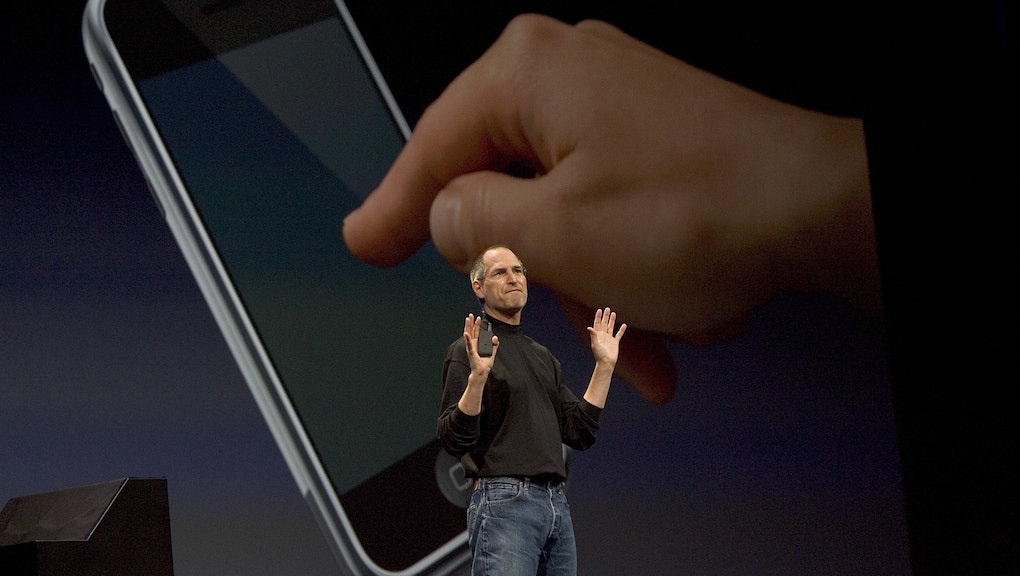 Wednesday, June 29, marks exactly nine years since the first generation of the iPhone was introduced in the U.S. In many ways, the original iPhone is obsolete now — its "killer app" was "making calls." We've come so far.

The first iPhone was touted for its inclusion of the Safari web browser and, speaking of obsolete, required a two-year contract with Cingular and was pre-3G.

Apple has discontinued the original iPhone, and it can no longer support updated operating systems. But it appears some people don't like change (or spending hundreds of dollars a year for a new phone). As of 2015, about 0.1% of iPhone users still used the original or second model, Time reported.

"It's a great looking phone, except for the huge bezels and garish chrome ring, but the design holds up," Reddit user ggabriele3 said in a message. "It's interesting to see how the iPhone 6 and 6s are kind of a return to the original rounded aluminum candy bar design."

Ggabriele3 restored and is currently using the original iPhone they found in their drawer a few years back. Based on other redditors' experience with the original iPhone, it's not for people who love apps or speed. But if you're just looking for a shiny piece of metal to call and text, it holds up.

"Super laggy, but all I really do is just phone people," DrNofap_MrFap said on Reddit a year ago. "Honestly I don't really enjoy using smartphones that much and all I do with this phone is to contact my family, talk to my S.O. when I am inside campus and text people. It's not like I am using the shitty Safari it has, or the shitty app store that doesn't even work."

"Still using it daily although most apps don't work," btuter said on Reddit last year. "I have the EDGE network which is very slow ... I may switch to the iPhone 6 when I see it."

"It lasts longer between charges than my 5 does, and it's a 7-year-old battery," veepeedeepee said on Reddit a year ago. "Granted, it's using far less power for processing, but still... I'd be all for a fatter iPhone if it meant I can go all day without it dying at lunch."

"I loved this iPhone in 2007," veepeedeepee said on Reddit. "I still think it's the best-looking one they've designed... But using it today is sloooooooow."

"From an ergonomic experience, [the original iPhone] was the best of all of them to hold," veepeedeepee said in a Reddit message. "Even the smooth, thin iPhone 6 of today feels too large — and its size makes it difficult to easily reach the opposite corner with a thumb. This was not a problem with [the original] iPhone. The size is/was perfect."

"Other than giving the usual phone calls and texting not much I mean it's very useless for using the internet as it's super laggy," DrNofap_MrFap said. "Painfully laggy, but I will withhold the urge of buying a new smartphone until my iPhone gives up on me or 2018 comes by." Just in time for the rumored all-glass wraparound display.

DrNofap_MrFap said on Reddit that they bought the original iPhone on the first day of its release but "it's shit" compared to his sister's iPhone 6.

Using the original iPhone is a masochistic reminder of today's advancements in technology.

"The original iPhone, being made of aluminum, had a great tendency to accumulate dents and dings — especially in the corners," veepeedeepee said in a message. "Most folks I know who had that original iPhone had phones with dented corners."

"The ports do fill up with pocket lint often," btuter said on Reddit.

"I am still kicking it old school with my original iPhone every once and a while," grnd said on Reddit three years ago. "It is always a fun thing that comes up in the conversation when people see it. It just goes to show how far we've come."

"I have mine too," ggabriele3 said on Reddit a year ago. "It needed a new headphone jack and volume button, but I was able to find parts and fix it. Only problem is that it thinks there are headphones plugged in when they are not. And the opposite when you plug them in. Not sure how to fix that."

"Going back to using my original iPhone is somewhat painful today," veepeedeepee said. "Few websites will load properly, there are hardly any apps that will run, and the last iteration of iOS that was released to run on the device only seemed to make it sluggish. It should be noted that it does email just fine." They added:

"But ergonomically and aesthetically, I still think it's the best iPhone."