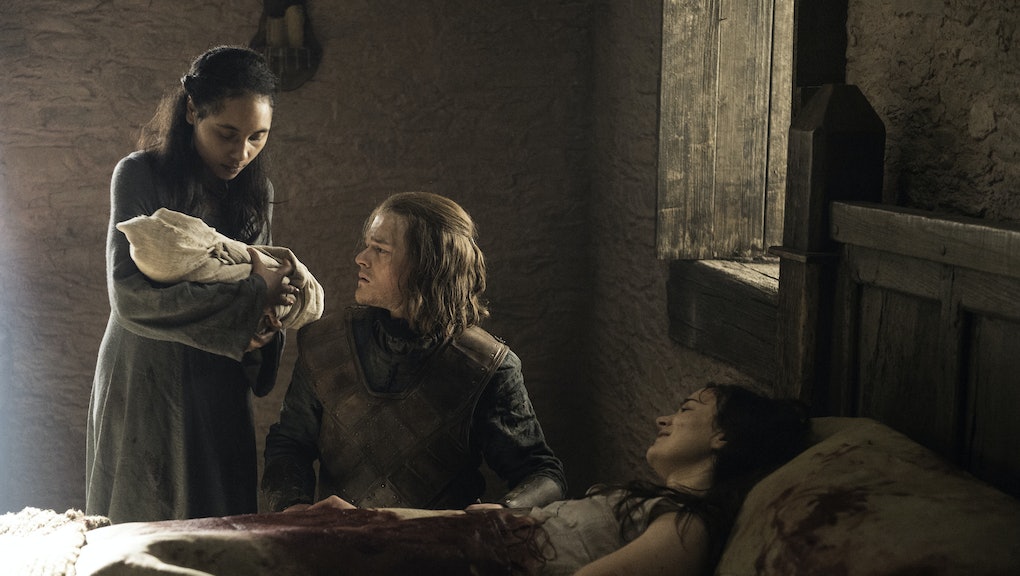 When you consider that the first book in George R.R. Martin's A Song of Ice and Fire series was published in 1996, the Game of Thrones fan theory on Jon Snow's true parentage was two decades in the making. The confirmation in Sunday's season six finale, that Snow is the son of Ned Stark's sister, Lyanna, and almost certainly the son of Rhaegar Targaryen, was one of the biggest moments in the series. However, that revelation comes with an entirely new set of questions.

While Lyanna clearly explains to her brother that her child would be in danger if he was ever discovered by Robert Baratheon, she also whispers his name to Ned, and it definitely doesn't sound like "Jon."

What did she say, exactly? Redditor sparkledavisjr believes Jon's true name is Jaehaerys, and explains why it would make sense.

"Jaehaerys I was the fourth Targaryen king to sit the Iron Throne," the user wrote. "He was known as 'the Wise,' 'the Conciliator' and 'the Old King.' His long rule was prosperous and he was aided by his sister-wife Alysanne, who convinced Jaehaerys to expand the Night's Watch and granted them the land now known as the New Gift. Jaehaerys II was Jon's great-grandfather."

Of all the Targaryen rulers to be named after, Jaehaerys would be a solid choice, as Jaehaerys I was considered one of the best kings Westeros ever had. Likewise, it makes sense for Ned to have changed the name of Lyanna's child, as a Targaryen-esque name would've been easily distinguishable — and Robert never let go of his Targaryen hatred in the series.

Jon's name, meanwhile, could have several inspirations, including Ned's close friend, Jon Arryn. Or, as sparkledavisjr notes, the previous Starks from the family lineage in Jon Stark (a former King in the North himself, like Jon Snow) or Jonnel Stark, who was a Lord of Winterfell.

You can revisit the Tower of Joy scene between Ned and Lyanna below. (The redditor claims to have watched the scene 50 times to confirm the "Jaehaerys" suspicions, but we don't suggest you do the same.)