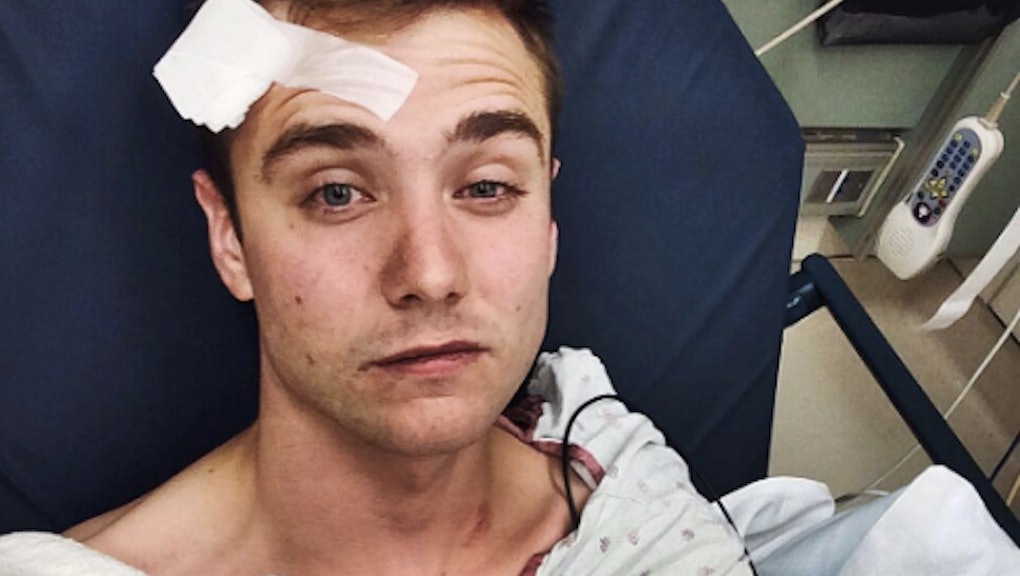 On Monday, gay YouTube celeb Calum McSwiggan posted a photo to Instagram of himself in a hospital gown, injured from what he said was an attack by three men in West Hollywood. As of Wednesday morning, the sheriff's department said it was "unable to substantiate" McSwiggan's story — arguing instead that he'd been arrested for vandalism and inflicted the pictured injuries on himself while in custody.

"Victims should be given the benefit of the doubt and allowed immediate medical advice and council in a crisis," he wrote, cataloguing his injuries.

According to McSwiggan, the arresting officers didn't buy his story because they couldn't see evidence of an assault on his face when they arrested him for having kicked off the wing mirror on the attacker's car. The officers put him in a holding cell and, he said, ignored his requests for counsel. When his father finally called the station, he was told he'd have to post $20,000 to get McSwiggan out. That's when the 26-year-old claimed he started hurting himself in order to get to a hospital.

It had the desired effect. McSwiggan was taken to the hospital, where he received the medical attention he needed, he wrote in the post. His lawyer allegedly advised him and his friends to keep the details of the arrest under wraps until after McSwiggan appeared in court Wednesday morning.

The YouTuber doesn't blame the police, he said, but he is incredibly disheartened to have experienced what he called victim blaming.

I'm heartbroken about the events and these have been the worst few days of my life. Many people are trying to discredit my story but this is the full and entire truth. Being accused of being a liar and being called a disgrace to the LGBT+ community, a community I've dedicated my life to, is more painful than any hate crime could ever be.

The post has accrued 85 comments at time of writing, largely (but not entirely) from people who don't believe McSwiggan and are indeed blaming him for the events.

Still, it would seem that many people believe him. One Twitter user offered a tip to help McSwiggan find the perpetrators.

Mic has reached out for comment and will update as more information becomes available.