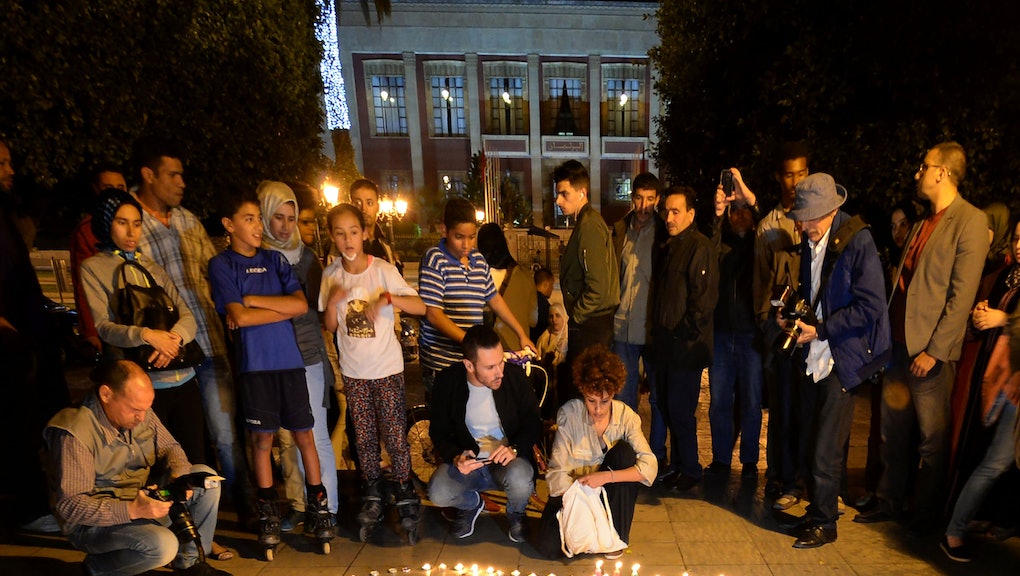 Gay Men in Ivory Coast Were Outed by the U.S. Embassy With This Photo After Orlando Attack

Closeted gay men in the Ivory Coast have to now flee their homes after the U.S. Embassy posted a photo on its Facebook page revealing their identities and outing their sexuality.

The photo, which has since been taken down, was published on June 16. It featured the men signing a condolences book for the shooting at a gay night club in Orlando, Florida, where 49 people were killed. As reported by CBS News, the caption read: "LGBTI community signing the condolence book."

The men were attacked and harassed by mobs shouting homophobic slurs.

Out of the six closeted men pictured, two of the men in the widely shared photo said they were assaulted and harassed by mobs of people shouting anti-gay slurs. Four of them were forced to flee their homes when their friends and family found out about their sexuality.

Days after the photo was posted, one of the men told Reuters that an anti-gay mob pushed him to the ground, beat and robbed him. They stole his phone and wallet.

"I don't have a life anymore," the 36-year-old told Reuters in a phone interview. "I can't go out. I don't know who might recognize me."

He also said he fears he will never be able to return home.

When expressing regret for the violent backlash, Press Officer Elizabeth Ategou told CBS that the men were notified that the photo taken would be published. However, the men insist that they were never personally contacted by the embassy for permission to post the photo online.

According to CBS, the embassy contacted three LGBT organizations in the Ivory Coast for permission. The leaders of all three organizations gave their approvals, but were not in attendance at the embassy event.

A leader for one of the LGBT organizations that approved the photo, speaking under anonymity to CBS, said he would have never given the green light for the photo if he knew that the caption would label them as members of the "LGBTI community."

While same-sex relationships aren't criminalized in the Ivory Coast, stigma and violence against the LGBTQ community is still prevalent. Many anti-gay incidents and hate crimes aren't reported since many people in LGBTQ communities fear of repercussions. There are also no legal protections against discrimination on the basis of gender identity and sexuality.

In January 2014, an anti-gay mob of 200 people ransacked Alternative - Côte d'Ivoire — the most prominent gay rights organization in the Ivory Coast — and protested with homophobic slurs. The mob made threats to the organization and destroyed property, robbed equipment and injured their security guard.

A 2011 U.S. State Department report found that gay men were repeatedly subjected to violence and the Ivorian government didn't take any action to combat anti-gay violence.

"[The] societal stigmatization of the LGBT community was reportedly widespread, and the government did not act to counter it during the year," the report said. "Gay men were reportedly subjected to beatings, imprisonment, verbal abuse, humiliation and extortion by police, gendarmes and members of the armed forces." the report said.

The State Department also revealed that the armed forces of the Ivory Coast, Force Republiques de Côte d'Ivoire, had reportedly beaten and abused gay men and transgender people — most were sex workers.