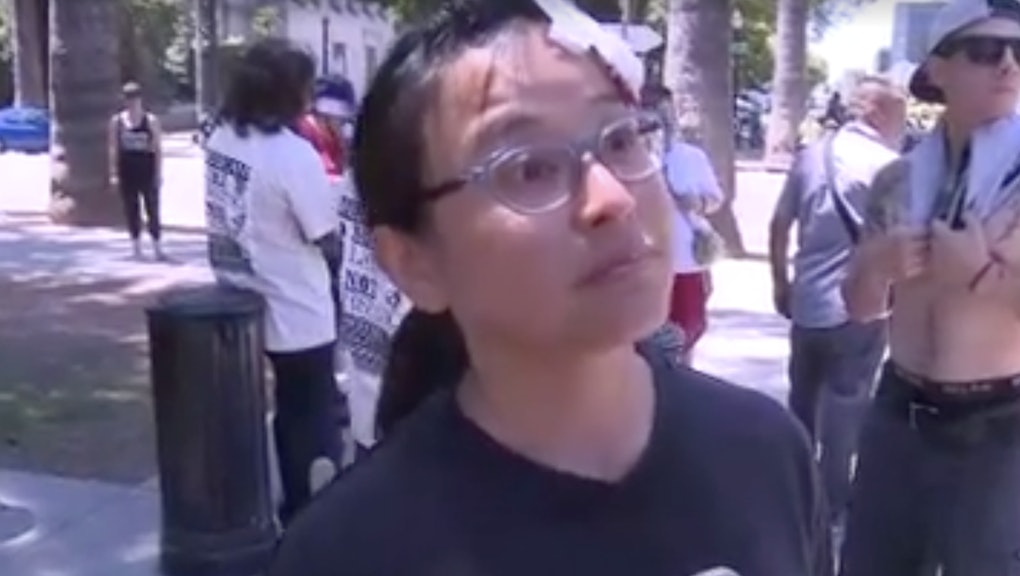 Footage capturing last weekend's neo-nazi rally at the state capitol in Sacramento, California, revealed a North Berkeley middle school teacher and activist swearing and throwing punches at one of the white supremacists. "Get the fuck off our streets," Yvette Felarca, who later sustained a head injury, can be heard saying.

Felarca and others decided to counter-protest a permitted neo-nazi rally to "stop and prevent more violence by the racists against our communities, especially to defend the rights of immigrants communities," she told the Sacramento Bee.

This is especially imperative in the time of a potential Donald Trump presidency, Felarca wrote on Facebook, adding that she blames Trump for promoting such racist ideologies to others.

She also told reporters that her actions were in self-defense.

Felarca believes the rallies are used for recruiting more neo-nazis. The rally was organized by the Golden State Skinheads and Traditionalist Worker Party.

Police said the counter-protestors were the ones to start the violence.

A witness of the rally told the Los Angeles Times that counter-protestors were throwing wooden stakes and water bottles at the neo-nazis.

As a result of the violence, nine people from both protesting groups were hospitalized.

Afterward, people discovered what school Felarca worked at and began to send threats of violence on the school if she wasn't fired.

"I hold Donald Trump responsible for this," Felarca wrote on Facebook in response to the threats. "His politics of racist demagoguery and hate is inciting these vile threats of violence, even against children. It exposes why Trump and his racist, Nazi and KKK supporters need to be defeated — and it shows us what Donald Trump's vision for America really is, and why we need to keep building the movement."