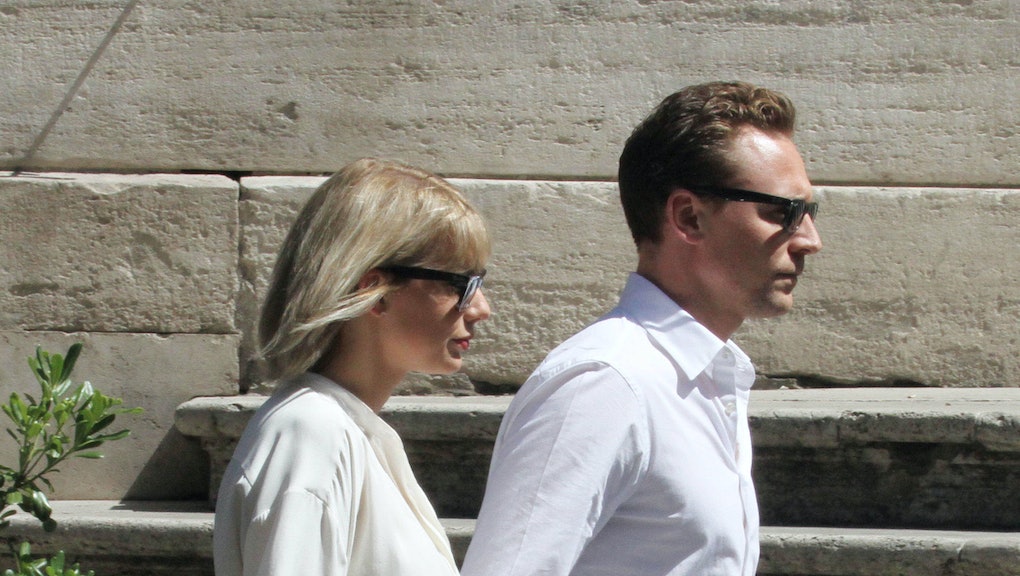 Why Is Taylor Swift Wrapped in a Cocoon of Silence on Social Media?

The past few weeks of celebrity news have basically been nothing more than a montage of images from a big-budget romantic comedy called Hiddleswift. Taylor Swift and Tom Hiddleston are everywhere — both geographically (Rhode Island! England! Rome!) and in the media.

For all the media hoopla Swift has generated since her June 1 breakup with Calvin Harris and subsequent whirlwind relationship with Hiddleston, her Instagram and Twitter accounts have been almost entirely inactive. On June 5 she posted two pictures from a wedding she crashed, and on June 17 she posted a tribute to Orlando victims. And that's it.

"What's it going to take for Taylor Swift to emerge from this cocoon of social media silence?" you might wonder. "Her best friend Abigail, whose romantic life was the focus of the 2008 song 'Fifteen,' finding love and getting engaged?"

Nope! Not even that will do it. Abigail announced her engagement late Tuesday night — yet Swift remained silent.

The fact that @taylorswift13 has been M.I.A. for basically the entire month of June is very much off-brand. For the sake of comparison, last June she tweeted almost daily. And she is typically an Instagram heavyweight, frequently taking to the app to wish her friends happy birthday, share pics of those she welcomes to the stage and update fans on her cats, Olivia and Meredith.

So why the sudden silence?

Given that it's only been a month since Swift and Harris broke up, she may well be taking a post-breakup social media hiatus to reflect on things and not draw attention to herself while she tries to move on with her life. She already completed step one of the "post-breakup social media cleanse," in which you delete all photographic evidence that the relationship ever existed, so abandoning social media altogether isn't a huge leap.

Swift might also be making a concentrated effort to keep her new relationship off social media in the first place. For the sake of comparison, Taylor and Calvin 'grammed the shit out of their 15-month relationship, only to delete all traces of the evidence months later. Like others in the "keep new relationships off of social media" camp, it could be that Swift just wants to let Hiddleswift unfold naturally, without the pressure of getting likes and shares.

Of course, it's not as if Hiddleswift is keeping a low profile. The two have been snapped by paparazzi in both public and remote places, indicating that Swift's social media hiatus could very well be a way to drum up public interest in her next big project. This explanation would certainly jibe with some of the Hiddleswift conspiracy theories floating around, such as the theory that Swift is staging the relationship desire to distract people from less than flattering press coverage.

So maybe all this breathless speculation is exactly what Swift wants. Or maybe she's just stopped giving a fuck about social media and just wants to trot the globe with the man she loves. Whatever the case may be, it's clear Taylor Swift's cocoon of social media silence is more than likely very intentional. We just don't know why — or when we can expect her to spread her wings and fly out of it.