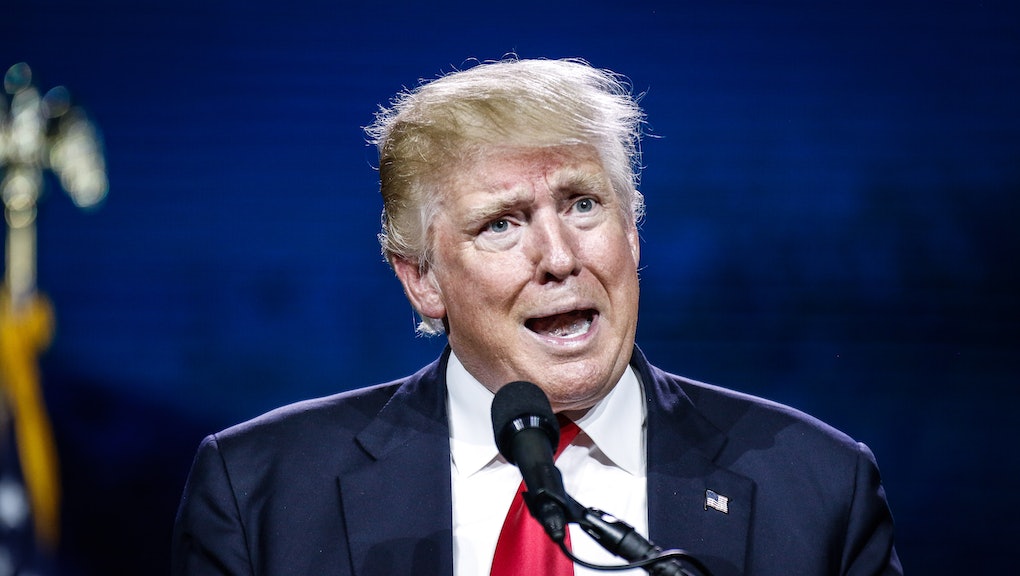 On Saturday, Cheeto-Jesus-for-president Donald Trump tweeted a meme of Hillary Clinton, apparently pulled from a neo-Nazi message board. The Star of David meme looks to be the work of @FishBoneHead, a Twitter account that traffics in racist memes, and it features the presumptive Democratic nominee's face against a background of cash and text reading, "History made." What seals the meme's anti-Semitic intent is the red Star of David next to Clinton's face, featuring the burst: "Most Corrupt Candidate Ever!"

Given the tweet's obvious bigotry, Trump removed it. But the fact that he posted it at all was unfortunately unsurprising. As any human on the internet will be well aware, it fits within a much larger pattern of bullying, trolling and hatred-spouting from the presidential candidate.

Even his foremost opponent in the presidential race, Hillary Clinton, has told Trump to delete his account. Here are nine gross Trump Twitter moments that illustrate

1. That time he made the Orlando shooting all about him

After news broke that the deadliest mass shooting in U.S. history had just occurred on American soil, Trump offered some pat condolences before immediately making a large-scale tragedy all about him. In a tweet sent hours after the attack, the candidate took credit for "being right on radical Islamic terrorism." He said he wanted not congrats but "toughness & vigilance."

What he really wanted, it seemed, was to further his own political agenda, and Twitter called him out.

2. That time he praised Muhammad Ali after tweeting confusion about existence of Muslim athletes

Following the boxing legend's death in early June, Trump heaped praise on the "truly great champion and a wonderful guy."

The kudos to Ali would've been perplexing enough, given the candidate's previously espoused thoughts on both black people and Muslims, but it was a specific tweet he'd written about Muslim athletes months earlier that had the internet scratching its internet head.

3. That time he shared some "facts" on "black-on-black crime"

In November, Trump retweeted neo-Nazi propaganda that presented a picture of gun crime in the U.S., edited to advance some racially skewed theories about police violence. The fact sheet proved to be anything but, presenting invented FBI data in support of the baseless assertion that African Americans, and rarely the police and rarely white people, are responsible for the gun deaths of other African Americans. It also alleged, erroneously, that white people don't kill white people: black people kill white people.

He then defended the move to Bill O'Reilly, inferring he didn't have time to fact-check every tweet. "All it was is [sic] a retweet," he said.

4. That time he tried to troll "Crooked Hillary" but ended up proving her exactly right

In early June, Clinton took Trump to task for his unruly trolling habits. During a San Diego foreign policy address, she belittled the Republican candidate's dearth of experience and general demeanor, saying, "We all know the tools Donald Trump brings to the table: bragging, mocking, composing nasty tweets. I'm willing to bet he's writing a few right now." Her line landed at approximately the same time Trump tweeted the following:

The internet missed neither the timing nor Trump's misspelling of "teleprompter" and ridiculed him for both.

5. That time Trump enjoyed a taco bowl in celebration of Cinco de Mayo and his "love" for "Hispanics"

Nearly a year after launching his presidential bid with charges against Mexicans — whom he characterized as rapists, criminals and drug-runners — Trump shared a photo of himself lording over a taco bowl made where the best taco bowls are made: the Trump Tower Grill. Wishing his followers a "Happy #CincoDeMayo," he capped off the post, "I love Hispanics!"

Clinton's team didn't miss a beat and took to trolling Trump immediately, saying what many onlookers were thinking:

In March, Trump attempted to incite outrage at a reporter after his campaign manager, Corey Lewandowski, was charged with assaulting journalist Michelle Fields. It didn't work. He tweeted a zoomed-in photo of a reporters hand holding a very obvious something, close to his sleeve. "Why is this reporter touching me as I leave a news conference? What is in her hand??"

Ask and you shall receive: Trump was given the answer to his question — a pen — as well as a whole lot of shit about his famously small hands, in what many perceived as apparent idiocy and his crazy politics.

In February, Trump showed his appreciation for a history he's been accused of helping the world to repeat by retweeting a quote from Italy's fascist dictator and Adolf Hitler's ally, Benito Mussolini. One user, @ilduce2016, tweeted, "It is better to live one day as a lion than 100 years as a sheep" with the hashtag #MakeAmericaGreatAgain at the candidate, who approved. And for anyone who thought he did so unknowingly — given his habit of feigning ignorance when his social media account perpetuates racism and/or white nationalism — Trump clarified his position.

"Mussolini was Mussolini," he said at the time. "It's a very good quote, it's a very interesting quote. I know who said it, but what difference does it make whether it's Mussolini or somebody else?"

8. That time he threatened to sic his supporters on Bernie Sanders

In March, after a long string of Trump events had turned violent, the candidate pegged the unrest on Democratic contender Bernie Sanders. "Bernie Sanders is lying when he says his disruptors aren't told to go to my events," Trump tweeted. "Be careful, Bernie, or my supporters will go to yours!"

Following as it did so many rallies-turned-riots, along with Trump's assertion that he'd pay any fees incurred by supporters who dealt with anyone "getting ready to throw a tomato," Trump's wielding his supporters against his opponents looked not unlike inciting riots. Not a good look. Or a presidential one.

Just after jumping in the presidential race in July 2015, Trump tweeted a collage with the #MakeAmericaGreatAgain hashtag and the caption, "We need real leadership. We need results. Let's put the U.S. back into business!" The image was that of the American flag superimposed over Trump's face, some $100 bills, the White House and a band of S.S. soldiers. The latter weren't real members of Hitler's army, but re-enactors. Trump deleted the tweet and quickly pointed the finger at an intern.

The candidate, however, runs his own Twitter account and former interns have said they're not allowed to access it. It would seem likely, then, that Trump had a hand not just in this offensively oblivious tweet, but in all the above.