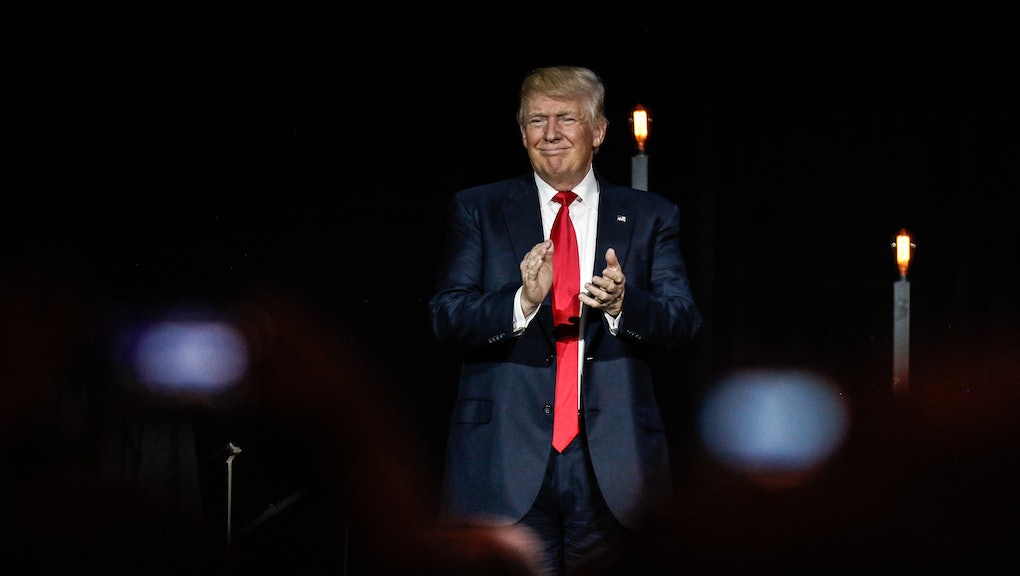 Donald Trump, whose account recently tweeted an image of Hillary Clinton accompanied by a Star of David overlaid with the words "Most Corrupt Candidate Ever!" denied the image was ever intended to convey an anti-Semitic message Monday.

Instead, Trump says, the image — which Mic verified had circulated among online white supremacists before landing on Trump's Twitter page — depicts nothing more sinister than a sheriffs' badge.

For the record, this is the image in question:

The symbol is plainly recognizable as a Star of David — enough so that someone quickly deleted it from Trump's account and replaced it with a modified version.

The difference between then and now may be that former Trump campaign manager Corey Lewandowski, who now works for CNN, was willing to float the "sheriff's badge" theory and call the controversy the result of "political correctness run amok" during a TV appearance on Sunday.

But the explanation is a stretch, to put it lightly. Mic found when the image found its way to /pol/, the online alt-right board dominated by "neo-Nazis, anti-Semites and white supremacists newly emboldened by the success of Trump's rhetoric," the file's name was HillHistory.jpg, a possible reference to the phrase "Heil Hitler" and the role of the letters HH and their correlation to the number 88 in neo-Nazi symbology.

Other postings by a Twitter account where the image was posted, @FishBoneHead1, had equally explicit racist overtones.

It's not the first time Trump has employed a dubious bit of reasoning to justify a Twitter post linked to right-wing extremists. When Trump retweeted baseless statistics on black-on-black crime, originally posted to Twitter by a neo-Nazi, he responded to criticism by asking Fox News host Bill O'Reilly, "Am I gonna check every statistic? All it was is a retweet."

After the candidate retweeted a Benito Mussolini quote posted by a Gawker parody account, Trump retorted that he wanted "to be associated with interesting quotes."

"When Trump's team sources memes, images and other forms of media from Twitter, the team has a longstanding pattern of attributing the account from which they found it," wrote Mic's Anthony Smith. "Among the many benefits of this practice of attribution is that it creates a desirable distance between the presidential candidate and the images he tweets. This distance can — and has — proven beneficial when the account tweets something inflammatory and racist."