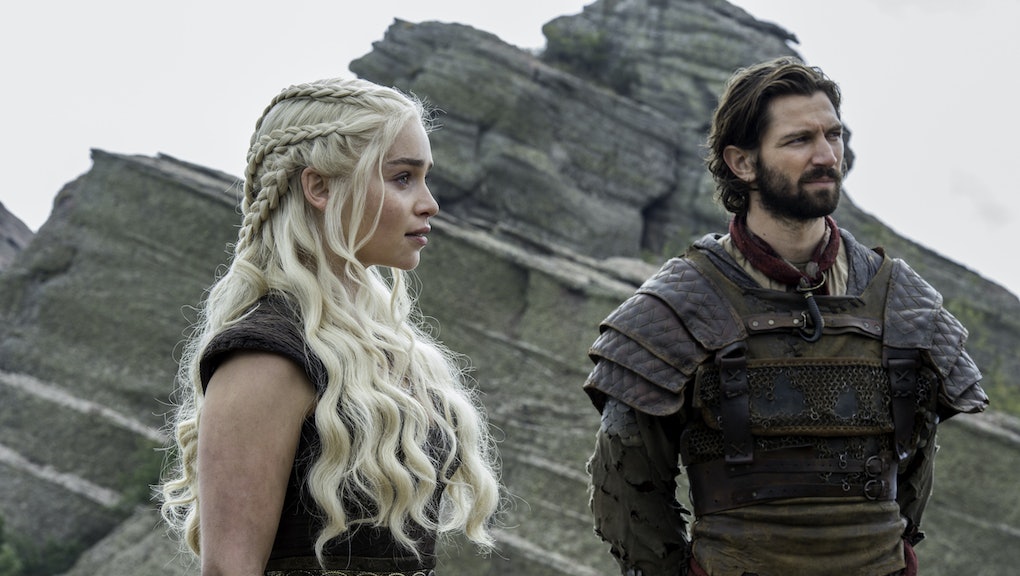 It's taken six seasons and more than a few people burned alive, but Daenerys Targaryen has finally set sail for Westeros with an impressive fleet of Greyjoy ships, loyal Dothraki followers and three dragons in Game of Thrones' season six finale. However, before Dany could leave Meereen, she had to leave someone behind: her loyal protector-with-benefits, Daario Naharis.

Her reasons for leaving Daario in Meereen were just — she needed someone she can trust to rule over the city and ensure that it doesn't fall back into slavery while she's across the Narrow Sea. More importantly, though, the Mother of Dragons is looking for potential suitors in Westeros, to help secure some alliances in her journey to the Iron Throne.

While a Bachelorette-esque contest for Dany's love and affection would be an entertaining spin-off (Ramsay Bolton would've been Westeros' Chad, if he still had a face), there aren't a whole lot of options for her at this point. The logical choice — and the one many fans are already shipping — is a marriage between Dany and Jon Snow, the new King in the North.

There are some caveats for Jon and Dany's potential marriage, however. With the official confirmation of R+L=J showing that Jon is the bastard son of Rhaegar Targaryen and Lyanna Stark, Daenerys is actually Jon's aunt. Incestuous pairings have never much bothered the Targaryens, but they and the Starks haven't had an amicable relationship since the Mad King brutally killed Ned Stark's father and brother.

Still, Jon is Dany's only logical remaining option, and their pairing would actually fulfill an ancient pact between the two houses, dating back to before all the Mad King's madness. As Nerdist explains, during a civil war between the Targaryens, known as the Dance of the Dragons, the Starks supported the claim of Queen Rhaenyra Targaryen. The condition of this support was that a Targaryen would marry a Stark, securing an alliance between the families.

That pact was never fulfilled with a marriage, which means it's technically still on the table (though after Cersei's fiery ascension to the Iron Throne, traditional rules in Westeros need not apply anymore). But it could be enough to justify Jon marrying his aunt, especially when Dany has the type of literal firepower that should prove useful when the White Walkers make their way south.

At the very least, Dany and Jon meeting face-to-face in the show seems inevitable — as one examination of George R.R. Martin's A Song of Ice and Fire series posits Jon and Dany are the embodiments of ice and fire, respectively.

But boy, do fans want this marriage to happen. This is likely to be the only time incest will be openly supported as a storyline — once again, proving how unique Game of Thrones is to television.