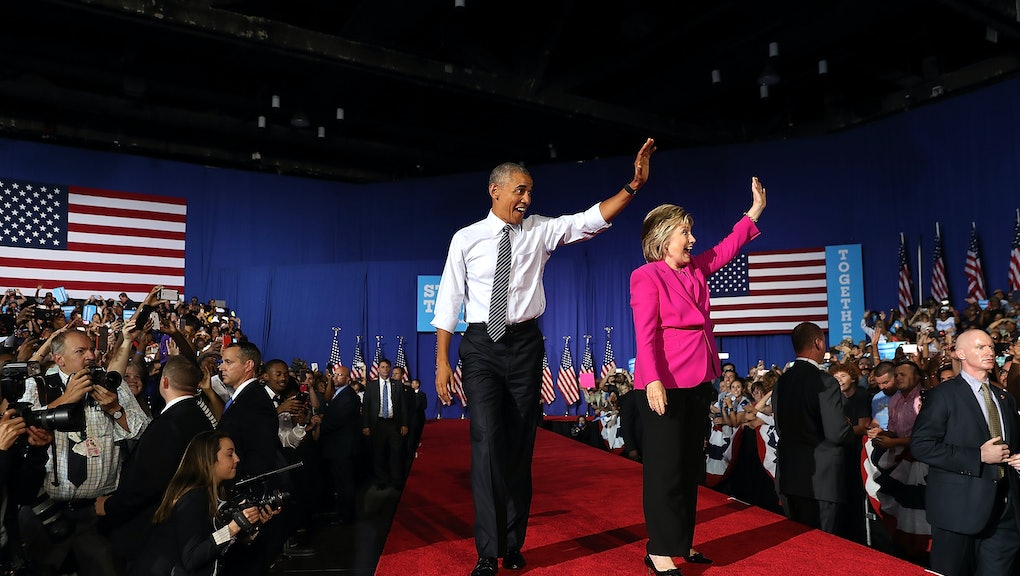 CHARLOTTE, North Carolina — President Barack Obama heaped effusive praise upon Hillary Clinton during a campaign rally Tuesday in Charlotte, North Carolina, making the case that only Clinton can build on the progress during his own presidency.

In front of an impassioned crowd gathered in the Charlotte Convention Center — some of whom waited more than two hours in the 92-degree heat to catch Obama and Clinton campaigning together for the first time in 2016 — Obama made the case that Clinton is the most qualified person ever to seek the White House. It was Obama's first appearance on the campaign trail on behalf of his former secretary of state and one-time rival.

He talked up her past, saying she's always fought "for anybody who's experienced injustice, anybody who's faced discrimination, anybody who does everything right and still can't seem to get a fair shot."

Obama offered a glimpse of what Clinton is like "when the cameras are off," saying, "I saw how deeply she believes in the things she fights for."

He defended her from critics who say that Clinton being part of the "establishment" made her less qualified for the job, saying that experience in politics is necessary, just like it's necessary for pilots and doctors.

"Sometimes, we take someone who has been in the trenches and fought the good fight and been a steady hand for granted," Obama said. "That means that sometimes Hillary doesn't get the credit she deserves. But the fact is, Hillary is steady and Hillary is true, and she has been in politics for the same reason I am: Because we can improve other people's lives by doing this work."

At times, Obama was speaking directly to supporters of Sen. Bernie Sanders — some of who have formed the "Bernie or Bust" movement, vowing never to vote for Clinton.

"If your concern is working people, then it's not a choice. I don't care if you're white, black, Hispanic, Native American, polka dot, male, female; I don't care," Obama said, adding that the line was "off-script." "I don't know how you vote for the guy who is against the minimum wage, against unions, against making sure that everybody gets a fair shot, against legislation for equal pay, against paid family leave, against a lot of the things that working families count on."

"She offers a smarter approach," Obama said of Clinton.

The fact that Clinton and Obama chose North Carolina to host their first joint appearance is no accident. Winning North Carolina — a solidly purple swing state — would be key to Clinton's hopes at the White House.

It's unlikely Trump could win the 270 Electoral College votes needed to win the White House without putting North Carolina in his column.

Polling between Clinton and Trump currently shows the state is a jump ball in November.

While Obama relished being back on the campaign trail, his first joint appearance with Clinton was in part overshadowed by events from earlier in the day.

Earlier Tuesday, the FBI announced it was ending its investigation into Clinton's use of a private email server during her time as secretary of state and recommended against charging Clinton with a crime.

However, FBI Director James Comey also issued a rebuke of the way Clinton handled classified information at the State Department, giving Republicans continued ammunition against her in the fall.

Neither Obama nor Clinton mentioned the FBI decision during their hour-long remarks.