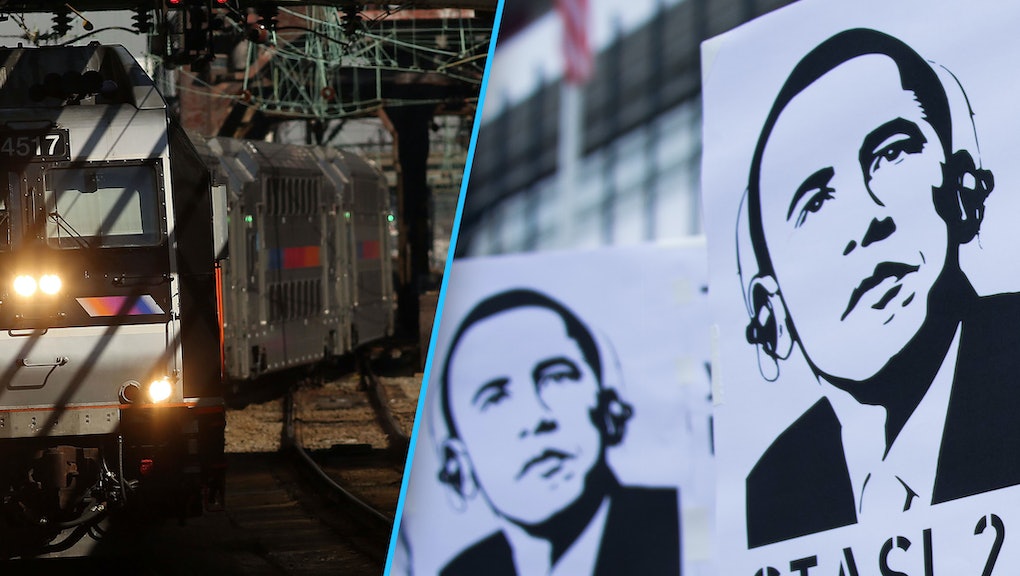 One icon stands out above all others as a symbol for government surveillance: the eye. Glaring, all-seeing eyes are used in posters, art and graffiti to warn us that we are being watched.

But don't forget that the ear can be just as powerful. In fact, there's a growing trend of placing scores of microphones in public places — particularly on trains and buses where those mics could overhear private conversations.

In New Jersey, trains are wired up with hidden microphones on urban light rail lines. In Maryland, it only took four years to increase a small audio surveillance program of almost a dozen vehicles to include nearly 500 wiretapped buses. In San Francisco, microphones were hidden in a bus stop to record conversations without a warrant.

In New Jersey's case, the excuse for these microphones is that they help fight terrorism. If the threat of a terror attack on the River Line light rail to Camden seems farfetched, terrorism is often a convenient excuse for increasing dragnet-style surveillance, even if that surveillance has little proven ability to fight terrorism.

Instead, putting microphones on buses provides the police even wider access to groups they've been historically interested in: minorities, the poor and the working class.

"Public transit is overwhelmingly the province of poor Americans, who are also overwhelmingly racialized Americans," technologist and blogger Cory Doctorow wrote Monday on BoingBoing. "No one is proposing to fill the first class cabins of airlines with hidden mics (though the 9/11 terrorists flew in that cabin)."

Most of the time that these microphones are on, no one is actually listening in live — the mics just lie in wait, collecting information to use later. But look at the machine learning that both Facebook and the government use for facial recognition, and you can envision the future of 21st century microphones.

Even now, there is an arms race between Google, Amazon and Apple to create technology that accurately recognizes voices and deciphers their meanings so that they can improve the function of personal assistants like Siri, Alexa and Google Home.

Future microphone systems could deploy that same machine learning to determine the identity of a speaker in real time. And when a hidden microphone can discern who and where you are when you think you're whispering to a friend or confidante, the only option for maintaining secrecy could be silence.