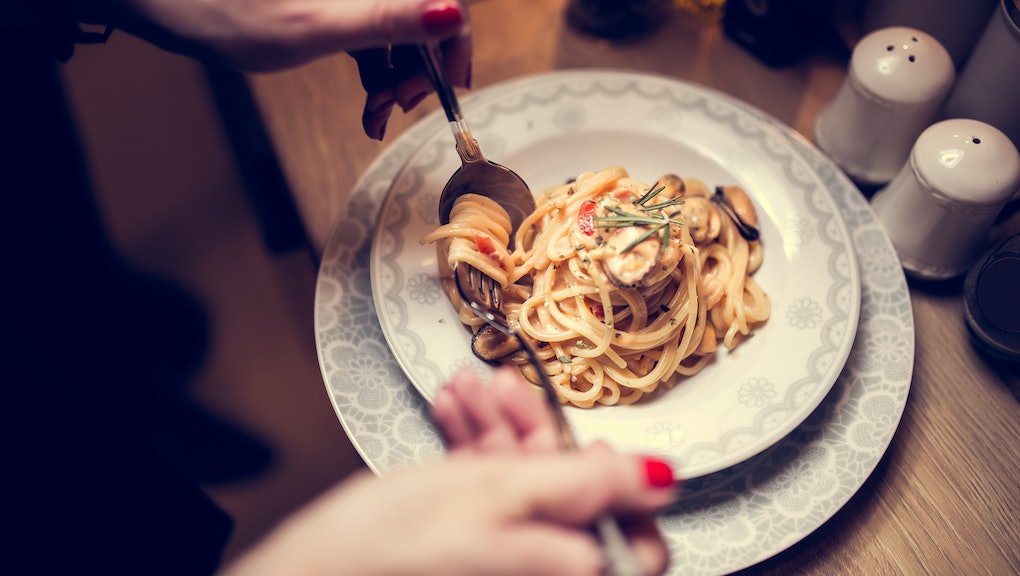 There's good news for people who love good noodles: Scientists have found that pasta isn't really all that bad for you. In fact, contrary to what everyone on the Atkins diet would have you believe, it can actually even help you lose weight.

Pasta, as anyone who's ever lost themselves in a bowl of spaghetti and meatballs knows, is extremely, perhaps even objectively, delicious — and like all things delicious, it's usually one of the first items to go when someone is trying to clean up their diet or lose weight.

But the bowl of spaghetti pomodoro won't spell disaster for your waistline, according to a new study published in Nutrition and Diabetes by researchers from the Neuromed Institute in Italy.

In fact, it may do just the opposite.

Study author George Pounis said in a press release, "We have seen that consumption of pasta, contrary to what many think, is not associated with an increase in body weight, rather the opposite. Our data show that enjoying pasta according to individuals' needs contributes to a healthy body mass index, lower waist circumference and better waist-hip ratio."

But before you go pound a giant bowl of cacio e pepe in the name of health, know that the link researchers found between pasta consumption and being healthy is based on people eating noodles as part of a Mediterranean diet. The diet, which is considered to be one of the healthiest in the world, consists mainly of olive oil, fish, vegetables and legumes, the Mayo Clinic noted. This means they weren't pairing pasta with huge cuts of meat or overly creamy sauces (so step away from the fettuccine Alfredo).

Portion sizes also played an important role in the study, NJ.com reported. Pasta was not consumed as the main part of a meal, but instead as a side. The largest noodle portion participants ate was 86 grams, which is about three ounces or a third of a cup.  This is even smaller than the half-cup portion the United States Department of Agriculture recommends.

So go head, whip up some penne to eat with a vegetable-heavy dinner tonight. Share some spaghetti and meatballs with your lady or your tramp. Your body will thank you.

And if that weren't enough, just look at how happy these hamsters are: