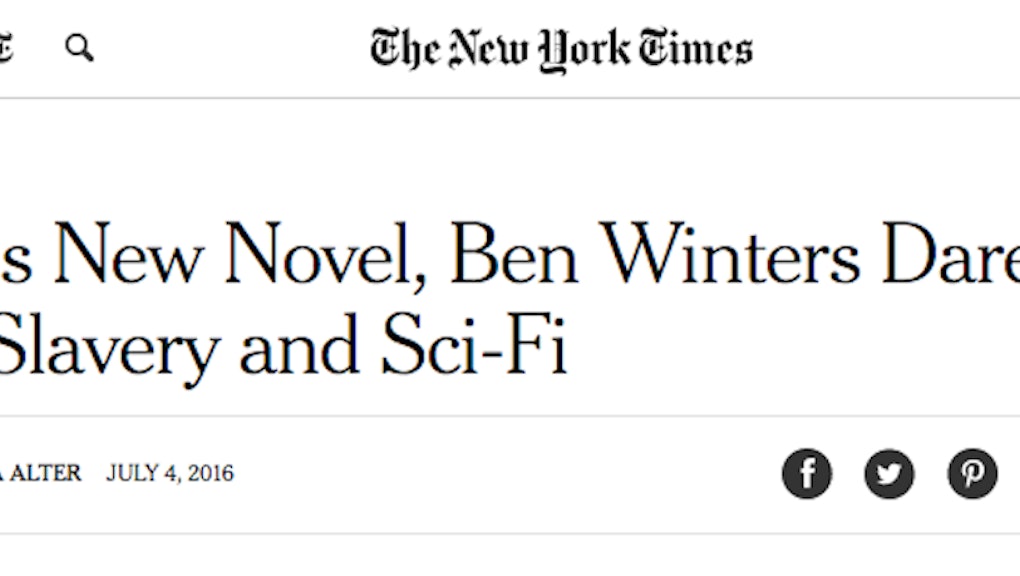 The Times' consensus? Winters was really "brave" to write about such a "risky" topic because he is a white man and his book is about black people and slavery.

"He's taking a direct whack at one of the main critical things that's happening in this country right now," Lev Grossman, a white critic and author, told the Times' Alexandra Alter. "This is a white writer going after questions of what it's like to be black in America. It's a fearless thing to do."

The review goes on to applaud Winters' courage and innovation, while failing to address the lengthy history of white people writing about slavery and black people long before him — not to mention the black writer whose formal innovations his work owes a debt to.

"In His New Novel, Ben Winters Dares to Mix Slavery and Sci-Fi," the article title reads, for instance — neglecting to mention that black author Octavia E. Butler "dared" to do the same thing 40 years before Winters did it.

In his interview with the Times, Winters nonetheless agrees that, yeah, it is super crazy that he's a white guy writing about black stuff in America today.

"The first impulse is to go, oh man, are you supposed to be writing about that, as a white American?" Winters said. "We tend to think of racism and slavery as something that's appropriate only for black artists to engage with, and there's something troubling and perverse about that."

Totally. Here's something else that's "troubling and perverse": For a solid chunk of U.S. history, enslaved black people were legally prohibited from reading or writing, period. This means that — contrary to all that seems "brave" and "risky" about Winters' work — white people were, in fact, the only people writing about slavery for very a long time.

"We tend to think of racism and slavery as something that's appropriate only for black artists to engage with, and there's something troubling and perverse about that."

Not to mention the most celebrated early novel to address black enslavement in America was Uncle Tom's Cabin, by white author Harriet Beecher Stowe. The 1961 sociology book Black Like Me also won renown for its white author John Howard Griffin — who went "undercover" disguised as a black man in the Jim Crow South as an experiment, partly because it required a white man saying so for white readers to believe that being black in the Jim Crow South sucked. And then, the gold standard of novels about the slavery-era South remains Margaret Mitchell's Gone With the Wind from 1936.

In short, the notion that there's anything uniquely innovative, either conceptually or formally, about Winters' work seems to ignore the many people who did the same thing before him — most notably the black woman whose genre-bending work preceded his by decades. In fact, the real problem seems to be that white authors have always been permitted to write about black people and slavery — whereas black people's views on these topics were far rarer until recently.

Call it the Kendall Jenner's "bold braids" of New York Times book reviews. Read the rest of it here.