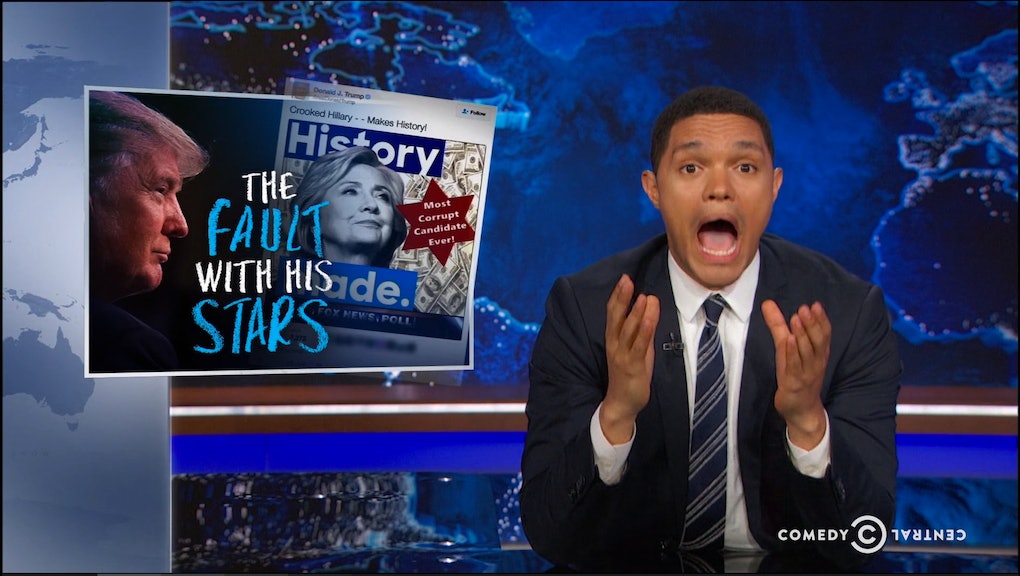 'The Daily Show' Blasts Donald Trump's Star of David Tweet for What It Is: Anti-Semitism

Trevor Noah was not going to let Donald Trump's latest, and one of his most controversial, missteps be swept under the rug. The Daily Show host blasted Trump for his social media account tweeting an image of Hillary Clinton overlaid on money next to the Star of David with the headline "Most Corrupt Candidate Ever" printed on it, which was previously featured on a white supremacist forum and a Twitter account that posts overtly racist memes.

"It's as if someone told Trump he's not allowed to be misogynistic anymore, so he was like, 'Fine, I guess I'll call her a Jew,'" Noah says.

The Trump campaign then "fixed" the problem, changing the image by replacing the Star of David with a circle.

But, Noah notes, it's such a bad fix that a small point of the star is still visible.

"I don't think Trump hates Jewish people," Noah concludes. "But I know that some of his supporters do, in addition to black people, Mexicans, Muslims — you know, most people. And Donald and his campaign don't do a very good job of disavowing those people. ... You may be trying to dog whistle to a certain group of your people, but you understand that your message is getting through to all of us. It's a normal whistle, and it's racist as shit."

You can watch the full segment from Tuesday's episode here.