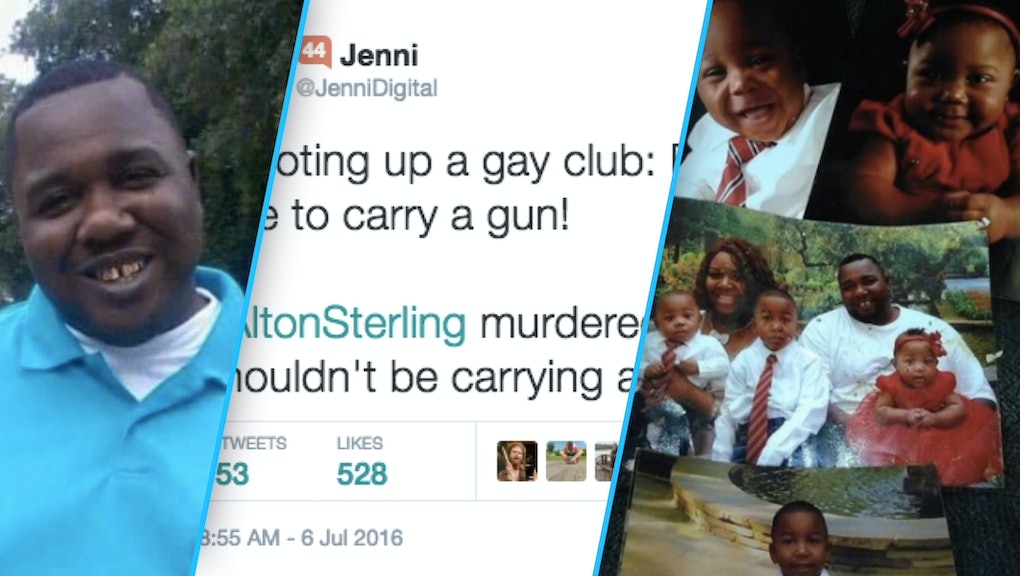 Alton Sterling, a 37-year-old black man, was shot and killed in Baton Rouge, Louisiana, Tuesday by police who said they found a gun in his pocket. But when 49 people were killed inside an Orlando nightclub in June, pro-gun politicians like Donald Trump argued that the victims should've been carrying guns for protection.

Twitter user @JenniDigital called out the hypocrisy exposed by these responses in one powerful tweet Wednesday. "Shooting up a gay club: Everybody should be able to carry a gun!," Jenni wrote. "Alton Sterling murdered by cop: Welp, he shouldn't be carrying a gun!"

The message? The officers who killed Sterling used the argument that he was carrying a gun to defend their actions, but whenever there's a mass shooting, pro-gun activists tend to argue that if more people carried guns, the death toll wouldn't have been as high.

In this case, this double standard has clear racial overtones. Conservatives seem to want people to carry guns, but when the carriers are black, gun possession is often used to justify killing them. Louisiana is also a "concealed carry" state, which means it's legal to carry some firearms — including handguns — there in a "concealed manner" with a permit.

Sterling was the 114th black man killed by police in 2016. Footage of the altercation, filmed outside a Baton Rouge convenience store by the store's owner, Abdullah Muflahi, shows the police pin Sterling to the ground before shooting him. The officers claimed they later removed a gun from his pocket, but the store owner told the New York Daily News he never saw a gun in Sterling's hand or saw him reach for a firearm at any point.