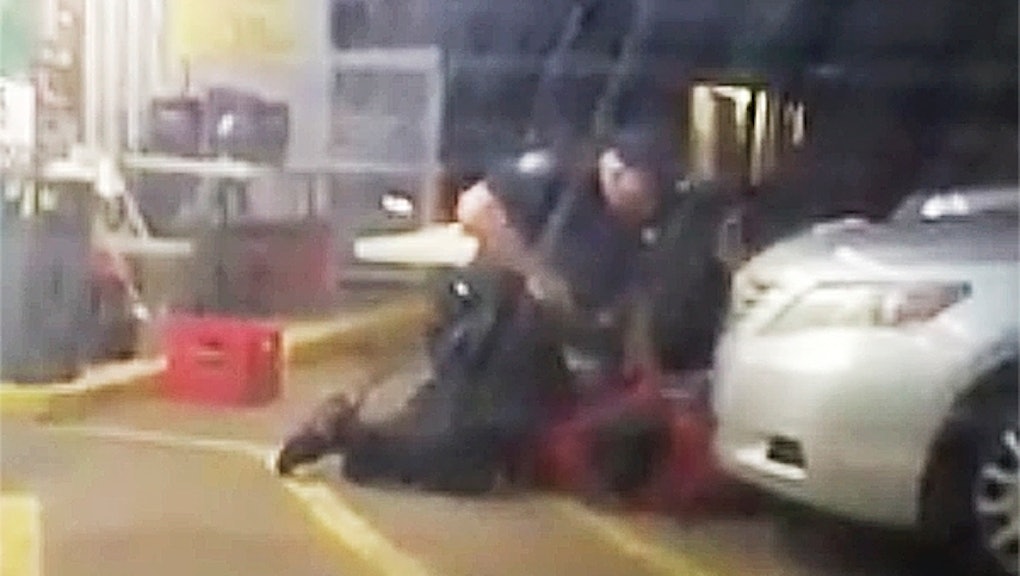 All three people killed by the Baton Rouge Police Department since June 2015 have been black men, according to figures compiled by the Counted, a database from the Guardian that has tracked officer-involved killings in the United States over the past two years.

Alton Sterling, 37, became the latest victim Tuesday when two police officers wrestled him to the ground and shot him multiple times in the chest and back.

In a city where black people make up less than half of the population — 45%, according to U.S. Census data — black men's dramatic overrepresentation among those killed by police mirrors a pattern nationwide that has fueled the Black Lives Matter movement.

Black people across the U.S. face hugely disproportionate rates of police violence: According to the Guardian, black people were more than twice as likely to be killed by law enforcement than white people in 2015.

Black people make up 45% of Baton Rouge's population, but 100% of people killed by police since the start of 2015

The two black men killed in Baton Rouge before Sterling were Kevin Bajoie, 32, and Calvin Smith, 22. Bajoie died June 20, 2015 after four officers responded to reports of a fight near Southern University and found him lying on the floor of a nearby home. Bajoie, who was unarmed, allegedly got up and attacked the officers, who then used their stun guns on the 32-year-old.

He died at the hospital soon after. A coroner ruled Bajoie's death "accidental" and caused by drugs — methamphetamine, amphetamine and synthetic marijuana were found in his system — but according to the Guardian, another coroner's official said it was "possible the Taser contributed." Bajoie's family is now suing the Baton Rouge Police Department, saying the officers' use of their stun guns was responsible for his death.

Eight months later, Calvin Smith was shot and killed by police during a gunfight on Feb. 13. Smith reportedly opened fire on officers with an AR-15 rifle and injured one, prompting them to fire back. Smith's mother later told police that her son was mentally ill, suicidal and wanted police to kill him, according to the Advocate. Smith is one of 119 mentally ill people — 24% of the total killed — who have been shot and killed by police so far in 2016, the Washington Post reports.

"They were really aggressive with [Sterling] from the start." — Abdullah Muflahi

On Tuesday, Alton Sterling, a father of five, was selling CDs outside a convenience store when two officers tried to detain him. During a scuffle caught on cell phone video, the officers tackled Sterling to the ground and shot him multiple times while they had him pinned down. Sterling allegedly had a gun in his pocket, but Abdullah Muflahi, the convenience store's clerk and owner who witnessed the incident, claimed he was not reaching for it at the time.

"They were really aggressive with him from the start," Muflahi told the Advocate.

In Louisiana, it is legal for people to carry concealed firearms with a state-issued permit.

Sterling's death has sparked demonstrations in Baton Rouge and outrage on social media. His case is one of many that has generated such a response over the past two years, but little has indicated police are slowing down. The federal government only tracks officer-involved killings using data given to them on a voluntary basis by police departments, but according to the Guardian, 1,146 people were killed by police in the U.S. in 2015, and 558 people have been killed this year so far.

Meanwhile, Sterling is the 114th black person shot and killed by U.S. law enforcement in 2016. Along with Bajoie and Smith, he is one of the three people Baton Rouge police have killed since the start of 2015. All three are black men — suggesting that the Louisiana city is far from immune to the same patterns that define interactions between black communities and police across the country.

The Justice Department has since opened a civil rights investigation into Sterling's death.

The Baton Rouge Police Department did not immediately respond to Mic's request for comment.