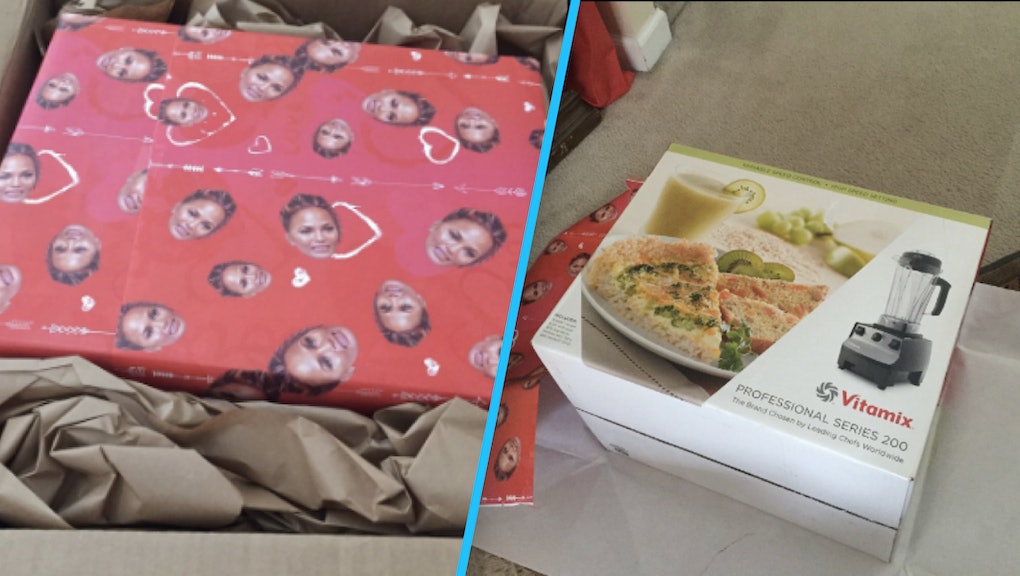 On June 28, 24-year-old Amina Foon, who goes by @DefNotAmina on Twitter, tweeted about an online shopping episode that's happened to the best of us: She went on Amazon to buy something specific and ended up with a totally different item in her shopping cart. In Foon's case, she sought out a blender, but bought Teigen's recently released cookbook Cravings instead.

"Went on Amazon for a blender and ended up buying @chrissyteigen's cookbook," Foon tweeted.

Teigen quickly noticed the tweet and rewarded Foon for her impulse buy.

"Ima send u a blender dm me your address" the supermodel-cookbook author tweeted to Foon just two minutes after the original tweet was posted.

Teigen proved to be a woman of her word. Foon received a FedEx package Wednesday morning from Teigen. It wasn't just any old blender, though.

It was a Vitamix Professional Series 200 Blender wrapped in Teigen's face. The wrapping paper alone is worth major celebration, but the blender is nothing to snuff at: The Vitamix model retails for close to $500 on Amazon.

"I was going to get a $12 one off Amazon cause I'm a broke medical student," Foon told Mic in a direct message on Twitter. "I'm excited to use this blender and take my cooking to the next level."

On whether she believed Teigen was going to follow through, Foon said she "honestly believed [Teigen] would send it. Though some of my friends did express their doubt."

The lesson here? Trust in Chrissy Teigen. And a gift is always better when wrapped with the face of a supermodel.