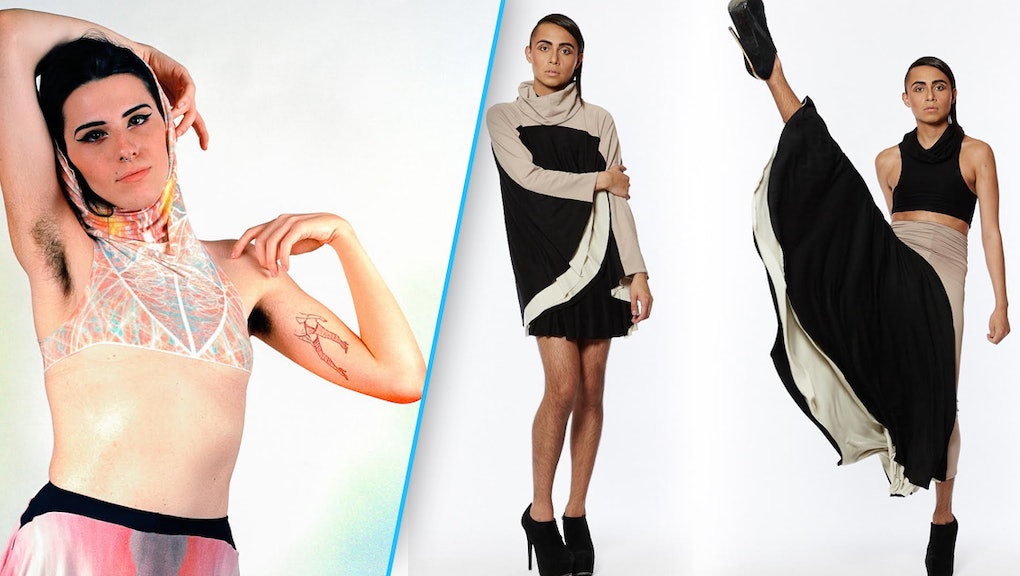 These Designers Are Creating Gender Fluid Fashion That Celebrates All Bodies

Fashion is an industry that, despite it's seemingly symbiotic relationship with queerness — in that the fashion world is full of queer designers, models, stylists, etc. — upholds binary notions of gender as rigorously as the most conservative industries. Clothes are for men or for women, and in some very rare (but exceedingly more common) cases they are unisex. But in 2016, a year in which we've seen transgender models trample over societal ideals of the "perfect" body, shouldn't we be past the gendering of the rags, however beautiful, we put on our body?

This past March, Zara launched their first genderless clothing line, and the results were more than a bit "meh," largely seen as shapeless jeans and sweatshirts designed to hang limply from whatever body might want to fork over the cash for them. To Zara, their idea of genderless fashion was fashion with no identity, which is exactly what fashion isn't. Clothing is one of the loudest ways we can proclaim who we are to the world, and Zara really took the "less" in genderless to heart.

Thankfully, brands like TillyandWilliam are aiming to approach fashion from a perspective of gender fluidity. The brand, created by friends Tilly deWolfe and Tom Barranca in 2009, has become a hallmark of New York City's more enlightened, fashionable gender deviants, those whose clothing celebrates their mercurial natures.

According to deWolfe, the brand sprouted from "a point of questioning why it was so difficult for the two of us to share clothing; our bodies are not so different." The two are both cisgender and queer — deWolfe identifies as female and Barranca as male.

"The conversation contained an urge to get men out of the suit, this constrictive historical symbol of corporatocracy. It evolved into an understanding of dressing all genders and body types, not just two. We began creating new shapes and inventions that just sort of bend to the will of the wearer. It has become a deep study in what happens when you remove the gender binary and restrictiveness of how clothing is supposed to look and be worn, and give the wearer some tools to make those decisions for themselves."

"Our desire is for people to create their own identities, and our clothing is an effort to aid in that process," Barranca explained.

To that end, all of TillyandWilliam's garments are not only made to be worn by every gender, but the clothing itself transforms into different garments depending on the wearers intentions. A shirt can become a dress can become a cape, a convention that is also commentary on fashion's power to transform us into who we choose to be.

"Clothing is a language, fashion is a conversation, and beauty is understood in every dialect," Barranca said. "As humans, we are extremely visual. Everything we see has something to say. I've always seen an outfit as representing a place and time in your life, how you feel underneath all of it, and what it says to the people around you."

As upstarts making a name for themselves in an industry dedicated to rigid structures of gender and identity, the two are more aware than anyone of what fashion is getting right and wrong when it comes to gender. "The fashion industry is, and historically has been, a strict enforcer of the gender binary. From the pressure it places on women to be bodily hairless with a full face of makeup and an impossibly flat tummy, and to constantly feel like the clothing she just bought is going out of style, it creates deep personal insecurities and astronomical amounts of tangible waste," deWolfe explained.

They continued: "It teaches men to stay firmly in the lane of suits, slacks and tees; to tease and enact violence against men who deviate. Thus it creates a vortex of horrors for trans women who want to or may feel pressured to 'pass' according to society's standards of femininity, but are attacked by those who are conditioned to think people born with penises cannot step outside the extremely limited scope of 'menswear.' There are so many nuances of how fashion is failing everyone, save for a few at the very top, so here on the ground, we need to support and hold space for each other."

It's not entirely without transgressors. DeWolfe does cite designers like Rad Hourani's slim-suited, structural approach to androgyny as those who are getting genderless clothing right.

The duo doesn't want to merely point out the industry's shortcomings, but also use its fresh voice and perspective to offer solutions. "Fashion needs to stop putting gender and people into little boxes, segregating the shopping experience into Man here, Woman there," deWolfe said. According to the duo, the outdated sizing system needs to be reimagined so people can find clothes that fit their bodies rather than forcing their bodies to fit into clothes. They'd also like to see the end of mainstream fashion magazines that cater to their advertisers and capitalize on the exploitation of insecurities. "The industry needs be more localized and much slower, so instead of centralized corporations churning out billions of articles of clothing a year, based on the whims of trend forecasters and greed, we can make clothing together that actually serves our own communities.

Unlike Zara, TillyandWilliam are not trying to capitalize on the past year's trans mania in an effort to sell genderless clothing. Why? Because they don't believe in a genderless world. Gender might be complicated, might be painful, might even be a tool of the patriarchy to oppress all of us, but it's also a way that people celebrate what makes them them.

"I think people should be free to express femininity, masculinity and everything in between and beyond, to whatever degree makes their heart sing," deWolfe said. "People don't need to stop making or buying tailored suits or ball gowns if that's what moves them, society just needs to stop policing who wears them. We make clothing the way we do, and invent new clothing because that's what moves us. People already know where to get traditionally masc/femme clothing, we simply are providing another option and a different way to think about clothing."