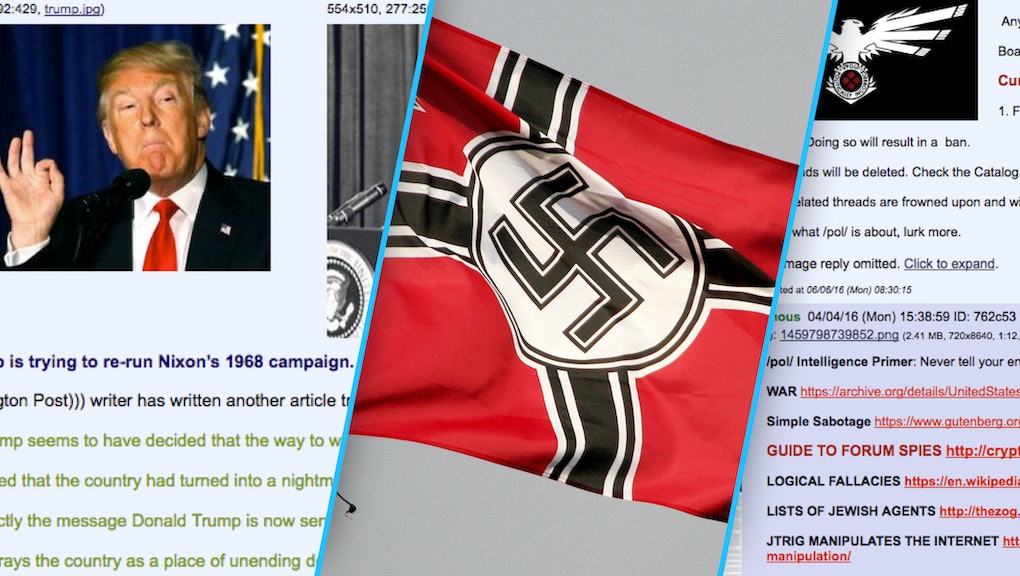 In early July, presumptive Republican presidential nominee Donald Trump tweeted an image of his Democratic counterpart Hillary Clinton. What distinguished this particular post, and outraged many, was its brazen anti-Semitism: The graphic showed Clinton's face over a pile of money, accompanied by an unmistakable Star of David emblazoned with the words "Most Corrupt Candidate Ever!"

Trump's campaign team subsequently deleted the post and replaced it with a modified version with a circle instead of a star. They remained adamant the tweet showed a "sheriff's badge," not the Jewish symbol closely associated with the Holocaust after Nazis forced Jewish prisoners to wear it on their sleeves.

As Mic originally reported, before the image made its appearance on Trump's Twitter, it wove its way through multiple online venues tied to the ideology of white supremacy. One of the venues where the image found a happy home was /pol/, aka "Politically Incorrect," one of the many message boards found on internet free-speech haven 8chan.

8chan's /pol/ is one of the nexuses of the alternative right, the collective digital presence of an edgy new conservative movement. The alt-right is young and internet savvy. In spaces like 8chan's /pol/, young internet trolls break bread with earnest anti-Semitic white supremacists. They denounce political correctness, immigration and cultural diversity while sharing "cuck" memes to mock the establishment.

This is a primer on how and why this central hub of the alt-right came to be. Get ready for some internet history.

To understand /pol/, you have to understand the culture of a "chan" — a variety of mostly anonymous message boards originally popularized by the Japanese site 2channel.

Chans are image boards, rather than the static web forums that became the standard in the United States following the BBS and UseNet boom of the 1980s to late 1990s. One feature of a static message board is that users generally have to register an account to post, and their activity can be tracked throughout the forum's history. Their messages may live on forever. Moreover, these message boards often have moderators who police racist language or abuse.

An image board is different. Users may post anonymously and without registration. The front page is a stream of unfiltered content that changes every time you refresh. Threads live for a short time, then they're archived or deleted.

On an extremely active image board, these features ensure the board remains in a state of perpetual present. The anonymity, impermanence and generally relaxed moderation style attract a particular brand of user.

4chan is the country's most influential image board

The most popular image board with a predominantly U.S. user base is 4chan, which was founded in 2003 for anime enthusiasts. It became particularly infamous among the denizens of other web platforms for its "random" board, /b/. Beyond generating many of the web's most famous memes, enshrining its place as an influential generator of internet culture, /b/ became a favored destination for netizens who wanted to shock and amuse, pull pranks and trade pornography while leaving little trace of their online presence.

For more than a decade, the board has stayed largely the same: an anarchic den of depravity. For example, a /b/ user once had sex with a human skull and posted photos, which then went viral (Google it if you dare). Another /b/tard (as they call themselves) confessed to a murder before surrendering to police in 2014.

Here's where /pol/ comes back in: /pol/ is a 4chan board too, one of its most influential. In theory, it was intended to discuss news and politics, but like any comments section without much moderation, it quickly became an unending slog of bigotry. On a place like /pol/, there's no clear delineation between sincerity, irony and cynicism. A poster who uploads neo-Nazi iconography could be a genuine fascist or a 14-year-old troll attempting to goad other users into a funny response. Either way, the effect is the same: The dial is continually turned to 11.

As /pol/ continued to evolve into a haven for far-right ideology, actual fascist organizations with web presences began to take notice of its potential to recruit a new generation of extremists. The Daily Beast reported that racist conversations on /pol/ — for example, events like the police killing of black teenager Michael Brown or white supremacist Dylann Roof's massacre at a black church in Charleston, South Carolina — influenced the development of sites like neo-Nazi news site the Daily Stormer, which learned "racism is only as effective as the meme that spreads it."

According to Encyclopedia Dramatica, a wiki site that tracks chan culture, fallout over 4chan founder Christopher "moot" Poole's handling of the Gamergate controversy resulted in a large-scale user exodus to 8chan, an image board with even looser rules on moderation. (In 2014, the site contained several pedophile forums, and founder Fredrick Brennan described it as a place bounded only by the requirements of U.S. law.)

8chan's /pol/ forum, which shares the original's name, was suddenly faced with the en-masse arrival of a gleefully offensive, hate-speech-spewing far-right troll horde.

While 4chan's /pol/ is more an agglomeration of casual racists, 8chan's /pol/ seems to be dominated by genuine white supremacists, users who would have felt at home on the recently banned, explicitly racist Reddit communities like /r/coontown.

Virtually all posts on 8chan's /pol/ boast neo-Nazi iconography. The threads are littered with seemingly earnest comments on the inferiority of nonwhites and rants about progressive "social justice warriors." Pinned posts link out to neo-Nazi propaganda about how Jews rule the world. Ethnic slurs are ubiquitous.

One of /pol/'s favorite insults is "cuck." It's a reference to the sexual fetish of cuckoldry, but to white supremacists, it signifies a weak, insufficiently conservative man who's content with nonwhite immigrants invading his home.

When not discussing threats to "real" — meaning "white" — America, some racists on /pol/ fan out to other social networks.

Trump's Star of David image was posted on 8chan's /pol/ roughly a week before it ended up on Trump's Twitter account, stripped of credit. /pol/ was (at minimum) one of two openly racist venues where the graphic circulated in the days preceding its moment in the national spotlight.

In response to Mic's story, Trump campaign social media director Dan Scavino said only that the image was found on Twitter.

If Scavino's claim is true, it's an abrupt departure from Trump's history of retweeting and crediting Twitter users (including many white supremacists) to use their content.

This time, apparently, Trump's team found an offensive image online, possibly altered it, posted it without attribution, deleted and replaced it, then settled on an explanation so paper-thin only the willfully ignorant would believe it. In this, Trump has found a kindred spirit in /pol/. It's a chain of online incoherence that would make any 8chan user proud.