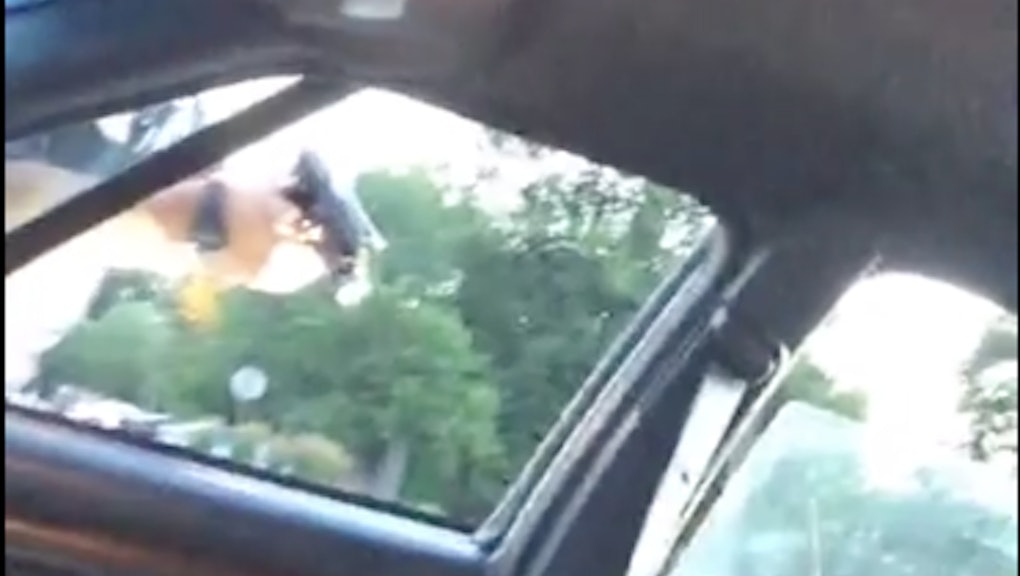 An extremely graphic video posted to Facebook Wednesday night appears to show the bloody, harrowing aftermath of a police shooting in Falcon Heights, Minnesota. In the footage, a black man identified as "Phil" — whose identity was later confirmed by WCCO-CBS Minnesota as 32-year-old Philando Castile — was shot at point-blank range during a routine traffic stop.

The video, which was livestreamed to Facebook by a woman named Diamond "Lavish" Reynolds, opens with Castile, drenched in blood, lying nearly motionless, eyes open and breathing, in the driver's seat of a car. Reynolds, who states in the video that she is Castile's girlfriend, sits next to him in the passenger seat and narrates the events that follow.

"We got pulled over for a busted taillight in the back," Reynolds says in the beginning of the Facebook Live video. "The police just, just ... he's covered."

"He's licensed to carry," Reynolds explains of Castile, "He was trying to get out his ID and his wallet out his pocket, and he let the officer know that he had a firearm, and he was reaching for his wallet, and the officer just shot him in his arm."

"I told him not to reach for it, I told him to get his hands up," an audibly distressed police officer can be heard screaming outside of the car in the video.

"You shot four bullets into him, sir," she continues, "He was just getting his license and registration, sir."

"They killed my boyfriend," she tells the camera.

At this point, an officer instructs Reynolds to leave the vehicle. She complies. An officer is seen ordering Reynolds to get on her knees. It then appears that the camera drops, as the shot abruptly cuts away to show the sky, just before Reynolds announces that the police "threw [her] phone."

Though we no longer see Reynolds, we hear her agonized pleas.

At time of publishing, Reynolds' video of the incident has been either taken down from Facebook or made unavailable to anyone outside of her immediate network of Facebook friends. While it was available, it garnered over a million views and was shared over 32,000 times. [Update: The Facebook video is now back up.]

As news of its existence spread through social media, users took Twitter to express their grief and indignation over the contents of Reynolds' video.

According to Jennifer Mayerle, a reporter with WCCO, Castile was pronounced dead at Hennepin County Medical Center.

According to WCCO, Reynolds is in police custody as of early Thursday.

Castile's death took place just one day after graphic video captured the killing of Alton Sterling, a black man in Baton Rouge, at the hands of police. Sterling was selling CDs outside of a convenience store before law enforcement killed him.