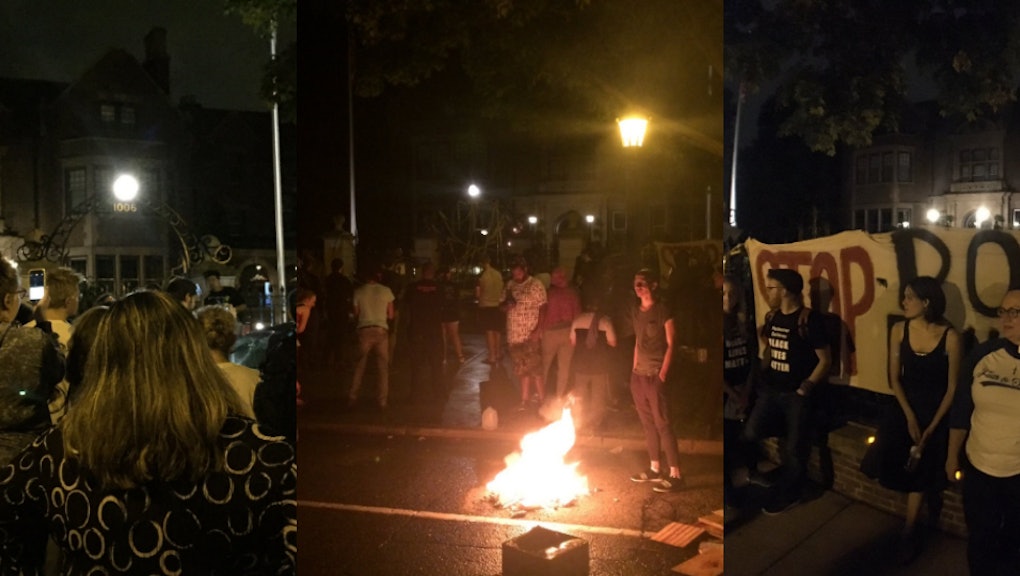 As the country still reels from the death of Alton Sterling, protesters are demanding justice for Philando Castile, the black man who died in the hospital Wednesday night after he was shot by police in Falcon Heights, Minnesota, during a traffic stop.

The aftermath of Castile's shooting was captured in a disturbing video and shared on Facebook by his girlfriend, Lavish Reynolds. The video was pulled from Facebook and then re-released with a graphic warning label, according to CNN. It's been viewed more than 2 million times.

In the hours following the shooting, crowds gathered around the spot where Castile was shot, according to KMSP reporter Ted Haller. Onlookers reportedly chanted "murderer" as the car was pulled away.

Protesters marched from the scene of the shooting to the home of Minnesota Governor Mark Dayton, where they demanded the governor give a statement on Castile's death, according to KMSP.

In the street outside the governor's mansion, protesters chanted Castile's name and yelled for Dayton to "wake up."

They also wrapped the gates around Dayton's home in crime scene tape.

The outrage over the death of Castile — at least the 115th known black man killed by police in 2016 — spread far beyond the streets of Falcon Heights. His family is "devastated," according to CNN.

"We all know my nephew was a good kid and we want justice as well as relief," Castile's uncle, Clarence Castile, told CNN.

"My nephew has a (concealed carry) permit, and still got killed for carrying a gun ... this needs to stop," he said. "This happens so often."

A smaller group of protesters was still demonstrating outside the Governor's Mansion around 6 a.m. Thursday morning, according to KSTP-TV reporter Brett Hoffland.