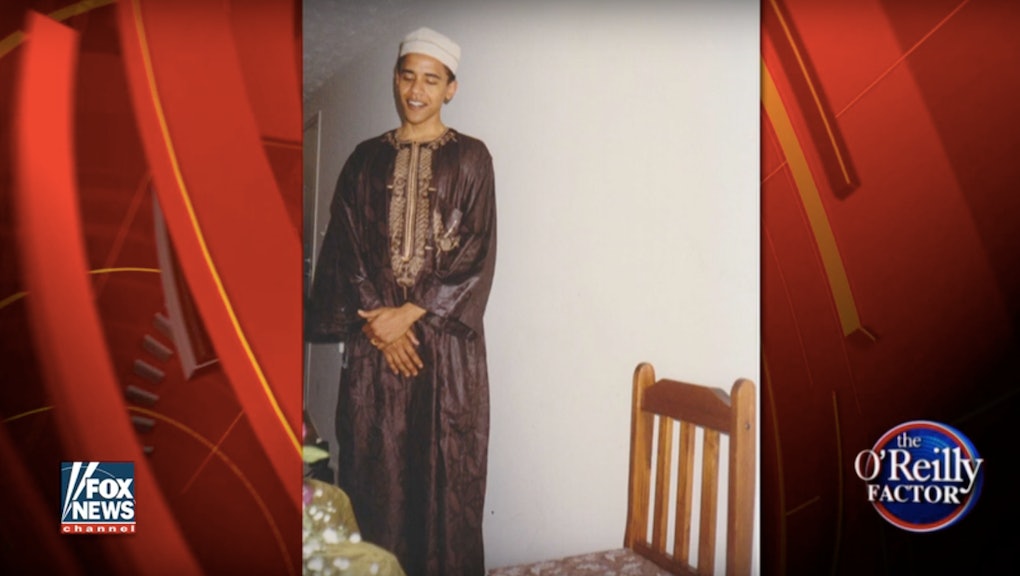 On Wednesday, Fox News host Bill O'Reilly attempted to make a bizarre connection to a photo of President Obama at a Muslim wedding.

O'Reilly condemns Obama for not using the term "radical Islam," and then suggests that it's because he still has an emotional attachment to "the Muslim world." The remarks come in response to Obama's announcement of keeping over 8,000 U.S. troops on the ground in Afghanistan.

"[The Taliban] are Islamic-driven killers who protected al-Qaeda before the 9/11 attack," O'Reilly said. "Yet the president of the United States does not define the terror issue clearly."

O'Reilly then refers to Obama's Muslim-turned-atheist father and his exposure to Muslim culture as an impetus for his alleged emotional attachment to Islam:

"Here's why: Barack Obama's father, who abandoned his family, was a Muslim who eventually turned atheist. Then his mother married another Muslim, moving young Barry to Indonesia, where he was exposed to the Islamic world even though he did attend a Catholic school in first grade. According to his half-sister, Barack Obama attended his half-brother's wedding in the early 1990s. Malik Obama was a Muslim. The Factor has obtained pictures allegedly from that wedding, which we believe was held in Maryland."

"Details on the ceremony, the exact location, whether the reports that Barack Obama was the best man are very difficult to verify at this point," O'Reilly added. "What we can tell you with certainty is that Barack Obama has deep emotional ties to Islam."

When discussing Obama's "deep emotional ties to Islam," the conservative talk show host implies that the president is weak on combatting terrorist groups like ISIS and the Taliban. This couldn't be farther from the truth.

O'Reilly avoids discussing Obama's controversial drone warfare program in several Muslim-majority countries. The drone program intends to kill terrorists abroad, but the government's definition of a terrorist is so vague that numerous civilians have been targeted and/or killed.

In an effort to combat homegrown extremism, Obama also established several programs like the Countering Violent Extremism summit. Several civil rights organizations, like the American Civil Liberties Union, and Muslim advocacy groups have blasted CVE for singling out American Muslims for extremism, increased policing and its overreaching surveillance on the community.

O'Reilly joins a long list of Republican politicians, like presumptive GOP nominee Donald Trump, who have criticized Obama for his sparing use of the term "radical Islam."

On June 14, Obama delivered a powerful response to these criticisms and claims that ISIS can't be defeated unless they're called "radical Islamists." The response came a few days after the mass shooting at an Orlando, Florida, nightclub.

"What exactly would it change? Obama said. "Would it make ISIL less committed to trying to kill Americans? Would it bring in more allies? Is there a military strategy that is served by this? The answer is none of the above. Calling a threat by a different name does not make it go away. This is a political distraction."

Obama said that using a blanket term like "radical Islam" will empower terrorists since it's suggesting that the U.S. is at war with an entire faith.