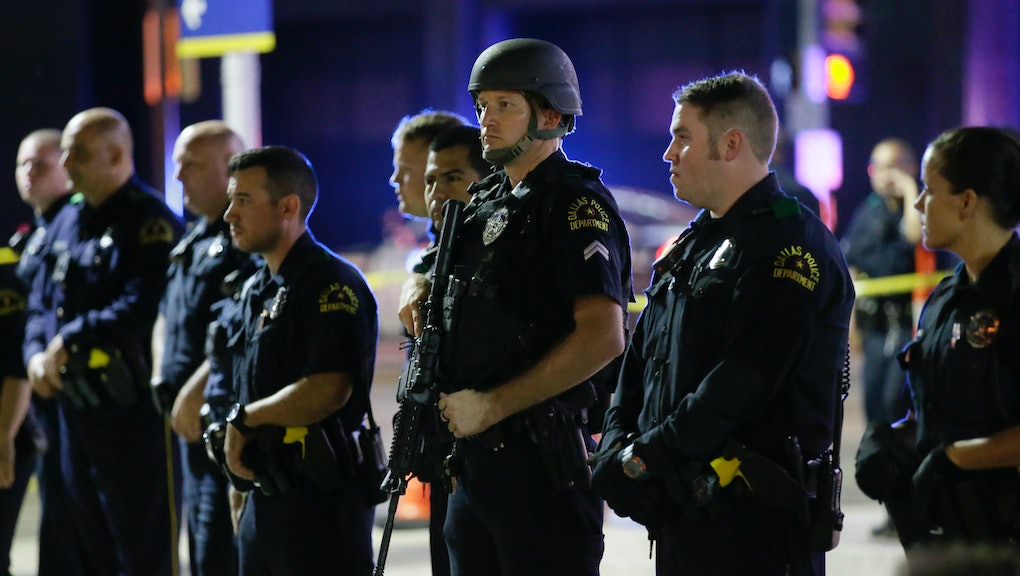 Dallas Police Shooting: Here's Everything You Need to Know

A peaceful protest in Dallas turned to terror Thursday evening when at least one sniper, and potentially as many as four, opened fire on the crowd — shooting a total of 12 police officers, killing five and wounding two civilians.

The night began as a nonviolent gathering of Black Lives Matters activists to protest the police killings of Alton Sterling and Philando Castile earlier this week. The march was reportedly so peaceful, in fact, members of the Dallas Police Department were tweeting out smiling photos taken with protesters.

At 8:45 p.m. local time, gunfire rang out, sending protesters running. The Associated Press reported that "live TV video showed protesters marching along a street in downtown when the shots erupted and the crowd scattered, seeking cover."

Four Dallas police officers and one Dallas Area Rapid Transit officer were killed. According to local police, the attack was "carefully planned and executed," Reuters reported.

Three suspects were taken into custody, Reuters reported, and a fourth was killed when police detonated a bomb transported by a robot during a standoff that lasted well into Friday. Reports initially suggested the suspect was killed by a "self-inflicted gunshot wound," but, in a press conference Friday morning, Dallas Police Chief David Brown said that was not the case.

Motives for the massacre are still unclear, but Brown said the suspect, who was engaged in a standoff with officers reportedly, had said he "wanted to kill white people, especially white officers" adding that "he was upset about the Black Lives Matter issue, and was upset about recent police shootings."

Brown also said the suspect "said he was not affiliated with any groups, he stated that he did this alone." It's not yet clear if the other suspects in police custody are also involved.

The violence, seemingly targeted at police officers, prompted some on social media to point fingers — former Illinois Congressman Joe Walsh even tweeted what seemed to be a thinly veiled death threat at President Barack Obama.

But many condemned the violence and loss of life. In a statement early Friday morning, Obama spoke from Warsaw, Poland, saying, "I think I speak for every single American when I say we are horrified by these events ... Let's be clear: There is no possible justification for these attacks or any violence to law enforcement."