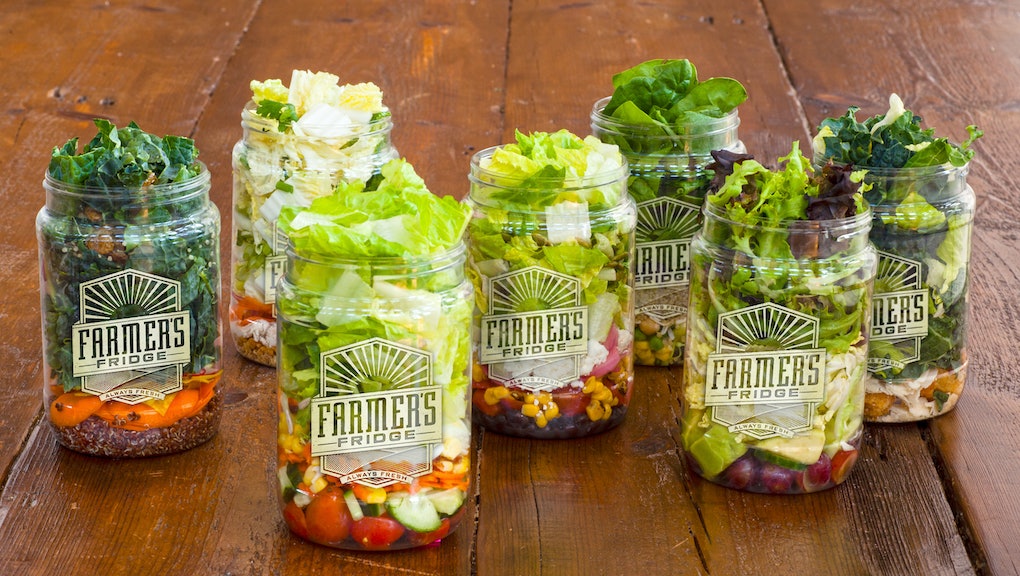 Vending machines are a convenient way to get a snack when hunger strikes. But what if you could choose something healthier than candy and soda? One inventive entrepreneur is changing the vending machine game by offering consumers affordable salads and other healthy snacks.

Founded by Luke Saunders, a former salesman who was tired of eating unhealthy foods on the road, Farmer's Fridge stocks healthy vending machines in over 40 locations around Chicago. Every fridge is filled with handcrafted salads and snacks by 10 a.m. each weekday, Saunders said in an email.

"Imagine a vending machine where you're reaching into a garden," Sherry Steele, General Manager at Fitness Formula Clubs in Chicago, told Farmer's Fridge. But this isn't some overgrown garden full of weeds and nasty bugs. It's a gorgeous, wood-paneled oasis of veggies. Better yet, each Farmer's Fridge kiosk is made of recycled materials including reclaimed wood.

"Imagine a vending machine where you're reaching into a garden"

But really, check out how gorgeous these salads look. This is the special July salad featuring in-season produce.

This Mint and Pea Radish Salad that was featured in June also looks super delicious.

"When we launched Farmer's Fridge, we wondered if people would be able to overcome the idea of buying fresh food in a refrigerated kiosk," he said. Luckily, people have.

Farmer's Fridge has a 4.5 rating on Yelp and business is booming. Saunders said they are adding 30 more locations around the Chicago area, which will increase the size of the company by 75%, in the next 90 days.

Customers of Farmer's Fridge can score a healthy snack for less than a pricey salad at a sit-down restaurant. Saunders noted that most products cost between 20% to 60% less than premium healthy concept restaurants. Salads typically weigh one pound and cost from $5 to $12.

Unsold salads are donated to Zero Percent, an organization that gives healthy food to local community centers and homeless shelters.

Want one of these awesome fridges to come to your office or school? Saunders said you can put a request in at farmersfridge.com. The company will consider every request as it attempts to expand to 5,000 kiosks in the next five years.