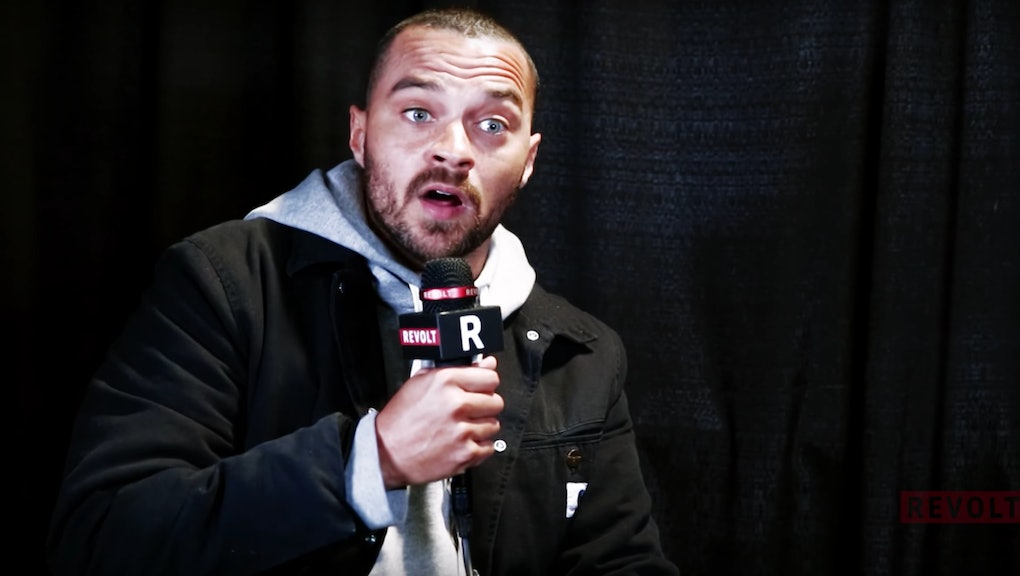 Jesse Williams is no stranger to dropping a mic about what it means to be black in America. And now, he's gone even further, explaining police brutality and the Flint water crisis and how they relate to anti-blackness in America.

In a video for Revolt TV, Williams talks about state sponsored violence and anti-blackness, which he says has "always been here since the advent of this country." Williams links environmental racism to America's police brutality epidemic, as well.

"You can always make an excuse like, 'Oh, it just so happened to be Flint,' but it's the same with black bodies in the streets, with cops shooting people down that are unarmed," he says.

Williams said that the people who are neglected by the government, or worse, killed, are often marginalized people. He said, "Who do you bully if you're a bully? You don't bully a big kid. You bully someone who's probably not going to clap back at you."

Williams said that the movement around Black Lives Matter is about demanding respect that is due to communities who have been disrespected by a government that's supposed to keep them safe.

The problem, Williams said, was that there may be a fundamental lack of caring for black lives.

"If I kill somebody in the street, am I probably going to go to court and face penalty? Why, if I have on a blue shirt and have a government-issued gun, can I get away with murder, by and large?" he said. "Is that fair?"

Williams then goes on to point out that these are basic American rights.

He added, "It's one thing to be ignored, it's another thing to be neglected, it's another thing to be poisoned with a well-known neurotoxin," Williams says of the Flint water crisis. Williams says that the only reason Americans are having this conversation is because government officials got caught poisoning water, just as video of police officers mistreating black citizens is why there is a national conversation about black lives.

Williams closes his comment by linking American anti-blackness to anti-blackness in film and media. He lashed out against film studios that produce films about Africa with white leads, saying that erasing black people from their own histories is a form of violence that depreciates black contributions to history. When films like Gods of Egypt, which removed black people from Egypt in favor of white actors, takes black people out of their narratives, this dehumanizes them and makes it easier for us to care about them less.

This week, as the national conversation about black lives was reignited by the deaths of Alton Sterling and Philando Castile, Williams' remarks resonate even deeper.