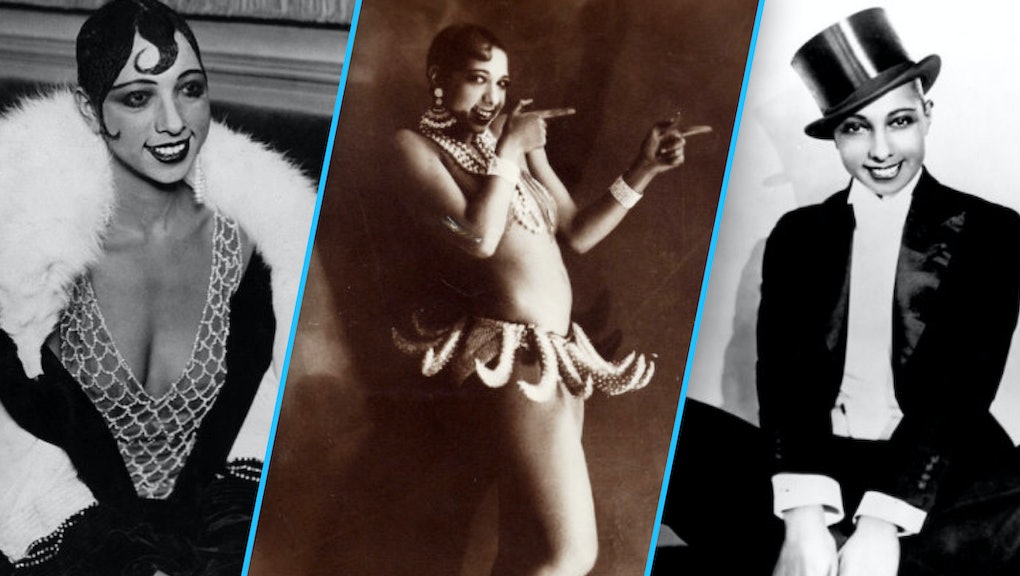 In the 1920s and '30s, Baker was a hugely successful dancer, actress and comedian who was slinking and shaking her way through Paris and Harlem nightclubs.

By the 1940s, she'd become a socialite, a status that helped her own quest to help France during World War II, when she was not only a correspondent to the French Military smuggling Jewish refugees, but a sub-lieutenant in the Women's Auxiliary Air Force.

By the 1950s and '60s, she was a civil rights activist, working with the NAACP to rally against police brutality and racism, and speaking alongside Martin Luther King, Jr. at the March on Washington.

Undoubtedly, she lived a life that left an impact on a wide swath of communities, but what she is perhaps less known for is her impact on fashion. Throughout her career in the United States and France, she unwittingly became a pioneering style icon, introducing many garments and trends that we still see to this day. In that sense, she is truly unsung.

Here are just six instances of Baker being far ahead of the style curve then and even now.

In Paris in the summer of 1926, Baker swiveled her hips onstage at Folies Bergère wearing a skirt constructed of bejeweled, rubber bananas. It hit far above her knee. It rode low on her hips. Baker was wearing a miniskirt nearly 40 years before the word "miniskirt" had been coined by Mary Quant in the early 1960s.

As with many of the trends Baker launched into popularity, she was far ahead of her time.

Much like the miniskirt most of us are familiar with today, Baker's skirt and performance wasn't without its own political message. As Vogue put it at the time, "there was a much deeper and disturbing fascination with the widely accepted belief in black people's inherent primitiveness."

"When she swung onstage in that fiercely swinging banana skirt in 1926," Vogue wrote, "Baker brilliantly manipulated the white male imagination. Crossing her eyes, waving her arms, swaying her hips, poking out her backside, she clowned and seduced and subverted stereotypes."

By subverting stereotypes of African people, she was able to find massive success. One year after that performance, she was one of the highest-paid performers in Europe. In 2006, Beyoncé paid tribute to Baker's power and pro-African legacy at the Fashion Rocks Concert, wearing a bejeweled bra and skirt crafted with yellow satin bananas.

She brought extravagant, attention-grabbing fashion to the stage.

When Baker was onstage shaking and gyrating about, she wanted to be seen. To ensure this, she wore distracting — but still rather marvelous — costumes and clothing. We're talking feathers and ruffles and sparkle; she wanted all eyes on her and her sky-high headdress.

In the decades since, performers around the world have taken note, with women like Cher, Diana Ross, Lady Gaga and Aretha Franklin routinely opting for head-turning outfits. For Baker, it certainly worked — and for the others? Well, yeah, it worked too.

She had a famous pet way before it was cool.

Chrissy Teigen has Puddy; Paris Hilton had Tinkerbell; Michael Jackson had his monkey, Bubbles; George Clooney had a pig named Max — and Josephine Baker had a cheetah named Chiquita.

In 1931, Chiquita made her debut with Baker in a photoshoot, in which Baker wore a satin dress with cheetah-print accents. Later, Chiquita was regularly seen walking to shows with Baker. She also wore a diamond-encrusted collar.

It is a well-known fact that, right now, Rihanna loves her some nipple-baring fashion. In her video for "Bitch Better Have My Money," she wore a clear latex minidress. And of course, at the 2014 CFDA Awards, she wore a dress made entirely of Swarovski crystals, effectively sending the world into a straight-up tizzy. But what many didn't notice at the time was that that look was basically an homage to Josephine Baker, see-through dress, fur stole and all.

Ninety years before Riri's red carpet moment, Baker was readily embracing the provocative nipple-baring look. At many of her shows in Paris, she wore dresses that allowed for her breasts to be entirely exposed, or framed by crystals.

In the 1920s and '30s, Baker's hair was most commonly seen gelled all the way down, with certain strands shellacked into curly-Qs on her forehead. It was a look that was all her own, but since her death in 1975, designers and performers alike have taken notice.

On the Spring 2011 Prada runway and Marc Jacobs' Fall 2016 runway (to name a few), models walked down the catwalk with their hair slicked all the way down, and gelled into waves a la Baker. For an even more recent example, there's singer FKA Twigs, who often wears her hair gelled down with baby hairs worn like an accessory.

She adopted gender-free fashion more than 75 years before its time.

Sure, actress Marlene Dietrich is widely credited for making a woman in a tuxedo sexy, but in 1933 (three years after Dietrich famously wore a top hat), Baker one-upped her. Although her career had been built on an empire of feather headdresses and nipple-baring ensembles, Baker took a swing at gender-free fashion way back when.

And more than 75 years later, her legacy lives on in figures like designer Shayne Oliver, who told W magazine, "Design-wise, I don't have any boundaries when it comes to gender." It also lives on in Jaden Smith, who is doing his part to normalize men in skirts. But to bring it back to the ladies, since Baker slipped on a suit, women in the spotlight haven't shied away one bit, with figures as famous as Oprah Winfrey and Angelina Jolie regularly wearing suits to high-profile events.

As you can see now, Baker remains one of the most influential characters in history, whether it be in the worlds of comedy, dance, social activism or, most definitely, fashion.

Without her, the world would certainly be a much more boring place.