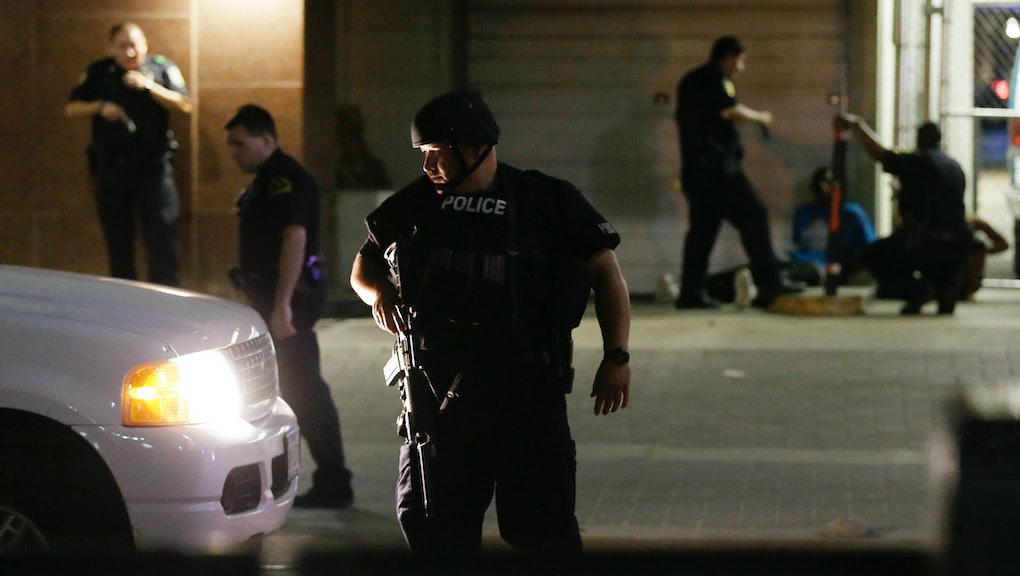 In the wake of a mass shooting at a peaceful Black Lives Matter protest in Dallas that killed five officers and wounded nine others, an old and ugly canard has made its way back into the airwaves: There's a war on police.

National Association of Police Organizations executive director William Johnson, for example, told Fox News that President Barack Obama's "continued appeasements at the federal level with the Department of Justice, their appeasement of violent criminals, their refusal to condemn movements like Black Lives Matter, actively calling for the death of police officers, that type of thing, all the while blaming police for the problems in this country has led directly to the climate that has made Dallas possible," according to Politico.

"It's the war on cops. And the Obama administration is the Neville Chamberlain of this war."

There's just one problem with this idea: It's demonstrably untrue. The number of police killed under each presidency has been steadily falling since at least the Reagan administration, and Obama's tenure has seen the lowest levels yet, according to data compiled by the Washington Post's Wonkblog:

"Under Obama, the average number of police intentionally killed each year has fallen to its lowest level yet — an average of 62 deaths annually through 2015," Wonkblog's Christopher Ingraham wrote. "If you include the 2016 police officer shootings year-to-date and project it out to a full year, that average of 62 deaths doesn't change."

While shootings of officers are indeed up over last year, Ingraham noted, the number remains mostly consistent over the past 10 years. The number of nonfatal incidents involving an assault of some kind on an officer has fallen from 15.9 assaults per 100 police annually in 1988 to 9 per 100, a more than 40% decrease.

Some in the law enforcement community like Chicago police union president Dean Angelo Sr. have instead pointed the finger at "disrespect" of police officers. But disrespecting police isn't illegal; assaulting or killing them is, and the statistics are clear that particular problem is declining.

The existence of a "war on police" is far from the only misinformation about the Obama administration's relationship with authorities to gain credence with the chief executive's political opponents. In 2014, Politifact responded to a meme saying Obama had given "no special recognition" to law enforcement by pointing out the many times Obama had spoken of the importance of good policing and honored fallen officers.

Challenging the notion there is a war against the nation's police is important for bigger reasons than the political fates of the Obama administration. As the Post's Radley Balko wrote in September, "When cops are constantly told that they're under constant fire, or that every interaction with a citizen could be their last, or that they're fortunate each time they come home from the job in one piece, it's absolute poison for police-community relations." In an era when police are routinely given military-grade weaponry and equipment to patrol the nation's streets, the rhetoric of a war on police also gives more excuses for law enforcement to deploy that military hardware on U.S citizens.

Then there's the implication of the term "war on police," namely that such a war has two sides. Police would be one, but who's on the other? In an era where some influential conservatives like radio host Rush Limbaugh have been suggesting Black Lives Matter is a terrorist organization, it's not much of a logical leap to suggest the unspoken fear is that this war on police is actually a race war.