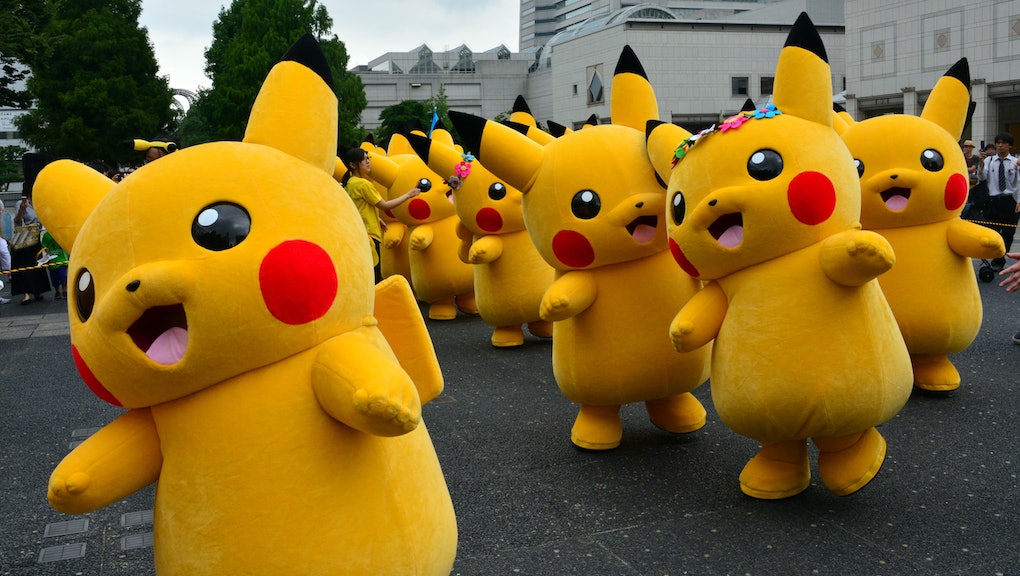 In the short time Pokémon Go has spent as reigning king of all things pop culture, it's caused a few problems its creators probably didn't anticipate. Distracted gamers, their eyes glued to their cell phones, are injuring themselves; states are already readying themselves for the inevitable bout of Pokémon-related collisions; a dastardly few have used the device to trap and rob players; one teenager even stumbled upon a corpse.

But it's also has one unexpected and very positive side effect with players attesting to the game's many mental health benefits.

Pokémon Go requires players looking to snag Snorlaxes, Jigglypuffs, Pikachus and the like to venture outside — and, as indicated by the game's explosive popularity, getting out into the world is something people are eager to do. It's welcome motivation for people who perhaps otherwise wouldn't be inclined to leave the house and interact with strangers. But they're doing it. And more importantly, they're enjoying it.

"Real talk," @uglycatlady tweeted Sunday. "As someone with anxiety/depression, the fact that I've spent most of this weekend outside with friends is unreal."

@uglycatlady's sentiment was echoed by a slew of other gamers, one of whom said it provided her "purpose and reason to go outside at last."

Considering Pokémon Go's user base is about to surpass that of Twitter, at least among Android users, the potential for the game as a form of therapy for those living with depression, social anxiety, agoraphobia and similar mental health disorders would appear to be substantial.

"The developers behind Pokémon Go didn't mean to create a mental health gaming app," psychologist John M. Grobol wrote for his site, PsychCentral. "But they've done so, and the effects seem to be largely positive."

Grobol cites the positive effect of exercise for people with depression, who have the hardest times motivating themselves to be active. "For a person suffering from depression or another mood disorder, the idea of exercise can be nearly impossible to contemplate, much less do," he wrote. "For someone suffering from social anxiety, the idea of going outside and possibly bumping into others that may want to talk to you is daunting."

But by involving these people in a game, Pokémon Go has incentivized physical activity and social participation, making a trip outdoors seem like a fun prospect, rather than frightening one. As one player told BuzzFeed:

I think it's partially because it gives an instant reward. It's not like going out, having an awful experience and getting praise after. It's going out and getting that instant positive affirmation that makes going outside a good experience. I guess most people get that with being social or doing other activities.

And indeed, research has suggested that event a 10-minute walk can have a measurable, positive effect on mood. One study found that people who strolled through natural landscape for 90 minutes reduced activities in the areas of the brain associated with mental illness. Then there's the fact that exercise prompts the body to release endorphins, which in turn reduces stress and can help alleviate mild to moderate depression.

Given internet testimony that the app requires users to exert more energy than they maybe anticipated, it would make sense that players are feeling a mental health boost from running all over in hot pursuit of Pokémon.

Another user told BuzzFeed that the app eliminated their fear of rejection: Because seemingly everyone has Pokéfever right now, there was a greater sense of community in her small town, which made her feel more comfortable talking to strangers. It's exactly that kind of "low-risk" collaborative interaction that can make multiplayer games a solid answer to social anxiety — and Pokémon Go is certainly multiplayer.

But even as it brings people together, user testimonial also indicates it's tearing some relationships apart — the concept of a Pokémon Go widow or widower has already entered pop culture consciousness.

And it's reportedly also an adequate replacement for Tinder, an app it's already outpaced in terms of popularity. So for those whose significant others have left them in order to pursue Pikachu, love — along with acceptance and that dead body — remains one of the many things to be found with Pokémon Go.