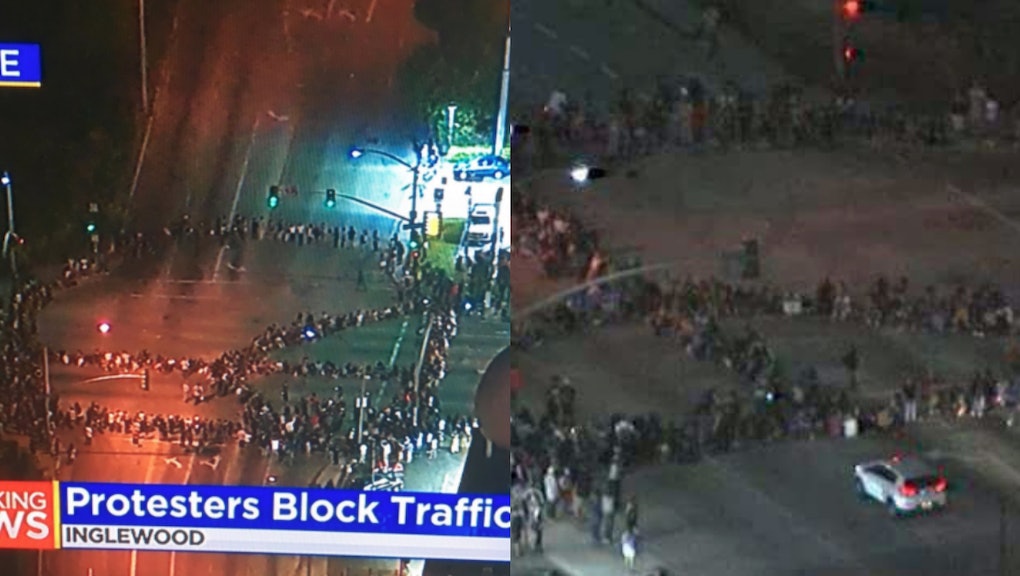 The deaths of Alton Sterling and Philando Castile, both shot and killed by police last week, have sparked peaceful Black Lives Matter protests around the country.

Perhaps nowhere has the movement's message of peace been more palpable than in Inglewood, California, a city southwest of Los Angeles, last night.

Hundreds of protesters took to the streets of the southern California city, where they blocked the 405 Freeway at Manchester Avenue before being vacated by police, according to CBS Los Angeles. From there, they reportedly demonstrated on the La Cienega Boulevard on-ramp, then returned to a spot on Manchester Avenue near Randy's Donuts.

There, protesters did something incredible: They arranged themselves to form a giant peace sign in the middle of the street.

"We're here tonight because several things have been transpiring in the news and a lot of times we just sit on social media and complain about it," protester Angelo Valentin told CBSLA. "It's time to step up and do some action."

Photos and videos of the powerful demonstration were shared on Twitter.

Inglewood mayor James Butts Jr. reportedly expected "a meeting of about 25 members of the Black Lives Matter group" — and was surprised to see 1,000 protesters turn up.

"We routed Forum traffic south on Prairie, east on Manchester and we determined that we would let them occupy the intersection to make their statement and have a peaceful resolution," the mayor said, according to CBSLA.

Unlike in other U.S. cities, no protesters in Inglewood were arrested.