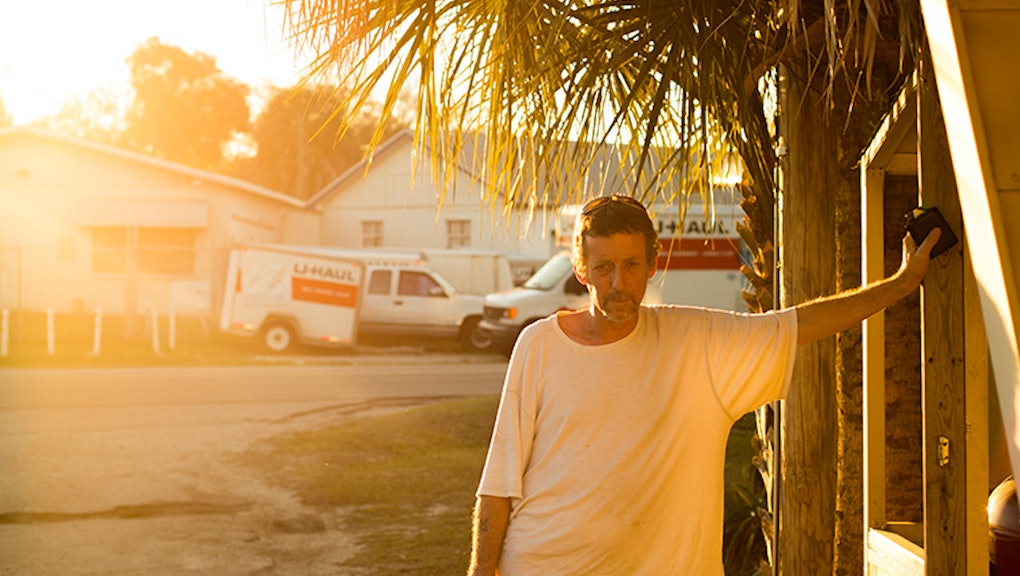 When Jamie Turner was 22 years old, his life was in the process of unraveling. His girlfriend had broken up with him. His father had relocated to Kuwait. He was unemployed and saddled with student debt from his master's program in film studies. So he decided to "do something stupid," he said in a phone interview. He didn't realize at the time just how stupid it was.

Turner went on Craigslist and replied to an ad for sex with a 30-year-old woman — who then tried to convince him to have sex with her 14-year-old daughter. She kept "pushing," Turner said, and when he arrived at her house he was arrested in a massive police sting. Even though he had never touched an underage girl, he was sentenced to a year and a day in prison and three years of probation, as well as a permanent spot on the sex offender registry.

When he was released from prison in 2013, he found he was homeless and had nowhere to live. Then he heard about the Palace Mobile Home Park, a trailer park for convicted offenders.

"It was me with a backpack of things that my mom brought me. She dropped me off and she's crying when she sees the place," he said. "It's kind of frightening. It's kind of like going to prison again, because everything's so uncertain." But for Turner, it was home for more than two years.

The Palace Mobile Home Park, which houses about 120 sex offenders, is known casually as Pervert Park. It's somewhere between a halfway house and a trailer park community for convicted sex offenders, whose crimes range widely from the arguably innocuous, as in Turner's case, to the rape of a child. Pervert Park is also the subject of a new, eponymous documentary by the Danish filmmakers Frida and Lasse Barkfors, who made the film to shine a light on the rigid laws governing sex offenders in the United States.

"The span of crimes is very, very wide and diverse," Frida said in a phone interview. "There are people in the park who have urinated in public while drunk. There's a person who kidnapped a 5-year-old girl, raped her and left her in the desert. We wanted to show the diversity [of the sex offender] label."

Indeed, the film showcases the harrowing spectrum of people who are saddled with the inexorable, often life-ruining label of sex offender. There's the story of Turner, who is largely portrayed as a hapless victim of circumstance, unjustly enmeshed in a police sting. And then there are the tales of people like Patrick, the aforementioned child rapist, and Tracy, who alleges she was sexually abused by her father as a child and went on to abuse her son as an adult.

It's easy to feel for even the most abhorrent figures in the film — and that's precisely the point, said Frida. "You can feel empathy and feel sympathy at the same time as you despise their crimes," she said. "You can't just write them off. We saw the people behind the crimes."

Currently, there are more than 851,000 registered sex offenders in the United States — up from about 600,000 in 2008, according to the National Center for Missing and Exploited Children. In Florida in particular, where Turner was arrested, the number of registered sex offenders has increased by 74%, in part due to law enforcement officials' aggressiveness in orchestrating such stings.

The laws governing sex offenders range widely from state to state. But in Florida, where Pervert Park takes place, convicted sex offenders cannot live within 1000 feet of a "school, day care center, park or playground," and some places in Florida place that limit as far as 2500 feet. This severely limits where they can find a home. That's why Nancy Morais, the mother of a convicted sex offender, founded the organization behind the park, Florida Justice Transitions, so her son could get back on his feet after being released from prison.

The trailer park offers sex offenders the opportunity to live there for $400 a month, with a few roommates per trailer. Through weekly therapy sessions, the residents are encouraged to share their deepest fantasies and desires with their fellow residents, which naturally creates a sense of camaraderie. "I didn't really care what anyone's charges were," Turner said. "I'd get catcalled sometimes because I look young, but for the most part, people were really nice."

The Palace Mobile Home Park isn't without controversy: the media has referred to the park as a "paradise for sex offenders," and the police presence there is heightened, which resulted in a sting that got eight of the park's residents, including Turner, arrested last year. (He had a photograph of a 28-year-old woman's breasts on his computer, violating the terms of his probation, which require abstinence from sexually explicit content.)

Yet for the most part, the park — and the therapy sessions offered therein — are depicted in the film as beneficial to its residents, who are desperately trying to rebuild their lives and battle with the stigma of being permanently labeled sex offenders.

Pervert Park shines a light on the lives of these embattled individuals, and gives viewers a chance to reassess how we treat sex offenders in our society.

"A sex crime is not something that just happens. There's a lifetime of circumstances that lead up to that moment," Turner, who left the park a month ago and is still struggling to find a job, said. "[Viewers of the film] should really pay attention to these people's stories and know that these people have really suffered. To see that these are human beings."

While some of the stories may be harrowing, giving these formerly voiceless men and women a voice is crucial toward building our understanding of why people commit the crimes they do, and how we can rehabilitate them — or, given the proper treatment, prevent them from becoming offenders in the first place.

So far, the reception from both sex offender law reform groups and victims' rights groups has been uniformly positive, Frida said. "If we don't talk about it, we don't help the victims," she said. "It's crucial to help people to heal that we talk about it."