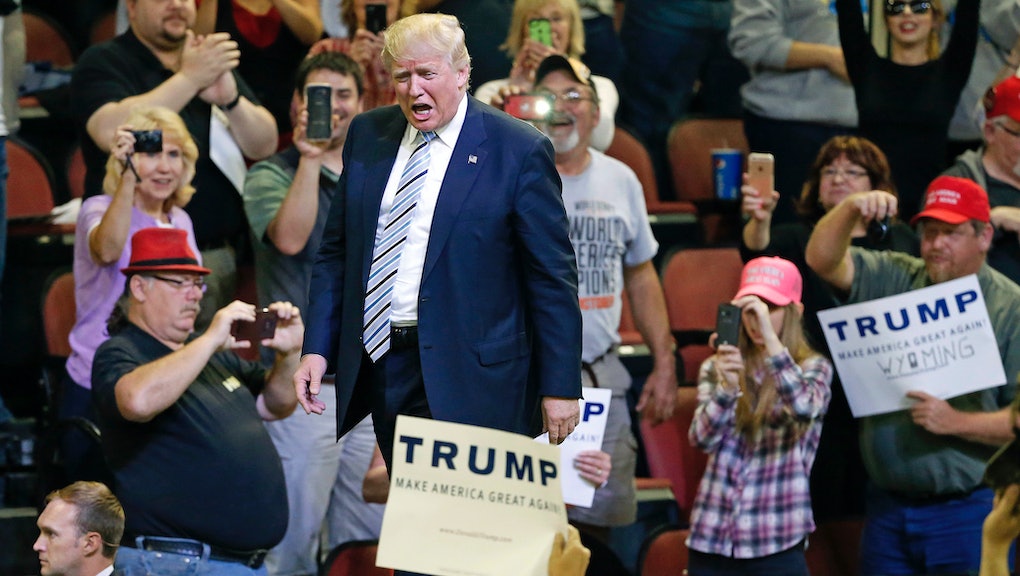 Could Donald Trump Actually Win? Here Are 4 Ways How

Trailing Hillary Clinton in the polls and beset by perpetual controversy on topics from his business record to his campaign's use of an image that originated on an anti-Semitic message board, Donald Trump is a decided underdog heading into the general election.

But Trump has defied the received wisdom before: When he entered the presidential race in June 2015, the New York Times pronounced itself "stumped" as to how he could claim the Republican nomination — "and we really tried," the Times assured readers.

It's far from inconceivable that he could confound the prognosticators once more. Even after a particularly brutal stretch for his campaign, he's within five percentage points of Clinton in national polls — and surveys show an even closer race in the swing states that will ultimately pick the country's 45th president.

Here are four ways Trump can close the gap.

Keep the focus on Clinton

Both presumptive nominees are historically unpopular candidates: According to polling compiled by RealClearPolitics, only 34% of Americans view Trump favorably, while 61% see him unfavorably. Clinton's numbers are better, but only by a bit: 40% of Americans see her in a favorable light, while 55% take a negative view.

FBI Director James Comey's scathing criticism of Clinton's "extremely careless" handling of classified information as secretary of state reinforces doubts about her honesty and trustworthiness, providing ample fodder for Trump. According to a late June poll from Fox News, only 30% of voters see her as honest and trustworthy, while 58% describe her as corrupt. While only 34% said Trump was honest and trustworthy, the portion of voters viewing him as corrupt — 45% — was considerably lower than for Clinton.

What's more, voters may prove receptive to Trump's attack on a "totally rigged" system following the FBI's decision not to recommend charges against Clinton: According to an ABC News/Washington Post poll released Monday, voters disapproved of the FBI's recommendation by a 56% to 35% margin.

But with Clinton targeting Trump's incendiary remarks about women, immigrants and Mexicans, she's working assiduously to keep the focus squarely on the brash billionaire. And Trump himself has often done Clinton's work for her, often using his campaign as a platform to air his personal grievances — for instance, attacking the Mexican heritage of the judge overseeing the federal lawsuit against Trump University — and that casts doubt on whether he'll show the discipline necessary to train the spotlight on Clinton.

Stick to populist themes on trade

Given Clinton's history of waffling on free trade agreements — including the Trans-Pacific Partnership, which she championed as secretary of state — Trump's populist critique of such pacts may pack an extra punch in Rust Belt states, where polls show he's within striking distance.

According to polling averages from RealClearPolitics, Clinton edges Trump by just 2.5 points in Ohio and 2.3 points in Pennsylvania, while the most recent poll out of Michigan shows just a four-point Clinton lead.

While Clinton has earned the endorsement of the AFL-CIO, union officials have expressed worries that Trump's "America First" message on jobs and trade is resonating with rank-and-file workers, potentially boosting his chances in states with large white working class populations.

And given that Bernie Sanders blasted Clinton's record on free trade agreements, there's already a substantial constituency within the Democratic Party that's skeptical of Clinton's credibility as an economic populist. Even if Trump can't convince many Sanders backers to vote for him, he may at least depress their support for Clinton — which could make all the difference in a close race.

Still, if Trump holds the states GOP nominee Mitt Romney won in 2012 and adds Ohio and Pennsylvania, that only gets him to 244 electoral votes — 26 short of the 270 needed to win the presidency.

So there's no path to victory for Trump without winning demographically diverse states — but that may not be as tall an order as you think.

A Monmouth University poll of Nevada released Monday showed Clinton with just a 45% to 41% lead in a state President Barack Obama won by a nearly seven-point margin four years ago, while the RealClearPolitics average finds Clinton up by about four points in both Florida and Virginia, whose growing diversity helped power Obama to victory in 2008 and 2012.

And as the Washington Examiner's Byron York noted Sunday, the Pew Research Center finds that Trump — for all his image woes with Hispanics — actually trails Clinton among those voters by less than John McCain and Mitt Romney trailed Obama in 2008 and 2012, respectively. If Trump actually manages to improve on Romney's Hispanic support, that could help push him over the top in Florida, which Obama won by less than a percentage point in 2012.

Any number of events could scramble the electoral dynamics over the next four months: A sharp downturn in the economy (though that looks less likely after Friday's robust jobs report), a major terrorist attack or new revelations regarding Clinton's email arrangement (the Justice Department may have closed its investigation, but there's an ongoing federal lawsuit brought by a conservative legal group), to name but a few.

The sniper attack on Dallas police officers on Thursday may offer a prime case study. The attack could broaden the appeal of Trump's "law and order" message, experts say, and Trump's measured response to the shootings — a sharp contrast to how he responded to last month's attack on Orlando's Pulse nightclub — suggests that some voters may come to see the mogul as a more plausible president in the months to come.