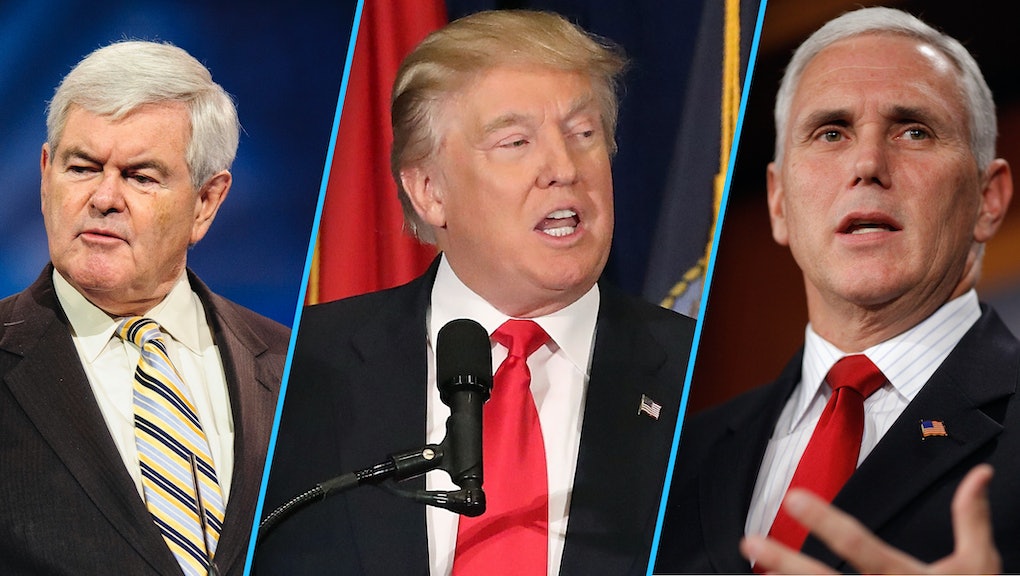 Who Will Donald Trump Pick as His Vice President? Here Are Our 100% Accurate Predictions

With Donald Trump just days (hours?) away from announcing his vice presidential pick, the political world is abuzz with dissecting the pros and cons of each candidate on his short list. But forget who Trump should pick — who will he pick? The Mic Policy team hashed it out on Slack on Monday to lock in our predictions. Tweet yours to @PolicyMic:

Stefan Becket, editorial director, Policy: Hi, folks. It's veepstakes week, so, in the spirit of the Trump campaign, let's try something different and put our predictions out in the open.

Who do we all think Trump will pick as his vice president? He says it's happening this week. Luke?

Luke Brinker, politics editor: There's growing buzz that it's going to be Mike Pence, the governor of Indiana and a big favorite of social conservatives. Republicans in Indiana are already maneuvering to replace him on the gubernatorial ticket, and given that Pence endorsed Ted Cruz in the primary, Trump may find him attractive as a figure to unify the party.

But the fact that I'm increasingly convinced it'll be Pence is the strongest evidence it won't be — Trump has consistently defied predictions, not least my own.

Stefan: Weird, I don't see a prediction in there.

Celeste Katz, senior political correspondent: I probably have a better chance of picking the Powerball than figuring out what Donald Trump plans to do, but Mike Pence is my guess. As a governor, his executive experience includes budgeting, haggling with interest groups and negotiating with lawmakers. His Congressional tenure fills a knowledge gap Trump needs to address.

Other candidates have their strengths but arguably overwhelming weaknesses: Newt Gingrich has been out of politics for a long time, yet manages to remain divisive. Chris Christie's presidential bid died on the table in New Hampshire and he's still lugging his Bridgegate baggage. Sarah Palin doesn't scream "change," and Michael Flynn could alienate the base voters Trump must retain while also courting independents.

Pence may not be the most thrilling choice, but the Trump campaign probably needs less internal excitement, not more.

Stefan: Are any of Saddam's sons still alive?

Luke: What about his daughters? Trump cherishes women. Believe me.

Emily Cahn, senior political writer: I think Ivanka would be a better pick than Pence — who I continue to believe is a truly odd choice. If Republicans in Indiana — a pretty deep Red state — think Pence is damaged enough to want him off the gubernatorial ticket, I can't imagine why the political professionals on Trump's campaign think he would help Trump win votes in swing states. Ivanka would fit with Trump's penchant for the dramatic. We've never had a father-daughter ticket, or a ticket with two family members in general. And she's proven to be the one person who seems to reel Trump back in when he veers off and makes out-of-the-box (read: offensive) remarks.

Still, I doubt he'll choose her as his running mate. I'm going with Newt. Out of politics for years, Newt has nothing to lose, and has shown he has no qualms defending Trump's policies.

Stefan: Finally the correct answer! It's Newt. Although I do like the idea of Trump vetting Ivanka.

I think it's Newt, too. They seem to get along well, and I imagine that's more important to Trump than checking a few political boxes, although he does that, too. I think Trump's main consideration will be "do I like this person?" and I'm not sure he and Pence have that kind of relationship. Newt's also been very savvy about channeling Trump's frame of mind, most notably helping him craft that ridiculous Frozen tweet from Trump Force One last week.

Celeste: I can see why Gingrich fulfills some of Trump's needs — and if he wants someone who's got an issue with the Clintons, fine. But Trump has run against Washington insiderism. Newt Gingrich would be a direct contradiction of Trump's message that he wouldn't bring "more of the same" to the White House.

But as far as Gingrich being a cool, calculated second-in-command...

Emily: A GOP ticket with six wives between them. It would continue 2016's streak of breaking every law of politics.

Luke: As far as Washington insiders go, though, Newt's a pretty good match for Trump. He's a flamethrower — against Democrats, many fellow Republicans, and the media. He may be establishment, but so is Trump, in a sense — the man's donated to politicians of both parties for decades, and he lives in a Fifth Avenue penthouse!

Stefan: What do we make of the Flynn trial balloon?

Emily: The Flynn as VP talk will be as fleeting as the Bill Kristol-led David French trial balloon. Not gonna happen.

Celeste: Flynn's Army experience and willingness to go slash-and-burn on Hillary Clinton could be good for Trump. Also plays into Trump symbolism: Putting a retired general on the ticket speaks to his talk about a stronger military and his promises to take care of U.S. veterans. But some of his other comments, including on social issues, are confusing and/or distracting.

Luke: Exactly. The last thing Trump needs is someone who's been all over the place on abortion in the span of two days. I could see a Flynn selection playing out as a reverse Sarah Palin: He'd obviously be well-versed on foreign policy issues, but stumped by a lot of domestic policy questions.

Stefan: This all assumes Donald Trump is a rational political actor, does it not? I was half-kidding about Saddam's kids.

Emily: As Trump told the Washington Post, though, VPs rarely change anyone's mind. I think Trump should go for someone totally out of left field. My pick is Maine Gov. Paul LePage. He's got electoral experience, and was Trump before Trump was cool.

Stefan: Yes. I wouldn't be shocked if it was someone not on the short list. Palin was barely vetted, right?

Celeste: She was vetted to an extent. But she was also chosen as a high-stakes gamble. She was younger, female, exceptionally popular among GOP governors, had media experience as a former TV reporter. She made the 2008 convention thrilling, but Wasilla ended up a long way from Washington.

That said, let's get back to Ben Carson.

Ok, so, let's lock these in. Luke and Celeste are for Pence. Emily and I for Newt. Speak now or forever hold your peace.

Emily: I'm picking Newt. But like all of my predictions this cycle, it's probably completely wrong and he'll pick someone none of us have talked about. The hallmark of 2016.

Celeste: See my own earlier Powerball caveat. Also important: Trump is a showman. "The Apprentice" was a show based on suspense and plot twists. It wouldn't blow my mind if he picked someone totally out of left, or in this case, right, field. That's his trademark.

Stefan: The tiebreaker will be when he makes the announcement. Or rather, when he leaks it to Robert Costa. Price Is Right rules — closest to the time without going over. I say 4 p.m. Tuesday.

Emily: Tuesday, right when Bernie comes out with Hillary. 11 a.m.

Celeste: I think this whole prediction contest is rigged.