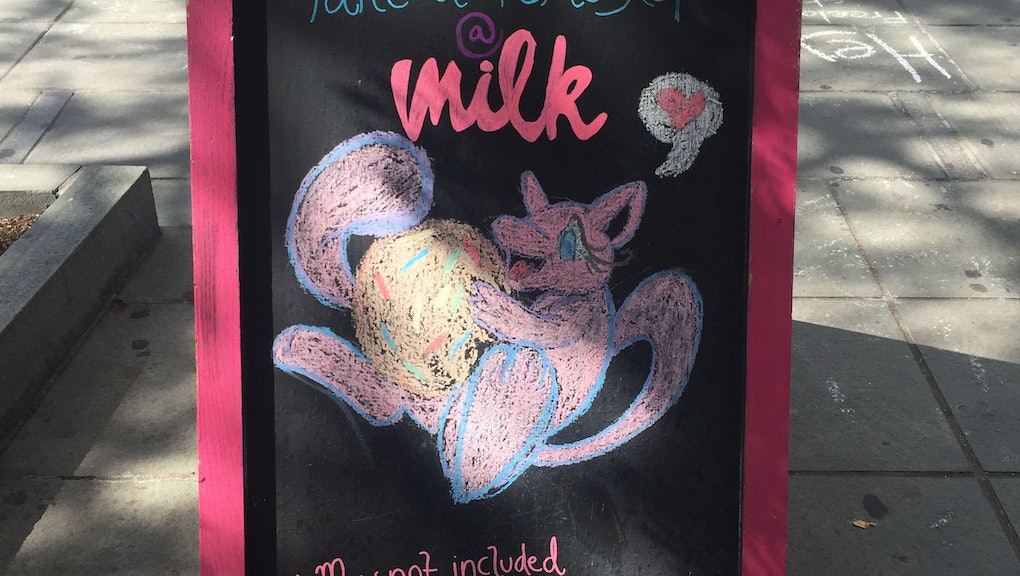 Restaurants Are Catching All the Customers Thanks to 'Pokémon Go'

Pokémon Go may be bad for your phone's data (and the general awareness you have for your surroundings), but it's proven to be very good for the restaurant business.

The game, which has become so popular that it's set to surpass Twitter's daily active users, has hoisted hoards of people from their couches into the outside world to try and catch Pokémon. And while doing so, they've happened upon great places to eat.

A number of landmarks, including local restaurants, are designated as PokéStops, which are places where players can restock on items like pokéballs and Pokémon eggs. This has led many users to stop into watering holes and eateries to refuel after snatching up a new character, which is great for local businesses.

The 'Pokémon Go' effect is real: Jeffery Kaune, the general manager of the Bremerton Bar and Grill in Bremerton, Washington, said the app has caused a surge in business. "I estimate that we've had between 25% to 50% more business this weekend due to Pokémon Go players," he said in an interview.

In fact, the uptick in customers brought on by Pokémon Go has been so great that the restaurant's parent company sent an email to all of its restaurants, encouraging its staff to pay attention to the game for the benefit of the company.

"My staff told me that we are a Pokémon hot spot," said Kaune, who has downloaded the game himself. "I think that because we are near the water, we have a lot of different and interesting kinds of Pokémon." Most of the players come into the restaurant in big groups, and Kaune said it's easy to see who's playing. "They usually pace outside around their phones for a minute before coming in."

When gamers are brought into the restaurant by Pokémon, they usually become customers. "Catching the Pokémon [is] why people end up here in the first place. I had a customer that was so enthralled in the game they showed up in pajamas." Kaune said, later noting "everyone buys food and drink. Customers will often chat with other people in the restaurant also playing the game. It's a nice ice breaker."

Reports across Twitter reveal that plenty of other restaurants are seeing a Poké-uptick in business:

Pokémon Go is a whole new kind of game for the business-minded: Restaurants that are paying attention have worked the Pokémon effect to their advantage: Some are offering Pokémon Go-based promotions to further lure in hungry gamers. For instance, Texas-based chain Zoe's Kitchen is offering $25 gift cards to customers who tweet out a photo of themselves with a Pokémon at one of the company's locations. CitySen Lounge in Michigan is offering a discount to players, Business Insider noted. And even Kaune said he is considering adding a Pokémon Go special to the menu to capitalize on the weekend's success.

The game might be a cost-effective way for restaurants to market themselves. Within the app, players are allowed to purchase Lure Modules. When one is deployed at a PokéStop, it increases the number of Pokémon that gravitate toward that particular location for 30 minutes, allowing any player in the area to benefit if they stop by — so deploying a Lure Module could ostensibly lure in more Poké-hungry customers. According to Twitter user Sebastian Fung, who did the math, a Lure Module would only cost the restaurant $1.17 per hour to use. Not too shabby.

Tang Hui, a high-end restaurant in Sydney, Australia, is already implementing this sneaky-smart tactic. On its Facebook page, the restaurant advertised that it would activate Lure Modules during certain windows of the day.

Poké-don'ts: While other restaurants are likely to follow suit (Kaune, for one, said he would consider using Lure Modules), not every businessperson is enthusiastic about the game's popularity. The manager of a bar in Brooklyn for instance, won't be purchasing a Lure Module anytime soon.

"I am unaware of any Pokémon-related stops or groups coming into the bar," the bar manager said in an email. "[I] have no interest in Pokémon, Pokémon-related business tactics or any human being on Earth that plays children's games on their phones."

Well, that's one less person trying to catch them all.