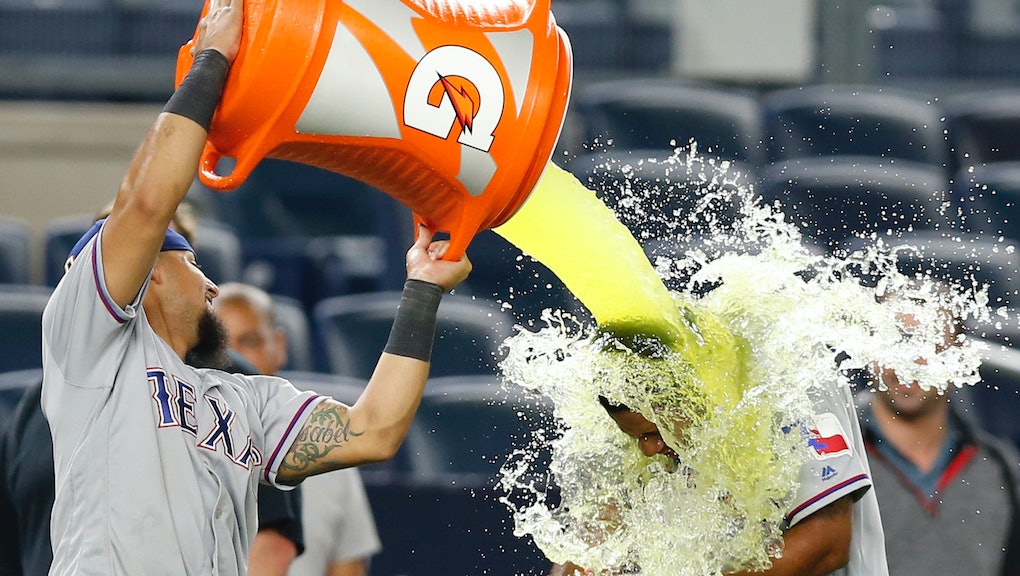 Very few people actually benefit from drinking Gatorade. Are you one of them?

Just in time for the Rio Olympics, Gatorade has produced several ad spots featuring Olympic athletes. In one heartwarming spot titled "Never Lose the Love," Olympians including Serena Williams, April Ross and Kevin Durant get coached from their younger selves and, of course, squirt Gatorade into their mouths.

A new Powerade ad spot also contrasts a child athlete and mature Olympian. Olympic boxer Shakur Stevenson is shown throughout his journey from a young fighter in Newark, N.J., to a strong boxer taking down opponents in the ring.

It's not surprising that Gatorade (owned by PepsiCo) and Powerade (owned by Coca-Cola) are targeting kids, or that they're capitalizing on the Olympics. The iconic "Be Like Mike" Gatorade commercial from 1992 implies drinking Gatorade makes someone like Michael Jordan. Many brands, including junk food companies like Hershey's, try to associate themselves with elite athletes during events that yield such global attention.

Children who need to rehydrate and replenish with electrolytes, minerals like potassium, sodium and magnesium, after an hour of exercise could get the same benefit from water and a small piece of fruit, the Wall Street Journal reported. A 20-ounce bottle of Gatorade has 34 grams of sugar and provides 75 mg of potassium, while a small clementine and banana deliver 131 mg and 422 mg, respectively, of potassium. The drinks are designed for elite and collegiate athletes, not growing children, the Wall Street Journal pointed out.

But there's a health halo hovering over sports drinks

"Energy and sports drinks are marketed in a way that imbues them with a healthy halo,"  Dr. David Ludwig, director of the New Balance Foundation Obesity Prevention Center, told Thriving, the Boston Children's Hospital's pediatric health blog. The danger: Since sports drinks seem healthy, many people will drink even more of them, Ludwig pointed out. The American Academy of Pediatrics advised that parents should not let their children drink sports beverages unless they are participating in a multi-hour sporting event like a soccer tournament.

Gatorade delivers a wallop of sugar in each bottle. In a 12-ounce, 80-calorie serving of Gatorade's Thirst Quencher, there's 21 grams of sugar — two grams more than the sugar in four pieces of Twizzlers. Sugar happens to be the second ingredient on its label, listed after water. Powerade isn't far off, either — 12 ounces of "Mountain Berry Blast" also contains 21 grams of sugar.

That sugar can pack on pounds. In a 2012 study published in Obesity, researchers found that teens put on more weight if they drank a sports drink per day than if they drank a soda per day. Over the two years of the study, teens gained an average of two pounds per sodas consumed each day. Teens gained an average of 3.5 pounds per sports drinks consumed each day.

"Sports drinks go under the radar," Alison Field, a lead researcher, explained. "The danger is that they're sold as being part of a healthy lifestyle, of being active." Case in point: Gatorade and Powerade's latest ad spots with Olympians.

Who needs Gatorade and Powerade?

If you don't sweat a lot when you exercise, probably not you.

"The drinks are widely misused, providing electrolytes of unlikely value and sugar and calories that do harm."

But generally, Katz sips on haterade when it comes to Gatorade and similar beverages. "The drinks are widely misused, providing electrolytes of unlikely value and sugar and calories that do harm," Katz said.

Here's who can benefit from sports drinks: Athletes who exercise vigorously.

The American Council on Exercise recommends using a sports drink for exercise sessions that last anywhere from 60 to 90 minutes, but the organization notes that electrolyte loss depends on how much an athlete sweats and whether he or she is a "salty sweater," someone who sweats out a greater than normal concentration of sodium. In 2014, 20.8% of U.S. adults met the 2008 federal physical activity guidelines for both aerobic and muscle-strengthening activities, according to the Centers for Disease Control and Prevention. These guides recommend muscle-strengthening activies at least two days a week, and two hours and 20 minutes of moderate-intensity aerobic exercise, according to Health.gov. These guidelines do not include swimming four laps of an Olympic-sized pool in under two minutes.

Adults should also do muscle-strengthening activities that are moderate or high intensity and involve all major muscle groups on 2 or more days a week, as these activities provide additional health benefits.

If someone is sweating heavily over an extended period and they're unable to eat, then he or she would benefit from electrolyte-fortified beverages, Katz said.

Why the hubbub over electrolytes? Excessive sweating causes the level of electrolytes — like sodium, chlorine, calcium, potassium and magnesium — in your body to change. This throws off bodily processes like muscle activation, the U.S. National Library of Medicine says.

You can get electrolytes from a healthy diet. Bananas, dairy, spinach, potato skin, and other foods can be good sources of sodium, calcium, potassium and magnesium, the American Council on Exercise noted.

However, humans can absorb nutrients from fluids faster than solid foods, Katz noted. Plus chowing down on snacks in the middle of an exercise session, or competition, can cause an upset stomach — so vigorous, prologued exercise is the rare case when these drinks can come in handy.

If your morning commute or 30-minute jog has you feeling thirsty, reach for water. Gatorade and Powerade won't make you, or your kids, any fitter, faster or stronger. Odds are good you'll pack on pounds, not muscle — and you won't look anything like the toned and fit athletes in Gatorade and Powerade ad spots.

Drinking sports beverages is drowning your body in unnecessary sugar, and that's worse that a neon-colored, ice-cold Gatorade shower.