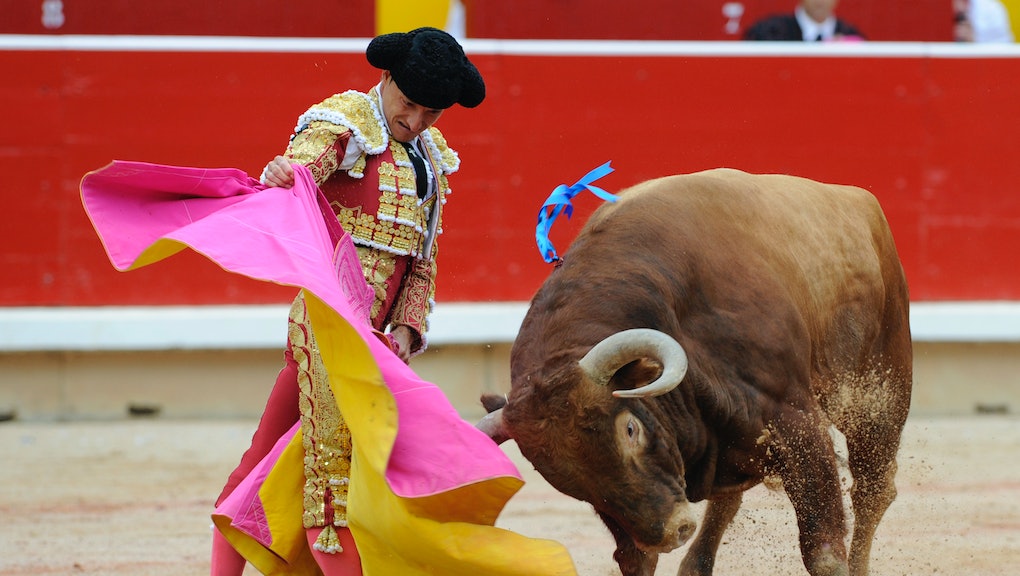 Victor Barrio, the 29-year-old bullfighter, was knocked to the ground by a half-ton bull while attempting a move called a "muletazo," according to the Telegraph. As spectators, including Barrio's wife, looked on — and as live TV cameras rolled — the bull gored Barrio in the chest.

Medics rushed to Barrio's side, but the matador died in the bullring's infirmary, according to the Associated Press. Hundreds attended a funeral mass for Barrio in Sepulveda, Spain on Monday.

Graphic footage of the bullfight has been posted to YouTube.

The last time a Spanish matador died in the bullring was in 1985. José Cubero Sánchez — known as "El Yiyo" — was fatally gored in the left side by a bull in a "dying rage," the New York Times reported.

"As Yiyo began to turn to acknowledge the cheering, the bull, not falling, charged in a dying rage, ignoring the capes of assistants trying to distract it," according to the 1985 Times article. "Within seconds, the bull flipped Yiyo on the ground, stuck him in the left side with a horn, lifted him into the air and shook him like a rag doll."

In 1987, Colombian bullfighter Pepe Cáceres died after being gored through the lung, the Telegraph reported.

Records show approximately 533 professional bullfighters have been killed in Spain since 1700, the BBC reported, referencing Alexander Fiske-Harrison's Into The Arena: The World of the Spanish Bullfight. Many more have been injured; a total of 31 matadors were gored in 2013, according to the Telegraph.

Many say bullfighting should be banned. In fact, Victor Barrio's Facebook page was taken down after several visitors wrote posts saying he "deserved to die," according to the Telegraph.

"May you be attacked by bulls all of your entire afterlife, so you forever feel the pain but can never die. Good riddance. Adios," Facebook user Machteld Huylebroeck wrote.

People for the Ethical Treatment of Animals says approximately 40,000 bulls die in bullfights each year.

Spain still holds around 2,000 bullfights per year, but the popularity of bullfighting has been dwindling in recent years, according to Business Insider. Leftist politicians have been allocating public funds toward other initiatives instead, and certain regions of Spain have even banned bullfighting altogether.