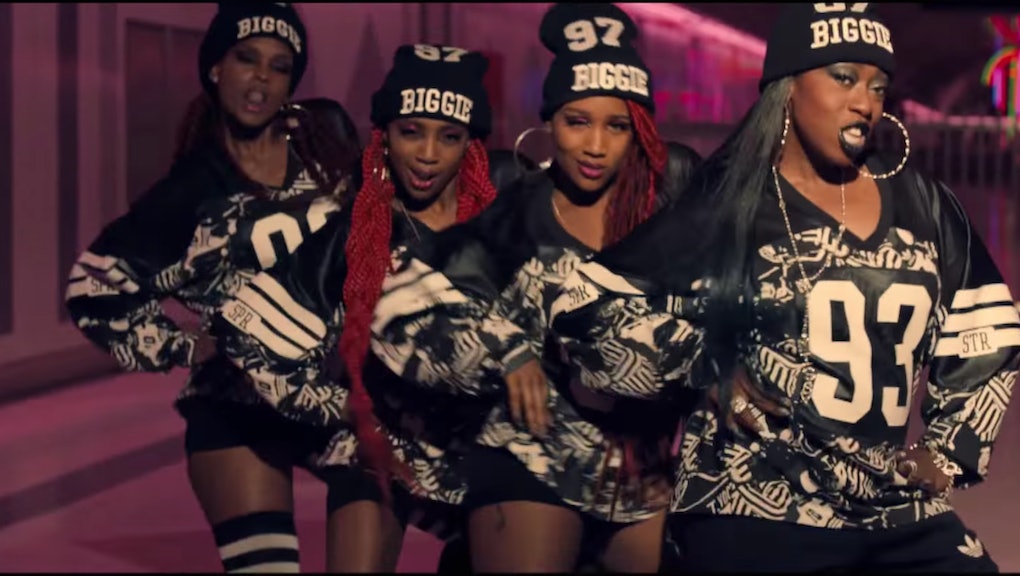 Missy Elliott Is the G.O.A.T. Because of Her Sexual Lyrics, Not Despite Them

Rap icon Missy "Misdemeanor" Elliott received her due as one of the pioneering women in hip-hop on Monday night's VH1's Hip-Hop Honors, which was titled "All Hail the Queens!" and recognized the often-ignored contributions of women to hip-hop.

While Missy got her due onstage, fans on Twitter also weighed in on Elliott's legacy, which included one tweet that made the internet lose control.

Aside from the obvious misogyny of implying a woman must be desexualized to be the greatest, many reminded that Twitter user that Missy did, in fact, talk about sex — and often — coming at the topic from a place of empowerment.

Missy Elliott entered the hip-hop arena with the kinky Mary-Jane-and-chill anthem "The Rain (Supa Dupa Fly)" in which she famously danced in an inflated trash bag. The track talks of Missy's desire for sex, but the video refuses to make her sexuality about her body, denying the male gaze its entitled gawk.

On her second single, "Sock It to Me," Missy drops the games and adopts a sexually frank, explicit tone. And, throughout, she dictates how it's going to go down.

"I was looking for affection so I decided to go

Missy's next few singles followed suit and embraced a sexuality that was demanding and dominating instead of inviting. She defined her sexuality around female pleasure and empowerment rather than male pleasure, which is perhaps why some men didn't find her to be sexual. Missy's sexual invitations weren't open — they were conditional and came with a set of stipulations.

On "Hot Boyz," Missy offers to help a man, but only after making him super self-conscious about his earning potential.

On "Get Ur Freak On," Missy boasts about her prowess when she says she's "lasting 20 rounds," while on her next single, "One Minute Man," she bemoans the kind of man who can't keep up with her sexual skills for more than 60 seconds.

"Tonight I'mma give it to you, throw it to you

And, at the height of her popularity, she released the fast-moving, come-hither sex anthem "Work It," which was more confrontational than cooing.

"I'm not a prostitute, but I could give you what you want

Prior to Beyoncé's "6 Inch," Elliott also spoke about the power that comes with getting your paper — even if that paper comes from stripping.

Missy celebrated her sexuality without adopting a hyperfeminine (read: hyper male-centric) presentation, which made her sexuality both more revolutionary and harder for men to consume, appreciate or see themselves in.

Complicating that reality was her own body. In the United States, being a person of size also means being de facto desexualized, but Missy still drew attention to her body, in ways most other artists don't dare. She owned her body and had fun with it in way people of size aren't usually allowed to. She adorned it in trash bags, making it made her body malleable — unbreakable, even.

She spoke about her body often in her songs — "See my hips and my tips, don't you/ See my ass and my lips, don't you" — visually, her body defied expectations.

In the "Get Ur Freak On" video, her neck became elastic and she removed her head from her body.

In the "Lose Control" video her CGI head appeared on a smaller, twerking body.

When someone says that Missy became the greatest rap icon of all time because she wasn't selling sex, they're not only wrong, they're misunderstand Missy's entire visual and aural oeuvre. Perhaps they didn't read Missy as sexual because Missy's sexuality was not for them. Missy's sexuality was about empowering women, regardless of body type or size, to demand pleasure on their own terms.

Now, go out and work it.